I remember seeing him the first time. It was in Biel when it was announced that the two dying watch groups ASUAG and SSIH were going to merge and he would try to rescue them.

Both then, it was the early 1980s, had brands that were household names – Omega and Tissot. He saved them and other ailing brands.

Hayek did not invent the Swatch but he was instrumental in pushing the brand name and, of course, making the group what it is today – the world’s largest watchmaking concern.

When the Swatch watch came of age, there was a wonderful party in Zermatt, at which Hayek spoke of his most favourite poem – If by Rudyard Kipling. He mentioned it several times in later speeches. He obviously loved it. (See sidebar)

He walked through Zermatt and was feted by many hundreds of people.

Then after a few more years he went on to buy Breguet – a stroke of genius from someone who started life as a consultant in Switzerland with an office in Zurich without a telephone. He had to go to the post office across the road to make calls.

The man went on to prove that he was a king of the watchmaking industry. And he loved his Breguet brand – he was the CEO - to the extent that he spent SFr2.3 million ($2.12 million) at an auction in Geneva in May to buy valuable original documents from arguably Switzerland’s greatest watchmaker – Abraham-Louis Breguet.

I once asked him why he had fired some of his top managers. His answer was typical: “They are getting too arrogant and forgetting the business.”

He will be remembered by some as a patriarch who stood no nonsense. I asked him about that too and he replied that he had more than 150 factories to keep going and more than 23,000 thousand employees that he wanted to keep in a job. There was no room for complacency.

And he could not stand the thought that industry would leave Switzerland.

Nicolas Georges Hayek will be remembered as a small but great man of Swiss recent history – one who hated the stock exchange for its whims over the Swatch Group’s performance.

You always knew where you were with him. He always had a definite point of view.

But he could also be very warm hearted and approachable. He wrote a moving inscription to me in his autobiography, thanking me for the “wonderful and substantial radio interviews of the last 25 years”. (swissinfo was formerly Swiss Radio International.)

Some of his top management will say that he could and would speak his mind in no uncertain terms. But most stayed loyal and stood by him and made the group what it is today.

Swiss watchmaking has over the past few years been in a pretty good shape and it has a lot to do with Hayek, who cared for what was going on in the watch sector.

Hayek will be sorely missed not only by his family but also by Switzerland as a whole. He will be hard to replace.

If by Rudyard Kipling

IF you can keep your head when all about you
Are losing theirs and blaming it on you,
If you can trust yourself when all men doubt you,
But make allowance for their doubting too;
If you can wait and not be tired by waiting,
Or being lied about, don't deal in lies,
Or being hated, don't give way to hating,
And yet don't look too good, nor talk too wise:

If you can dream - and not make dreams your master;
If you can think - and not make thoughts your aim;
If you can meet with Triumph and Disaster
And treat those two impostors just the same;
If you can bear to hear the truth you've spoken
Twisted by knaves to make a trap for fools,
Or watch the things you gave your life to, broken,
And stoop and build 'em up with worn-out tools:

If you can make one heap of all your winnings
And risk it on one turn of pitch-and-toss,
And lose, and start again at your beginnings
And never breathe a word about your loss;
If you can force your heart and nerve and sinew
To serve your turn long after they are gone,
And so hold on when there is nothing in you
Except the Will which says to them: 'Hold on!'

If you can talk with crowds and keep your virtue,
' Or walk with Kings - nor lose the common touch,
if neither foes nor loving friends can hurt you,
If all men count with you, but none too much;
If you can fill the unforgiving minute
With sixty seconds' worth of distance run,
Yours is the Earth and everything that's in it,
And - which is more - you'll be a Man, my son!

The patriarch of the Swiss watch industry, Nicolas G. Hayek, has passed away at the age of 82. Hayek died of heart failure in his office in Biel ...

The fact that watchmaking giant Swatch outperformed its competitors last year amid a disastrous export market is no surprise, says one industry ... 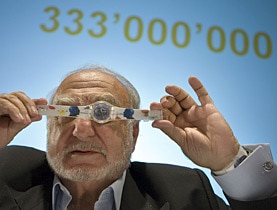 Swatch clocks up a quarter of a century

The Swatch watch passed another milestone on Saturday as it celebrated the 25th year of its first sales in Switzerland. While there were plenty ...

Nicolas Hayek, a look back

Celebrating the life of Switzerland's best known watch entrepreneur. The patriarch of the Swiss watch industry, Nicolas G. Hayek, passed away on ...