Poverty was still widespread in rural Ticino in the first half of the 20th century, as this account from a woman who grew up in Val Verzasca confirms.

Clementina Rusconi, born in 1905, was one of 31 people from Val Verzasca interviewed by Franco Binda for his book I vecchi e la montagna (The old people and the mountain), published in 1983 by Armando Dadò.

The interview was originally transcribed from the local dialect into Italian. Binda attempted to maintain the spontaneity and colour of the dialect, and therefore many of Rusconi's words and sayings have been kept.

The vipers did not want me (I ma vanzóo i sirp)

"Once when my mother was seven months pregnant (la specèva da crompèe), she was haymaking (sii in di Banch) in the woods above Pianesc, in the Brione area. On the way down, with a load of hay on her shoulders, she slipped and fell. She was very lucky, because her brother-in-law, who was a little farther down, managed to catch her, grabbing hold of her clothes and keeping her from going over the cliff. Fortunately, in those days they wore thick, very heavy clothes that you couldn't tear even if you tried.

My mother's name was Maria. There were ten of us, three brothers and seven sisters, making twelve in all with our parents. Now there are only two of us left, me and my sister Anna, who lives with me. Our mother died young, when I was eight and my sister five. In 15 years, she gave birth to ten children. People now say we lived that way because we were ignorant, but it is not true. We lived in extreme poverty. Anywhere it was possible to get a handful of grass, we would cut it. We were not ignorant, we just didn't have any money. For a day's labour, from sunrise to sunset, we were paid SFr1.50 and, even when we could get that sort of work, eating polenta and cod was a luxury.

We would cut wild hay in the area known as Al Valee, above Daghéi, opposite Capelina (Val d'Osola). We worked in the shade (da óv). I would go with my sister and my brother Vincenzo, and our sister Lucia. At Al Valee there were no caves (spriigh) to shelter in, so we built a little hut (baita). If the weather was fine, we were alright, but if it rained water came in everywhere. It was like one of those huts you see when they show pictures of primitive peoples in Africa. All in all, we were unaware of our precarious situation and were more contented than people are now. When we left, we took just a few necessities, as well as a blanket (drapótn) and an apron to put under our heads for a pillow, and we slept like logs. The night passed quickly. Pa did not come with us because of his asthma. He stayed in the village and told us to light a fire at night. This was to reassure him, a sign we were still alive.

Once, when I was not there, my sisters had begun to mow the grass on a steep section of slope (tnedée) and it was foggy. They lost their bearings and, instead of starting at the top as usual, moved out of the area and did not realise their mistake until evening, when they came up against the rocks. Sometimes people stole these tnedée from one another. They went to reserve them at night, even thought it was against the customary rules.

When we got wet, we tried to dry ourselves round the fire, at midday or in the evening. If it rained, we did not leave the area immediately, hoping the weather would improve, but if we saw it was going to flood, we went back to the village. We did not use a scythe, just a sickle (médora). There was a place here that was very difficult, very steep, and when we carried the hay down, the goat we took up with us for milk always walked along beside us. It never walked on the cliff side, but always let one of us walk on that side. It came with us on all our journeys because we petted it. It was fond of us. Goats are cautious animals. They never walk below you, always afraid of being swept down. This one, I remember, was called Topett. There was another we called Ghignom because it always seemed to be smiling. We also had a lamb that came with the goat. It always wanted to sleep with us, lying on our feet, but sometimes it urinated at night, soaking our mattress and our feet. Drinking water was also often a big problem. We looked for water dripping from a rock and left a container beneath it all day, so we would at least have plenty of water in the evening. Sometimes the water was so far from where we were working that we did not go to fetch it. So we could not even wash.

For us, shoes were a minor consideration. It did not bother us much, because we were used to going barefoot. In our family, we have always been lucky. We have never got bitten by vipers. I always used to say "i ma vanzóo i sirp". What does that mean? The vipers did not want me. Our dad always told us to strike the sickle on the rocks, then they would draw back into their holes. Then there was another saying that vipers run away from Christians. Of course, we used to pray in the evenings and recite the rosary, and among the other favours we asked was to be preserved from snakebites. The other danger – the greatest in fact - was that of falling. Lodovico had had a fall, but not when haymaking, on the alpine pasture, and also poor Tranquil Mocettini, when he was very young. Considering the risks we ran, we came out of it well enough. But if I were to live my life again, I would never go hay gathering!

Once people came from outside the valley to take revenge. They deliberately started a fire. The fire started around the Lögh, beyond the Posse de Soriröö, and burned all the area of Lögh as far as the Corona del Medée. It was forbidden to start fires, but on that occasion they did it at night, surreptitiously, to do harm. The fire spread as far as the Tenc pasture. [...]

Why didn't I marry? I didn't marry because, unfortunately, my experience with men was only of falsehood and cheating. Afterwards, I could not believe even in those who were sincere and behaved decently. You can't marry someone you don't love, just for the satisfaction of having a husband. And I didn't find another one I could love.

The last person to go cutting wild hay in Val Verzasca was undoubtedly Rocco Panscera. His sister, Isolina still lives in the Val d'Osola, alone with her cats. She has 17 of them, they say. [...]

When someone cut a finger with their sickle, we would apply l'erba sèra (a plant of the milfoil family) to the wound. It was also the custom to use a kind of cobweb which formed on the trees, in which there were small insects. You sometimes see them hanging from the branches, whitish, and long as a swarm of bees."

In the early part of the 19th century, the rate of illiteracy in Ticino was very high. There were few schools and teachers despite a law that established compulsory education.

The schools that did exist were reserved for boys. However they were often absent, having to work on the family farm.

In the 1830s, statesman Stefano Franscini laid the foundations for the creation of a modern education system in the canton. Thanks to the reform, many people were able to migrate abroad with some basic education.

Franscini later expanded his thinking beyond the canton and, in 1855, contributed to the founding of the Federal Institute of Technology in Zurich.

It's the break of day. Inside the kitchen of a cramped, two-room house, polenta is being cooked over an open fire, filling the kitchen with smoke.

Rural Ticino as it once was

Esterina Perozzi Remembering a life in the mountain village of Sonogno

Born in 1921, Esterina Perozzi has lived her entire life in Sonogno, the village at the end of the Verzasca valley. She recalls the times when ... 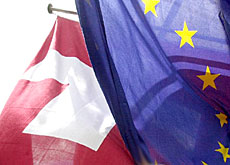