Exactly 25 years ago Swiss voters approved the Alpine Initiative, which aimed to shift the transport of goods through the Alps from road to rail, in a landmark decision. Although the targets have yet to be met, the president of the initiative remains optimistic.

The result on February 20, 1994 was a surprise. Just over half of voters (51.9%) and 19 of Switzerland’s 26 cantons came out in favour of the road-to-rail plan and against extending the road network.

The decision marked a turning point in Switzerland’s transport policy. It had implications for a vote in 1998, when voters ratified a tax on heavy vehicles and a project for funding public transport, and then in 2004, when a parliamentary proposal aimed at doubling the capacity of the Gotthard road tunnel was defeated at the polls.

But implementing the Alpine Initiative has turned out to be complicated, notably because it calls into question Switzerland’s relationship with the surrounding European Union.

The compromise solution, written into the Federal Law on Transporting Goodsexternal link, is a maximum of 650,000 crossings by lorries a year through the Swiss Alps two years after the opening of the Gotthard rail tunnel. This opened in 2016, yet the number of crossings remains above 900,000.

Jon Pult, president of the Alpine Initiative and a member of the leftwing Social Democratic Party, shared his perspective on the situation.

swissinfo.ch: Twenty-five years after the vote, the number of lorries remains much higher than what is allowed by law. What’s more, in 2016 voters backed a plan to build a second Gotthard road tunnel. How frustrated are you by these developments?

Jon Pult: It depends on if you view the glass as half-empty or half-full. Sure, you can criticise the fact that we’ve yet to reach the set targets. But on the other hand, thanks to the Alpine Initiative, Switzerland’s transport policy has developed very differently from the international trend. Switzerland changed its transport policy model thanks to the Alpine Initiative. There used to be 1.5 million lorries crossing our Alpine passes, whereas today there are just over 900,000. But that doesn’t mean we’ll stop working hard to reach our goals.

swissinfo.ch: The promoters of the Alpine Initiative hoped it would change the transport policy not only of Switzerland but also of Europe. Has it?

J.P.: If there’s one area where I feel slightly frustrated, it’s the debate in Europe about transport policy. The Alpine Initiative supports the idea of an Alpine crossing exchange [in which transport companies trade transit rights]. This is a project that can be realised only at a European level, in collaboration with Austria, France, Italy and Germany. But we haven’t managed to find a political majority, especially at the level of central governments, which are too far from the Alps. And even Switzerland hasn’t truly fought for the idea.

swissinfo.ch: Today the ecological debate is dominated by climate change. To what extent has this new perspective influenced your political work?

J.P.: The climate catastrophe is clearly an issue for our future and we ask ourselves what we, an organisation that works to protect the Alps, can do for the issue of climate protection, which is a global issue. Whatever the answer, we have to show that the risks for the Alps are even greater than for other regions if we can’t at least respect the targets of the Paris Climate Agreement.

In addition, even if it’s true that lorries are much cleaner today than in the 1990s regarding fine dust, not much has changed when it comes to carbon dioxide. The transfer from road to rail therefore remains important for protecting the climate too.

swissinfo.ch: The number of lorries crossing the Alps remains above 900,000. How do you plan to rectify the failure to respect the legal limits?

J.P.: Politicians need to shift their stance and admit their failure. We should certainly wait for the completion of work on the Ceneri base tunnel and the four-metre corridorexternal link [set for the end of 2010] – the technical conditions there will definitely help us. However, we also have to take other measures. The simplest one in the short term is to increase the tax on heavy vehicles, within the limits authorised by the bilateral accords. I see no reason not to do that.

J.P.: Absolutely. I’ve often thought about that when the institutional framework agreement with the EU is discussed. Sure, the content is very different, but the situation is similar. Switzerland wanted to follow a path which, at first sight, wasn’t compatible with European laws. But thanks to effective talks and a certain willingness to compromise, we found a solution which is good for us and compatible with European laws.

So we now have a policy that is more advanced than Europe’s concerning transit traffic and is recognised by our European partners. Considerable pragmatism and a sharp sense of responsibility on the part of my predecessors was the key to the success of the Alpine Initiative. If we had focused on red lines, there would probably be more lorries crossing our roads today.

swissinfo.ch: There is a lot of talk nowadays of the implementation of popular initiatives. Can the Alpine Initiative be considered an example of the smooth running of direct democracy in Switzerland?

J.P.: The pragmatism of the Alpine Initiative has, for me, great democratic value. It’s true that the decisions of the people must be applied, but in politics many things can happen which need to be considered and one has to be ready to compromise. The beauty of the Alpine Initiative lies in the fact that it was a real popular movement, which became indignant when it was necessary to get indignant, but which was always prepared to look for solutions that could benefit everybody.

I like the Alpine Initiative because of its pragmatism. It’s an initiative born from a popular movement and not from the strategies of a political party, and for this reason it has been more constructive.


Translated from Italian by Thomas Stephens

The Gotthard road tunnel needs to be overhauled. To maintain the flow of traffic through the Alps, the government proposes building a second tunnel.

By failing to implement legislation to protect the Alps from transit traffic – by shifting freight from road to rail – the government is violating ... 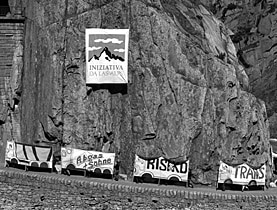 The government is facing renewed calls to speed up plans for a reservation system for heavy-goods trucks transiting the Swiss Alps. The Alpine ...

An increasing number of heavy goods vehicles (HGVs) are being pulled over for motoring offences at border crossings. Customs officials have ...