More than 300 people are killed every year by army guns, according to a study led by the Swiss criminologist Martin Killias.

These weapons play a central role in suicides and Switzerland's grim history of family killings, said the research, published on Saturday ahead of a parliamentary debate on the subject.

The study revealed that private guns and army weapons were used in 36 per cent of domestic murders.

The majority, 60 per cent, of murders outside the home on the other hand involved illegal weapons.

However, army weapons were used in more than two-thirds (68 per cent) of suicides.

Killias said the total number of deaths from army weapons, an extrapolation from data from six cantons, was far higher than he had expected.

The figures, published in the latest journal of the Criminological Institute at Lausanne University, are part of a full study which should be released in the summer.

Killias said it was also alarming that domestic murder happens so frequently – every second murder or attempted murder in Switzerland occurs within the family circle.

"It is undeniable that keeping weapons at home causes major problems," he said, adding that threats involving army weapons should not be forgotten.

For Killias, the keeping of weapons and ammunition at home cannot be justified.

"Do we want to continue accepting the deaths of almost 300 people a year by pistols, rifles and carbines to perpetuate a tradition which allegedly strengthens the will to defend oneself?"

All able-bodied Swiss men aged 20-30 are conscripted for about three months and issued with a rifle, to be used only in the event of an alert.

After initial training, conscripts are required to do three or four weeks of army service a year until they have served a total of 260 days or reached the age of 34.

Throughout this time they keep their rifles and 50 rounds of ammunition at home.

"The misuse of weapons and family dramas could definitely be reduced if soldiers were not issued with ammunition to take home," said Killias, who also called for the sale of ammunition to be drastically reduced.

Although these arguments and demands could gain majority support among voters, they have a tough time in parliament where they face a formidable gun lobby, which puts pressure on the centre-right parties in particular.

The next discussion on revising the gun law is set to take place in the House of Representatives on Tuesday.

Five years ago Switzerland was shocked when a gunman shot and killed 14 people in Zug's cantonal parliament with his army rifle, before turning the gun on himself.

In the first half of 2006 there were at least six incidents where a man shot his wife or partner before turning the gun on himself. In a highly publicised case the husband of former women's ski champion Corinne Rey-Bellet killed her and her brother and seriously injuring her mother with his army pistol before killing himself.

In September the government said family tragedies and suicides were not valid reasons to stop soldiers from keeping their army weapons at home.

Swiss Defence Minister Samuel Schmid, a member of the rightwing Swiss People's Party, argued that Switzerland's militia army needed to be able to mobilise rapidly, "for example to protect airports and railway stations".

Debate on the use of firearms was fuelled in April when the husband of a former women's ski champion, Corinne Rey-Bellet, killed his wife and her brother with his army pistol.

There are about two million firearms in circulation in Switzerland.
The number of suicides is close to 1,500 a year. Suicide accounts for more deaths than car accidents, drugs and Aids together.
Among those demanding tighter gun laws are Amnesty International, the Swiss Peace Council, the Victims of Violence Forum, the Stop Suicide Association, Ipsilon (the Initiative for the Prevention of Suicide in Switzerland) and the Swiss Society of Psychiatry and Psychotherapy. 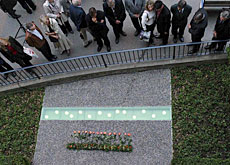 Parliament has been discussing changes to Swiss gun laws exactly five years after the country's worst shooting incident. But observers warn the ...

Why is Switzerland prone to family killings?

The brutal murders of Swiss skier Corinne Rey-Bellet and her brother have once again cast the spotlight on family killings in Switzerland. ...