Residents of the Swiss town of Moutier will soon decide their fate at the ballot box. The question of which canton to join – and their cultural identity – has been simmering for decades.

Currently part of the Swiss canton of Bern, Moutier is a typical small town like any of the hundreds dotting the Swiss countryside. It is nestled at the foot of the Jura mountain range with its imposing rock formations, along the road leading to France. Its friendly people, quiet historic streets, old churches and industrial buildings show few signs of its underlying division.

On June 18, Moutier will vote – for the fifth time in 42 years – on whether to remain part of German-speaking canton Bern or whether to join primarily French-speaking canton Jura. The vote is such a major and sensitive event that the federal government has decided to send in observers.

The Jura-Bern conflict stems from an (almost) peaceful secession that many cite as an example of the Swiss virtues of wisdom, federalism and direct democracy. In the 1970s, the French-speaking territories belonging to Bern formed the new canton of Jura by legal means and by going to the polls.

But of the seven districts making up the Jura coat of arms, three decided to remain part of Bern even though they are French-speaking and have since become even more of a minority in Switzerland’s second-largest canton.

In 2013, those three districts got to vote again on the principle of reunification, and 72% voted to remain. The dream of a Jura that would extend “from Lake Biel to the gates of France” (as the separatists still sing) seemed to be dead in the water. But Bern offered municipalities that felt cheated the option to vote individually on whether to join the canton of Jura. And Moutier, where the winning margin has always come down to just a few dozen votes, seized the opportunity.

“By definition, we don’t belong here. We belong in the canton of Jura. It’s only natural,” says the mayor of Moutier, Marcel Winistoerfer.

To him, not joining canton Jura “makes no sense”. He points out that the town has been electing pro-Jura officials for more than 30 years, a trend he doesn’t want to see “flipped on its head” because of “scaremongering”.

A battle of numbers

Those who want to maintain the status quo deny any scaremongering. Chief among them is Patrick Roethlisberger, town councillor and spokesman for the Moutier-Prévôté group that wants to remain part of canton Bern.

“There is no guarantee that Moutier will be better off in the canton of Jura,” he says, arguing that it’s “a matter of common sense”.  He points out that the increase in purchasing power that experts have said might result from joining Jura could be “swallowed up” by various rises in insurance and vehicle licence plate prices, for example.

“People say we’re standing in the way of progress, but at least with Bern we know what we’re getting,” Roethlisberger says, arguing that canton Jura’s promise of creating 170 civil servant jobs in the region won’t replace the jobs lost by switching cantons.

Embed code
Copy and paste the embed code above.

Citizens on both sides of the Bern-Jura issue - and those who can't decide - share their views.

Then there’s the matter of the hospital, a subject of much debate in Moutier. Canton Jura has an acute care hospital in its capital, Delémont, just 10 kilometres away. “You’re not going to tell me that they will keep them both open,” Roethlisberger proclaims. He points out that Moutier’s hospital has a second branch in the town of Saint-Imier, also in the Bernese Jura, which will have to operate alone if the Moutier location closes.

Moutier Mayor Winistoerfer is fully aware of these arguments and finds it “slightly annoying” that he has to respond to them. He says he always has to refer to an expert report commissioned by the municipality of Moutier and the cantons of Bern and Jura which weighs the consequences of changing cantons. The report’s conclusion is clear to him.

“Becoming part of canton Jura will not make things any more expensive or any more complicated for us,” he says.

When it comes to the hospital, about which city authorities have sought a legal opinion from the University of Lucerne, the mayor is annoyed to see it “being misused to serve any and every purpose” while “no one has a handle on the issue.” He argues that remaining part of canton Bern doesn’t guarantee that the hospital will still be able to provide cutting-edge medical care in the future.

Together, commissioned report and the legal opinion are nearly 300 pages long, which begs the question whether anyone has actually read them. Since the Bern versus Jura issue has always been a deeply emotional one, it is likely that people will vote with their heart rather than with their head even if the situation is much calmer these days compared to during the 1970s fight for independence.

“We are not an oppressed or belittled population. We live in one of the richest countries in the world and enjoy excellent conditions. So we’re not going to take to the streets and clash with the police.”

But that is what happened in April 1975, when the tension between the two camps was palpable. People didn’t greet each other in the street and Mayor Winistoerfer, who was 18 at the time, says he “would never have gone to a pro-Bern shop or restaurant”. Zuber thinks that today’s calmer atmosphere is “a sign of political maturity amongst the population”.

There is no longer a war raging in Moutier between “pro” and “anti”-Bern restaurants, even if the Hôtel de la Gare displays the Jura colours while the Hôtel du Cheval Blanc has remained a fervent Bern stronghold. Three people were sitting at tables at the Cheval Blanc left rather than speak to a journalist. One elderly man who stayed simply refused “to discuss politics in a public establishment”.

“Politics, you see, is a poison that kills friendships,” he declared before discussing the subject anyway, saying he expects that voters will think before casting their ballots and ultimately decide to keep things the way they are because of “everything that Bern does for us”.

At the mechanical workshop owned by Roethlisberger, the pro-Bern spokesman, one of his young employees said he did not want to speak his mind, “because I’m not political”. Does his attitude represent his generation’s lack of strong attachment to the Bern versus Jura issue?

“They are interested but in a different way,” says Mayor Winistoerfer. In the 1970s, people would take to the streets, but these days they prefer to write a comment on Facebook, he argues. And vote observers expect a turnout of more than 80% on June 18, double the average usually seen for Swiss votes.

“We know that two-thirds of the population belong to one camp or the other,” Zuber explains. “Then there are the newly naturalised, those who have come from abroad, and those who are from here but have never wanted to take sides.”

Still, he doesn’t think many voters are truly undecided, since the campaign has been underway for more than a year.

And what if Moutier’s sizeable foreign population had a say? More than a quarter of the town’s inhabitants are not Swiss and therefore cannot vote. Zuber thinks they would side with Jura if they could, given the canton’s history of trying to incorporate foreigners into the political process.

“It’s obvious that they would side with us since Jura will give them the right to vote and to stand for election.”

Two centuries of the Bern/Jura issue

1815: After Napoleon’s defeat, the Congress of Vienna assigned the seven districts of the Jura region belonging to the Diocese of Basel to the Canton of Bern.

1974-1975: A series of votes were held. The Jura region was divided, the three northern districts formed the new cantonexternal link, the three southern districts remained part of Bern, and the district of Laufen joined canton Basel Country. Moutier’s population decided to remain part of the canton Bern by a margin of 70 votes.

1979: Canton Jura was officially created following a nationwide vote in Switzerland, with 82% of voters in favour.

1994: The Inter-Jura Assembly (AIJexternal link), a reconciliatory institution, was set up under the auspices of the Swiss government and the cantons of Jura and Bern.

1998: The municipality of Moutier organised an advisory vote on joining canton Jura but the idea was rejected by a margin of 41 votes.

24 November 2013: 72% of the citizens of the Jura and Bernese Jura rejected the idea of starting a process to combine the two regions into a single canton. In Moutier, those in favour of the new canton Jura won for the first time with a margin of 389 votes.

18 June 2017: Moutier will vote on whether to join the canton of Jura, possibly for the last time.

November 24 ballot Vote to reunite the Jura fails to inspire

Canton Jura was born thirty-five years after a bitter struggle that divided the people of the area, leaving half of them in the new canton and the ... 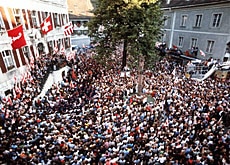 Twenty-five years ago the Swiss voted to set up a 26th canton in the Jura region, in the northwestern part of Switzerland. For many people in ...