A surge in people wanting to join the Swiss civilian service has prompted calls for a rethink on national conscription and led some politicians to go on the offensive.

Entry requirements to the civilian alternative to military service were relaxed last April. Conscientious objectors are no longer required to undergo written and oral assessments by a committee to explain their motives.

Even though the civilian alternative lasts one and a half times longer than military service, the number of applications leapt from around 1,700 in 2007, to an anticipated 7,000 in 2009.

The success of the scheme has angered the political right, particularly the populist Swiss People’s Party which says the trend has repercussions on the army. In September, parliamentarian Hans Fehr issued a formal motion to the government entitled “Stop the haemorrhage towards the civilian service”.

Defence Minister Ueli Maurer and army chief André Blattmann have also called for corrective measures. They say that, for example, it should not be possible to apply for civilian service once a person’s military service has already begun – in reference to the fact that over half of applicants have already finished their recruitment training.

The swing away from military service has also resulted in the Security Policy Committee of the House of Representatives deciding to ask cabinet to come up with an amendment bill by the summer that would once again tighten entry conditions for the civilian alternative.

The government last October ruled that a review period of the new measures had to be longer than six months to determine whether further changes were needed. But it has also commissioned a report, due in mid-2010, into the reforms and has not ruled out amendments if "all relevant factors demonstrate the need for change".

Samuel Werenfels, head of the civilian service, says before a new definition is drawn up, it is necessary to carry out a “serious analysis of the situation to shed light on the reasons so many people want to leave the army”.

He also believes that there should be debate on the general obligation to serve and on the role of the army.

"Many recruits become aware during their military service training that it does not amount to anything. They want to do something that is more meaningful," said Rahel Ruch, of the Group for Switzerland without an Army.

The People’s Party says the civilian service is just too alluring. “Because it can be done close to home and because it is more highly regarded to do something social than to serve one’s country,” said Silvia Bär, the party’s deputy secretary general.

For its part, the party wants to bring back psychological assessments of conscientious objectors. "The party has always defended the principle of a militia army, which is enshrined in the constitution. However, the removal of assessments has undermined this principle," said Bär.

According to Josef Lang, Green parliamentarian and member of the security policy committee, the likelihood of reinstating the assessments is small. And he says his party will fight any attempt to do so. “If it is somehow reintroduced, we will launch a referendum [against it] and we will win."

At an organisational level, the swell in applications is not without its problems. The number of civilian service placements, for example, will have to go up as well.

At 390 days Swiss civilian service lasts one and a half times longer than the military service and comes under the responsibility of the economics ministry.

This can be carried out in one go or in several stages, one of which has to be at least 180 days long.

The person who does civilian service works in public institutions or those recognised as being useful to the public in the health, social, environmental, humanitarian aid or development fields (including abroad).

During his service, he receives 80% of his salary, like a soldier, and a daily pay allowance.

The time and duration of the civilian service can be personally chosen, bar a few limitations. It can be carried out abroad under certain conditions.

Women can apply for admission to the civilian service once they have been begun their military service.

In Switzerland, conscription dates back to the first Swiss Constitution of 1798. But even in those days, it was opposed by some Mennonites and Anabaptists.

In 1903, the socialist Charles Naine was the first Swiss citizen to object for reasons based not on religious grounds, but for broader reasons of conscience.

In Switzerland, the foundations of the civil service were created in 1966, but legally came into force on October 1, 1996. 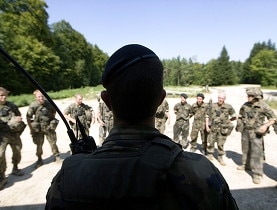 The European Court of Human Rights in Strasbourg has condemned Switzerland for discriminating against a partially disabled army conscript. The ... 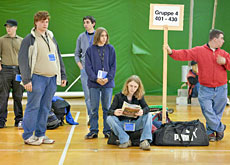 Four out of ten conscripts unfit for duty

The number of recruits dropping out of military service looks set to top 40 per cent for the second year in succession, according to the Swiss ... 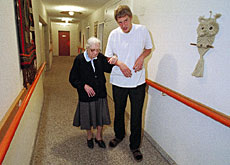 Economics Minister Doris Leuthard has described ten years of civilian service in Switzerland as a "win-win story". Speaking in Bern on Friday at ...

A rite of passage for young Swiss.