Based on the border between North and South Korea for six decades, a small unarmed Swiss military contingent might seem to be a historical afterthought, but recent events prove that the mission still has an important role to play.

This week André Blattman, head of the Swiss armed forces, will mark the sixtieth anniversary of the signing of the ceasefire agreement that ended the Korean War with a visit to the border at Panmunjom. While that truce brought about an end to the armed conflict, there is still no formal peace treaty between the two parties.

A few weeks earlier, on July 7, 1953, the Swiss government agreed to send soldiers to monitor the armistice agreement under the auspices of the newly-created Neutral Nations Supervisory Commission in Korea (NNSC).

The decision marked the beginning of the military promotion of peace by Switzerland and gave the green light to the country’s longest, ongoing military engagement abroad outside of the Swiss guards at the Vatican.

In the beginning, the Swiss contingent in Korea numbered up to 146 soldiers – today, they are just five working in tandem with five Swedish colleagues. Their mission is to monitor the mutual respect of the armistice treaty in the southern part of the demilitarised zone (DMZ), one of the regions in the world with the highest concentration of armed forces.

“Our role is very symbolic but the presence of the NNSC clearly demonstrates that the world is involved. It’s a strong signal that the armistice is still in place and valid,” the head of the Swiss mission, Major General Urs Gerber told the Korean press last month.

“The Swiss presence in the DMZ demonstrates that Switzerland is recognised as a neutral and impartial intermediary. It’s an important signal,” Maurer told swissinfo.ch. “It’s also our contribution to the efforts to stabilise the conflict on the Korean peninsula.”

Keeping the peace Man on a Korean mission

Sixty years ago, Switzerland sent a contingent of unarmed soldiers abroad for the first time. Their destination: Korea. Nearly 100 joined the very ...

Over the decades, the NNSC’s mission has been drastically reduced. North Korea has refused to recognise its existence since 1995 – to the extent that the neutral nature of the Commission been called into question. Today the NNSC it is the only authority monitoring the activities of the United Nations Command Military Armistice Commission (UNCMAC) run by the United States.

In some ways, the NNSC’s role in the DMZ is similar to that of International Committee of the Red Cross in conflict zones. It produces independent and confidential reports, work that is highly appreciated according to the government.

The NNCS publishes a weekly report of its work that it passes on to both parties in the conflict. The Swiss and Swedish soldiers carry out their mission south of the border but the barracks of the NNCS straddle it.

Every Tuesday, the head of the commission opens the north door of the barracks and waves a white paper to the North Korean soldiers before slipping the report into the letter box of the Korean People’s Army (KPA) which sits next to the abandoned box of the Chinese People’s Liberation Army (PLA).

But because North Korea no longer recognises the existence of the NNCS, the letter box is never emptied and the reports deposited inside accumulate.

“When the box gets too full, we empty it and the process begins again,” said Gerber.

Given the reticence of North Korea to even recognise the Swiss role on the border, questions have been raised as to whether the mission has a future.

For Gerber, the original aim of the mission has not changed: “I hope to see the two Koreas sign a peace treaty to replace the armistice agreement.”

Perhaps that hope is not as futile as it sounds: on July 6, for the first time in 17 years, North Korea used the premises of the NNCS to meet the South Korean authorities to discuss the future of the joint economic zone of Kaesong.

Enough, it seems, to ensure Swiss troops will stay as long as their presence is necessary and welcomed.

Flexible neutrality on the DMZ

The Neutral Nations Supervisory Commission (NNSC) was created by the armistice accord signed on July 27, 1953, in the town of Panmunjom. The armistice text ended the armed conflict but stopped short of being a peace treaty. It was signed by the armed forces present and not by the governments of the two sides.

The signatories were the Korean People’s Army (North Korea), the Chinese People’s Liberation Army and the United Nations Command. The South Korean army was not a signatory, which is why the North has never considered it as a party in the context of eventual peace negotiations.

The NNSC was stationed on each side of the border within the demilitarised zone and was made up of military personnel from Switzerland and Sweden at the bequest of the South, and of Polish and Czechoslovak troops at the bequest of the North. The four delegations carried out the mission jointly.

The criteria for neutrality were relatively flexible as it was enough to not have participated in the Korean War to be considered neutral. In the first instance, the North proposed the Soviet Union as a neutral party. After the fall of communism in Czechoslovakia in 1993, the country’s delegation was withdrawn and not replaced.

The Polish delegation, stationed on the north side of the border was asked to leave in 1994 when North Korea declared that the NNCS no longer existed. Poland no longer has a permanent presence in the demilitarised zone but remains a member of the NNSC and sends delegates several times a year to participate in activities in Panmunjom.

As tension ratchets up in the Korean peninsula, Switzerland has made it clear to the parties involved that it is ready to host talks between them, ... 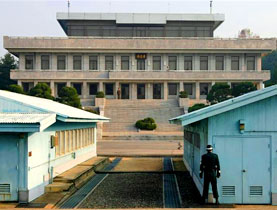 Tensions still run high, and there are 1.4 million soldiers facing each other across the border. Despite this, the local "Swiss Camp" is a ...

As in Switzerland, most farmland in North Korea is in mountainous areas. But the analogy between the two countries stops there. To feed its ...