Oil companies have begun prospecting for shale gas in Switzerland, but environmental and safety concerns could put these projects on hold permanently.

The technique for extracting this natural gas, known as hydraulic fracturing, or fracking, has come under scrutiny for causing pollution and adversely affecting water supplies.

The concerns are such that one canton, Fribourg, in April suspended all authorisations to prospect for shale gas on its territory for an undetermined period. A u-turn by the government that has left Texas-based Schuepbach Energy high and dry despite being granted an exploration permit in 2008.

The Fribourg authorities said their decision was reached because the canton prefers to focus on renewable energies rather than pursue the extraction of fossil fuels.

The Swiss aren’t the only ones with misgivings about fracking. The French national assembly voted in a law banning the technique after protests by locals and ecologists in southern France where prospection was to go ahead.

At first glance, shale gas as a source of reasonably clean energy could be a winning proposition for countries that don’t have oil resources. But studies also show that the footprint of the greenhouse gas it releases – methane – is worse than that of some more traditional fossil fuels.

And just getting it out of the ground is a complicated process requiring hydraulic fracturing.

To harvest the gas, the surrounding, compact rock must be broken. To do this, a well is dug and water combined with sand and chemical compounds is injected under very high pressure into the shale, which fractures. This frees the gas, which then travels back up the well where it is collected.

Environmentalists say though that this technique is bad for the water table that is above the shale deposits. They also claim that methane levels rise in waterways and dangerous amounts can be found in drinking water.

Around 20 to 40 per cent of the drilling water used to fracture the shale also makes it back to the surface as toxic mud.

In the United States and Canada, where shale gas extraction was pioneered, problems have been noted, but the extraction industry has so far not been officially made aware of any pollution.

For Schuepbach Energy, owned by a Swiss-American, the Fribourg decision is a blow to its ambitions.

“It’s a panic reaction,” said Werner Leu, a geological consultant working for the company. “The authorities say they want to avoid fossil fuels, but two thirds of energy needs are met by those fuels.”

“Besides, we are still at the evaluation stage and it would take a long time to get a drilling permit given the strict rules that must be followed,” he told swissinfo.ch.

Jan Mosar, a geologist at Fribourg University, calls the decision “courageous”, adding that searching for shale gas would just delay any response to our dependency on fossil fuels,

For Mosar, the risks of fracking are not to be underestimated.

“Part of the injected products filters through to other rocks, from where they can reach underground water supplies, polluting them for a long time,” he explained.

Another concern is the possibility of man-made tremors, like the ones felt in Basel in 2006 during the construction of a geothermal project.

“Underground fault lines run under many parts of canton Fribourg. If a well hits one of those faults, it could generate earthquakes,” Mosar told swissinfo.ch.

The risks remain theoretical for the time being since no wells can be dug in the prospection zone. Schuepbach, according to Leu, is still waiting for a definitive answer from the authorities and has not decided whether to pursue its activities in Switzerland and Europe.

Leu believes that the situation will eventually calm down and that it will still be possible to discuss “this future energy source”.

Jean-Marc Hensch, head of Switzerland’s gas industry association, is not a believer though. “The small size of the territory and the cost of digging the appropriate wells make fracking unlikely in Switzerland,” he told the Temps newspaper.

Leu admits that it is impossible to estimate the potential reserves of shale gas or how much it would cost to extract them since exploration is no longer possible. Switzerland’s size would not be a problem since six to eight wells can be dug at the same site.

He says pollution is not an issue either, saying that any problems so far have been due to the use of outdated or inappropriate materials.

Schuepbach has put in a request for another exploration permit, this time in canton Vaud, but not received an answer so far.

The federal authorities won’t be intervening to stop prospection either. According to Federal Environment Office spokesman Matthieu Buchs, the government is monitoring the situation, but is not planning any restrictions on exploration.

Shale gas is a form of natural gas, in fact methane.

In the United States, shale gas accounts for nearly a quarter of the country's natural gas production. This could be doubled by 2035. No shale gas is produced in Europe, but prospection is underway.

The fracking technique for shale gas extraction requires millions of litres of water that cannot be used again. The water injected into the shale contains chemicals such as benzene.

Around one third of the water makes its way via the well back to the surface, where it must be treated.

Shale can be found under much of the Swiss Plateau, which stretches from Lake Geneva to Lake Constance.

A number of firms have been examining its potential for gas extraction.

According to natural gas supplier Gaznat, the potential could be estimated to be tens of millions of cubic metres of gas. annual consumption in Switzerland is three billion cubic metres.

Switzerland will rely on domestic measures alone to cut greenhouse gas emissions by 20 per cent – if parliament endorses a decision by the Senate ...

Switzerland’s fledgling geothermal power industry needs to win back sceptics following the highly publicised failure of a project in Basel, ... 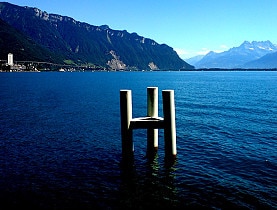 Vevey-based firm Petrosvibri has outlined plans to test-drill for natural gas deep beneath Lake Geneva opposite Montreux's Chillon Castle. The ...

Switzerland's hydropower infrastructure takes many different architectural forms. Some 60 per cent of Switzerland's energy is produced by water.

The nuclear crisis in Japan has shifted the focus to alternative forms of energy. In Switzerland, manufacturers of products for the solar and wind ...