The patriarch of the Swiss watch industry, Nicolas G. Hayek, has passed away at the age of 82. Hayek died of heart failure in his office in Biel on Monday.

Hayek was the founder and most recently the chairman of the Swatch Group, the number one manufacturer of finished watches in the world. He was often cited as the saviour of the Swiss watchmaking industry.

Considered one of Switzerland's leading entrepreneurs, he had managed to turn his vision of a strong watchmaking enterprise into reality.

"With the right personnel decisions, Mr Nicolas G. Hayek also ensured that his ideas and beliefs will live on and that continuity is guaranteed in regard of shareholders, board of directors and the group management board," the Swatch Group wrote on its website.

The self-styled 'Mr Swatch' is credited with saving the Swiss watchmaking industry with cost-saving moves in the 1980s.

Hayek, who was born in Lebanon, introduced the fun and inexpensive Swatch watch and charged a premium for top-of-the-range timepieces made in Switzerland to compete with cheaper competitors from Asia.

Until his death, Hayek had served as the chairman of the Swatch Group's board of directors. His son Nick Hayek is the chief executive of Swatch.

Swiss President Doris Leuthard praised Hayek's work on Monday evening, saying that the nation owed him a lot for his engagement and support of Switzerland as an industry location.

Jean-Claude Rennwald, vice president of the Swiss Federation of Trade Unions (SGB), described Hayek's death as a big loss for the world of watches. Rennwald is also head of the watch industry section of Unia, Switzerland's inter-professional trade union.

As Rennwald pointed out, Hayek continued to believe in Switzerland's future as a watchmaking country despite difficult economic times. Rennwald noted that while the industry cut 4,200 jobs last year, Swatch had eliminated hardly any positions.

Hayek's death was a real shock, according to Daniel Pasche, president of the Federation of the Swiss Watch Industry, especially as Hayek had remained so active in the industry. Pasche described Hayek as an extraordinary personality.

The man with the cigar and two watches per wrist was a household name in the Swiss media. In the 1990s, Hayek was a repeat critic of the Swiss National Bank and its monetary policy.

Last autumn, Hayek called for reform of the Swiss banking industry, arguing that the national economy was at risk.

Over the years Hayek was a popular interview partner. When a business was on the verge of a crisis, the media often sought Hayek's expert opinion.

Hayek also got on well with celebrities such as model Cindy Crawford and actor George Clooney, both of whom serve as ambassadors for Swatch Group brands.

Hayek was hailed as the saviour of the Swiss National Exhibition in 2002. When it looked as though the event would have to be cancelled altogether, Hayek’s feasibility report made it happen just a year later than planned.

Even outside the watch industry, Hayek was considered a visionary. One of his ideas was the Swatch-Mobil, an eco-friendly mini car. It eventually morphed into Daimler’s Smart, but by then Hayek had left the project because it no longer embodied his original concept.

However, Hayek did not give up on his vision of a green vehicle. Together with the energy firm Groupe E, Hayek launched a new project and founded a joint enterprise for renewable energy in 2007.

A year later, Hayek pursued a joint venture with the Paul Scherrer Institute; their goal was to develop a fuel cell vehicle.

The Swatch Group is the world's number one manufacturer of finished watches.

Among the group's brands are: Swatch, Omega, Tissot, Longines and Breguet.

Born in Beirut in 1928, Nicolas G. Hayek emigrated to France in 1940, and then to Switzerland nine years later. In the 1950s he led various companies, including his ailing father-in-law’s firm, which produced brake pads for trains.

In 1957 he founded Hayek Engineering, which today has offices in Zurich as well as Germany and France.

Hayek played a decisive role in reorganising and merging the ASUAG and SSIH watch groups at the beginning of the 1980s when the Swiss watch industry was in crisis.

With a group of investors he took over a majority shareholding in what is now the Swatch Group in 1985.

Over the years, Hayek has been presented with a number of prestigious academic and public awards.

He was made an officer of the Légion d'Honneur of France at the end of 2003.

In 2008 Hayek became an honorary citizen of the watch-making town of Biel and was cited as the saviour of the Swiss watch industry.

The fact that watchmaking giant Swatch outperformed its competitors last year amid a disastrous export market is no surprise, says one industry ... 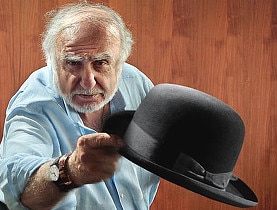 Switzerland's king of watchmaking, Nicolas G. Hayek, has called for rapid and sweeping reforms of the global financial system to allow innovation ... 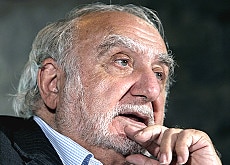 Swatch chairman Nicolas G. Hayek says Hollywood star George Clooney will sit on the board of a new company that is to develop clean energy systems ...

The first 25 years of the Swatch

More than a watch, a revolution for some. A colourful selection of pictures showing how the Swatch has provoked and at the same time created fun ...