A parliamentary decision to re-introduce a fixed book price agreement is facing a challenge at the ballot box by an alliance of centre-right and rightwing parties.

It is arguably the most controversial issue among the five decisions to come to a nationwide vote on March 11. Supporters say the agreement would boost Swiss publishers, bookshops and authors while opponents argue it would distort the book market.

“The promotion of Swiss books as a cultural good cannot be achieved with this law,” said Christian Wasserfallen, one of the driving forces behind the challenge.

The centre-right Radical Party parliamentarian argues that it is major publishing houses and publishers abroad that would benefit from fixed book prices, jeopardising the diversity of the multilingual Swiss book market with its 500 mostly small publishing houses.

Wasserfallen is calling for the dismantling of current trade structures which allow major distributors to dictate prices to editors.

“A fixed book price would cement this situation as there is no pressure to lower prices,” he said.

Consumers stand to lose out most, according to opponents of the law, which was approved by parliament last March.

Wasserfallen is convinced that an unfettered market would help boost diversity if bookshops pursue a niche strategy. However, consumer groups as well as centrist political parties are divided over the issue.

It is precisely the concern that market forces would threaten the livelihood of small bookshops and publishers which prompted a majority of parliament to draft new legislation.

There are concerned that a limited number of large distributors will dominate the market, keeping prices up and restricting the offer in retail shops.

“Books are not just a simple consumer good, they are entitled to a special legal status,” said Dominique de Buman, a centre-right Christian Democratic Party parliamentarian.

“Today’s prices are too high, which shows that books cannot be left to the forces of the free market,” explained de Buman.

Dani Landolf, director of the booksellers and publishers association, warns that price increases are inevitable when fixed prices are dropped. He cites the example of Britain, which liberalised its market in 1995.

“The result is a fight for a low prices for a few bestsellers, but price hikes for everything else,” he said.

The new law would allow the federal regulatory authority to intervene. Supporters welcome the possibility of keeping international online providers at bay, while opponents have dismissed the legal proviso as impractical and anachronistic, saying it will likely have no impact on the e-book market.

The government initially came out against the re-introduction of fixed prices but by law must represent the decision of parliament in the run-up to the nationwide vote.

Putting on a brave face, Economics Minister Johann Schneider-Ammann said: “Fixed book prices help boost the diversity of books. It is a way of promotion that does not cost the taxpayer a centime.”

He added that opinions over the impact of fixed prices were divided, and Switzerland had tried both systems over the years.

Switzerland with its German-, French- and Italian-language regions has never had a uniform book price regulation. The small Italian-language sector has always been free, while the French-language and the main German-language markets repealed their price agreements in the early 1990s and in 2007 respectively.

Neighbouring countries – Germany, Austria, France and Italy – all have fixed book prices albeit with different forms of legal agreements. And four out of five books sold in Switzerland are imported from one of these markets.

The linguistic differences in Switzerland are also reflected in the varying support for the ballot box challenge, with most signatures for the referendum coming from the German-speaking region.

About 500 publishers in Switzerland produce around 10,000 books annually in all four national languages.

The book market with an annual turnover of SFr2 billion ($2.15 billion) is the largest economic sector in the branch of culture.

An estimated 40 million copies totalling SFr1 billion are sold by Swiss bookshops every year. 80% of copies are imported.

The 2,500 authors in Switzerland publish an estimated 1,500 books annually.

Some 50 million books are available in the more than 5,000 libraries across the country.

Most countries with a significant book industry have known fixed price agreements since the 19th century.

The development of competition policy in the 1970s led to a wave of repeals of those agreements, notably in Australia, Sweden and Britain, over the next 20 years.

However, over the same period other countries, including Spain, Greece and Italy, enacted laws making fixed prices mandatory.

The aim of fixed book prices is to promote non-price competition between booksellers to support the sale of little-known, difficult or otherwise culturally interesting books rather than catering only to blockbuster readers.

Swiss booksellers and publishers are currently facing tough times, prompted by the economic crisis, online and discounter competition and e-books. 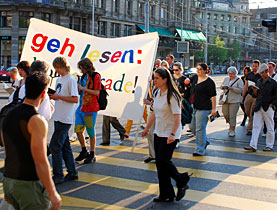 The book is alive and kicking despite competition from the television and the internet, say the organisers of events in Switzerland to mark World ...

The Swiss cabinet has rejected calls to maintain the net book agreement (NBA) in Swiss-German regions, which allows publishers to fix the price of ...

Award-winning book celebrates 100 years of the Pro Natura conservation society. Swiss books are often among the most beautiful around. The ...

The works of a 20th century master.

Delving into the secrets of century-old books St Gallen abbey was dissolved in 1805 and has since become a Unesco world heritage site. The ...