A Swiss expert says changes in global agricultural policy are needed to prevent famine and poverty amid fears of social unrest over rising food prices.

An international study, published on Tuesday, shows that efforts to increase food production come at the expense on the world's poor and damage the environment.

"We can't go on as we are," said Hans Rudolf Herren, head of the Swiss non-governmental organisation BioVision, which promotes sustainable agriculture in developing countries.

Along with Kenyan colleague Judi Wakhungu, Herren chaired a panel of 400 researchers and experts worldwide who conducted a four-year study on the impact of agriculture, its risks and opportunities.

The study was carried out on behalf of the International Assessment of Agricultural Science and Technology for Development (IAASTD), which is sponsored by relevant United Nations bodies and the World Bank.

"The report concludes that basically we have a lot of knowledge to find a sustainable solution to the problems of hunger and poverty," said Herren.

"But the bad news is that at present agricultural production comes at the expense of people and the environment and creates a number of ecological and social problems."

The report combines perspectives of developing and developed countries, and takes a "bottom-up" approach to understand the needs of the most vulnerable sectors of the world community.

Herren pointed out that the problem is not with production, but with distribution. What small farmers need is better access to the means of production, and information about the latest agricultural research.

"Pushing up productivity is not the solution. Higher productivity requires much more energy and money," he explained.

Speaking on Swiss public radio, he said that many industrial agricultural methods, such as the use of energy-intensive chemical fertilisers, are not in the long run sustainable. Instead, it is important to teach farmers practices which enrich the soil.

Sustainability is the key to ensuring food supplies in the long term, according to Herren.

To help protect maize crops from the stalk borer insect pest and the striga weed, beans are planted between the rows of maize. They are the "push" factor: their scent drives away the insects and they destroy the striga, which enriching the soil with nitrates.

The "pull" is the sticky Napier grass planted around the field which attracts and traps the stem borers.

Herren does not rule out the use of genetically modified crops, but believes they are "only a small part of the solution".

"The agro-chemical industry wants better seeds. But if we don't improve the soils and cultivation methods, the best seeds are useless," he said.

As agriculture has ecological and social aspects, a multifunctional approach is needed, which recognises and rewards the contribution of farmers to the ecosystems.

"Exactly how and where is for politicians to decide," he added.

The non-governmental group Swissaid has placed part of the responsibility for the current food crisis on the policies of the World Bank and International Monetary Fund.

It said developing countries had been forced to cut back subsidies to farmers producing staple crops and to focus on cash crops for export instead.

Swissaid expressed concern at the abolition of customs barriers which had opened the way to cheap imports and undermined local production.

"Agricultural and economic policy at every level should focus on the principle of food sovereignty, aimed at providing food for the population, not at earning foreign currency," a statement said.

The policy of neglecting small farmers in favour of large plantations must be turned around if the current crisis is to be overcome, the organisation warns.

In the year since 2007 wheat prices have gone up by 130%, soybeans by 87% and corn by 31%, according to Bloomberg.
The UN Food and Agricultural Organization says rice has gone up by 70% in the past year.
Some countries - including India, China, Vietnam and Egypt - have banned the export of rice.
1,000 – 2,000 litres of water is needed to produce 1kg of wheat
10,000 – 13,000 litres of water is needed to produce 1kg of beef.
The world population has grown from 2.5 billion in 1950 to 6.1 billion in 2000 and is projected to reach 9.2 billion by 2050.
There have been food riots and protests in Burkina Faso, Cameroon, Egypt, Ethiopia, Haiti, Indonesia, Ivory Coast, Niger and the Philippines.

The IAASTD report is sponsored by the World Bank, the FAO and the WHO.

Input came from across the spectrum of interests, from the UN and governments, through representatives of farmers, consumers and NGOs, to specialists from the food industry and agribusiness.

The report has been compared with a study by the Intergovernmental Panel on Climate Change (IPCC).

So far 60 governments have approved the IAASTD report, while the US, Australia and Canada have expressed reservations.

Switzerland has not yet officially responded.

Founded in 1998 by Hans Rudolf Herren, Zurich-based BioVision is a non-profit and independent Swiss foundation for sustainable development.

BioVision favours scientifically founded methods for the sustainable improvement of living conditions in East Africa, as well as in the fight against poverty.

Founder Hans Rudolf Herren was awarded the World Food Prize in 1995 for his work on biological pest control; this award funded the establishment of BioVision. 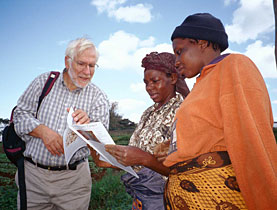 Swiss non-governmental organisation BioVision is continuing to help farmers in Kenya, despite the challenges posed by the unrest in the country ... 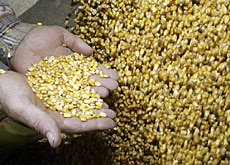 The United Nations Special Rapporteur on the Right to Food is demanding an international five-year ban on producing biofuels to combat soaring ... 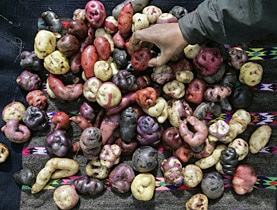 Potato promoted as food staple of the future

The United Nations has declared 2008 the year of the potato to highlight the significance of the tuber for food security for future generations. ...