The House of Representatives has voted against banning burkas worn by Muslim women from public spaces in Switzerland, sounding the death knell for an initiative put forward by the canton of Aargau several years ago.

Following a March Senate vote with the same result, the house decided by 93 votes to 87 that the initiative would not go through.

Speaking for the majority, centre-right Radical Party parliamentarian Hugues Hiltpold said banning the burka would be excessive and would encourage tourists from Muslim countries to have negative opinions of the country.

“Today in Switzerland, wearing this type of clothing for religious reasons doesn’t pose any problems in daily life and is a rare practice in the Swiss Muslim community,” Hiltpold added.

“Banning the niqab or the burka in Switzerland would have adverse consequences for Swiss Muslims.”

Those supporting the initiative argued that a ban would encourage equality between men and women and would strengthen security.

The Senate also left it up to individual cantons to decide whether to take security measures against protesters who conceal their faces.

Traditional body coverings have their origins across the Muslim world. The burka and niqab, frequently worn in Afghan regions, cover all but the wearer’s eyes, while the hijab is a scarf worn only over the head. The tschador, traditionally Iranian in origin, covers the entire body except the face.

Muslim traditions in Switzerland have been a hot topic since the country voted to ban the construction of new minarets in November 2009. Neighbouring France has continued to wrestle with the issue of headscarf bans, a debate sparked by a 2004 law against religious symbols in schools.

The Muslim community in Switzerland accounts for about 4.5 per cent of the population.
Most Muslim immigrants came from the former Yugoslavia and Turkey. The community includes up to 100 nationalities.

There are about 200 mosques and prayer houses in Switzerland, but only four have a minaret. On November 29, 2009, 57 per cent of voters supported a people’s initiative to ban the construction of new minarets in Switzerland. This was in the wake of heated debates and legal battles at a local level about requests by mosques to build more minarets.

After minarets, Swiss target the burka

Six months after Switzerland banned the construction of minarets, parliamentarians in canton Aargau want to see a nationwide ban on Islamic ... 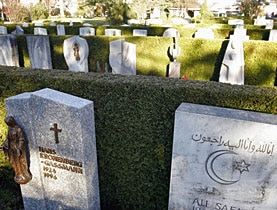 The rightwing Swiss People's Party is planning further steps against the spread of Islam in Switzerland following voters' approval of a ban on new ...

Switzerland is promoting dialogue with the Muslim world as it comes to terms with the electorate’s decision six months ago to ban the construction ...

A Muslim basketball player is set to challenge a decision by Swiss sport authorities requiring her to either remove her headscarf or stop competing.

Welcome to our home!