Police in the Swiss capital, Bern, have clashed with leftwing activists ignoring a ban on public demonstration ahead of Sunday’s parliamentary elections.

Security forces initially stopped a group of about 100 marchers in the city centre, police said. But running battles continued for several hours in the streets across the city busy with weekend shoppers and onlookers, local media reported.

Police fired rubber bullets at militants and detained more than a hundred people for questioning.

The activists said they wanted to protest against a continuing rightwing tendency, notably in asylum policy.

The massive deployment of local police in riot gear and with water cannon, boosted by forces from other regions of the country, was criticised by leftwing politicians.

It is the third time in a week that leftwing militants are involved in skirmishes with police.

In 2007, militants and supporters of the conservative right People’s Party clashed in a major pre-election rally in Bern, prompting a political outcry.

Leftwing groups regularly organised protest marches in the streets of Bern until 2010.

Authorities in the capital Bern have “severely condemned” attacks against police and damage to property in clashes during an unauthorised and ... 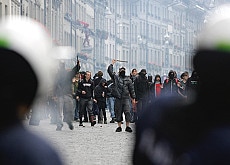 Police in the capital, Bern, have clashed with leftwing militants who tried to interrupt a planned election rally by the rightwing Swiss People's ...