The Scuol Palace, where Lower Engadine spa tourism originated 150 years ago, has been run by Abraham Friedman and his wife Zipora for around three years.

The wings of the building, which rises like a yellow colossus from the surrounding pines and larches, act like a giant protective wall, protecting the river and its countless springs.

The street leading to the 120-room hotel is filled with men with sidelocks, long beards and skullcaps, wearing black coats and rucksacks. They have hiking sticks and are focused on the hiking path.

The beer taps beloved of previous tourist groups have run dry and been replaced by tea, coffee and cake.

In the mahogany dining hall large orthodox families and young couples eat kosher pies from France – Switzerland has banned the practice of cutting an animal's throat so that it bleeds to death (kashrut, or Jewish dietary law, prohibits the slaughter of an unconscious animal).

A guest in a ski jacket is checking his emails; in the synagogue some men are swaying backwards and forwards in prayer; a sign on the door of the swimming pool displays the separate times for men and women – and the glass walls are draped with protective foil.

Some of the more revealing stucco decorations on the walls have also been covered.

What attracts Jewish guests, especially from Israel and the United States, to this remote valley?

"For Israeli holiday makers Switzerland is a status symbol," said Shoshana, the owners' 30-year-old daughter, who helps out in reception.

She added that Israelis appreciate the many possibilities for hiking or going on a trip, in addition to the pleasant temperatures in summer.

Jewish tourists also come to the Scuol Palace because it has the infrastructure that lets them enjoy their holiday without having to neglect their religious duties: there are three synagogues, a library and a mikvah, a ritual bath.

"It's practical to stay here because we can eat kosher without having to live off salad, fruit and tinned food," said one Israeli ski tourist.

A supervisor is employed in the kitchens to ensure that the food is indeed kosher. Under dietary law, this includes turning the ovens on and off for the non-Jewish staff.

The mashgiach, as he is called, also cracks open eggs to make sure there is no blood inside and checks that the correct utensils are being used.

Red and blue markers divide the kitchen into "meat" and "milk" areas. Plates, spoons and pans are also colour coded.

"At first it was a bit of a hassle. You'd suddenly realise you were using the wrong bowl," said one apprentice, preparing matzos with a headscarf-wearing confectionist from Israel. Matzo is the substitute for bread during Pessach – Passover – when eating chametz – bread and leavened products – is forbidden.

So that bread, chocolate and coconut macaroons don't come into contact with acidic foods, the work surfaces are covered in plastic and aluminium foil.

Fifteen minutes away in the village, in addition to positive comments about the Jewish guests one can also hear "I'm not racist but..." generalisations.

"I have nothing against these people, but they should conform a bit more," said one bus driver, adding that the men don't greet you, often go around in groups, occupy the nicest spots and leave rubbish behind.

"You can't really say that these guests bring anything to the region financially," said the owner of a souvenir shop, adding that the orthodox Jews seal themselves off in the Scuol Palace.

But for Abraham Friedman, a former Israeli officer, "it's not a question of anti-semitism".

Having organised an open day at the hotel so the residents of Scuol could learn about Jewish culture, Friedman now wants to compile some guidelines for his guests.

"The tensions in the village have eased," admitted Jon Domenic Parolini, president of Scuol's 2,300-inhabitant community. "People have got used to the fact that the Jewish guests are not big on communicating with the region."

Parolini said it was important that the historical heart of the unique hotel be retained – an accomplishment that was being questioned by villagers.

However, he welcomed Friedman's intention to remind the guests that they are not on the moon and that other people live in the area.

"This is just the beginning," said Shoshana Friedman. "We're also breaking into the Jewish markets in Germany, France, Britain, the United States and Canada."

The plastering on the façade might be peeling and there are spots of mould on a few ceilings, but the Friedmans have plans to expand.

After the renowned Engadine thermal baths at Scuol refused to allocate swimming times exclusively for Jews, the hotel now wants to open its own thermal baths.

The establishment of the State of Israel is closely linked with Switzerland: the First Zionist Congress was held in Basel in 1897.

In addition 15 other congresses out of a total of 22 were also held in Switzerland.

Before the establishment of Israel, Switzerland maintained a consulate in Jerusalem (accredited to the British mandate) and a consular agency in Tel Aviv.

Switzerland recognised the new state in 1949 and opened a consulate in Tel Aviv. This consulate was upgraded to an embassy in 1958.

The Swiss community in Israel comprises around 12,000 people.

Israel is one of Switzerland's most important export markets in the Middle East.

Nearly 43% of Jews resident in Switzerland were born abroad. Just under 79% of them have Swiss nationality.

About 30% of Jews with a Swiss passport live in Israel. 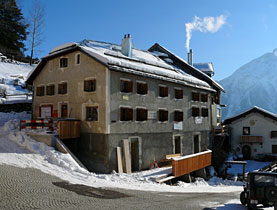 The mountain community of Vnà in southeastern Switzerland has officially become the country's first living hotel village. The aim is to ensure ... 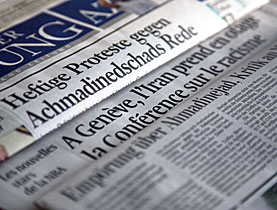 The Swiss press has condemned anti-Israel comments by Iran's president at a meeting in Geneva, while showing little patience with Switzerland's ... 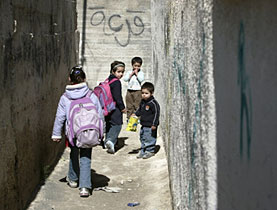 Dismayed at the impact of occupation, a group of Jewish activists has launched a global appeal calling on Israel to uphold and respect human rights.