The tenth International Boogie Woogie Festival in Switzerland has come to an energetic close among the piazzas and palm trees of Lugano.

Highlights this year included an octogenarian legend smacking the keys with his shoe and master classes on not only how to play “fast blues” but also how to dance along.

“The players here are like a big boogie woogie family,” Silvan Zingg, one of the top boogie pianists in the world and the event’s organiser, told swissinfo.ch (listen to audio "Boogie night" for extended interview).

“I was being invited to other festivals and the other players asked why I didn’t organise a festival in Lugano – and I thought, why not? We have a lot of festivals here but none is dedicated to blues or boogie woogie. So in 2002 I invited some friends to a smaller hall – we filled it up and it’s got more and more successful every year.”

This year Zingg managed to sell out the 1,130-seater Palazzo dei Congressi.

One can understand why other members of the “family” – including German maestro Axel Zwingenberger, who has his own festival in Hamburg – were keen on spending a weekend in Lugano.

Nestled on a sparkling lake in the southern canton of Ticino, Italian-speaking Lugano is arguably Switzerland’s most chic city. People come from all over the world – and from Milan, just an hour away – to shop in the cobbled alleys groaning with designer stores, to fill up on pasta and tiramisu in one of many piazzas, or simply to see and be seen.

Back inside the Palazzo dei Congressi, Zingg, who studied classical music for six years, is giving a talk on the history of boogie woogie ahead of the main concert.

Sitting at one of two grand pianos on stage, he charts with the help of a slideshow the development of boogie woogie from the barrel houses of Texas at the beginning of the 20th century, where workers from Africa would unwind after toiling on the railroads, to the “juke joints” of Chicago.

“Basically rock’n’roll is nothing more than boogie woogie that changed its name for white people to sell even more records.”

He explains the various boogie bass lines and plays classics such as Pine Top’s Boogie Woogie, The Fives and Sixth Avenue Express.

Zingg proudly claims that one of his own compositions, “Dancin’ the Boogieexternal link”, is the most watched boogie clip on YouTube, with more than three million hits.

“The first [boogie] revival was in the 1970s in Europe when piano players from the Netherlands, Germany and also from Switzerland started to play again this type of music, which had been slightly forgotten. Now we’re having a new revival – even on the radio you can hear a lot of boogie woogie.”

This year’s line-up was noticeably Europe-centric (see box). Was that because of logistics or because Europe is a hotbed of boogie woogie?

“The plane tickets are cheaper!” Zingg joked. “Actually Little Willie Littlefield lives in the Netherlands so even American players move here because there’s more of this style going on. But even in the US there’s a revival of this and some younger players are coming out.”

Little Willie Littlefield, a Texan boogie legend who incredibly had his first hit, “Little Willie’s Boogie”, in 1949, certainly left his mark on the festival.

The frail old man who needed help to reach the piano exploded into life as soon as he touched the ivories. Grunting, grinning and growling through old-school classics, he proceeded to take off one of his shoes and bash it – in perfect rhythm – on the SFr170,000 ($195,000) Bösendorfer grand.

The youngest guest was Lasse Jensen, a 20-year-old Dane who discovered Jerry Lee Lewis when he was six but then said he had a “revelation” when he was 15 when he heard Albert Ammons playing boogie woogie (see link).

“We’re all self-taught, but festivals like this are a great way to meet other pianists and listen to them and then incorporate that into your own playing,” he told swissinfo.ch.

Jensen, who kept his shoes on, had already played at festivals in the Netherlands and France but this was his debut at Lugano – a festival he described as “exquisite”.

“To come here it’s indescribable. Four years ago I sent Silvan some video clips asking whether one day I could be invited to his festival, and he wrote back saying ‘well, you’re going to need a lot of improvement’. Ever since then I’ve been working hard and now, four years later, I can’t believe I’m here!”

As for the future, Zingg said he wanted his festival to go from strength to strength and part of that was supporting up-and-coming talent.

“I’m lucky to have already been able to play in 30 countries, and I wish the same good luck to the young players who I invite to my festival.”

When asked what he loved so much about boogie woogie, Zingg struggled to put his muscular finger on it.

“I can’t explain it! It’s my life! The rhythm, the foot tapping – the most beautiful thing is to see people happy. I love classical music, but when I go to a classical concert sometimes the audience is almost asleep! At my concert no one sleeps – they laugh – and that’s nice to see. When people leave the concert, everyone has a smile on their face.”

Two smiling members of the audience were Loraine and Charles Lawrence, who had travelled to Switzerland for the first time from Britain.

swissinfo.ch wondered whether they had come because they loved boogie woogie or because they were trying to get away from the royal wedding, which was taking place the same weekend. “No, no – we love boogie woogie! And my husband plays it,” Loraine said.

“It just makes you want to get up and dance – it fills you with joy and makes you glad to be alive!”

Silvan Zingg was born in Lugano in 1973 and is known as the “Boogie Woogie Ambassador”.

He was born into a musical family and before he started school, he had learned to play the piano and was particularly inspired by the work of Afro-American blues pianists.

After studies as a graphic designer, he decided to become a professional musician. He has performed more than 1,000 concerts in 30 countries:

In 2005 he performed with Chuck Berry in a sold-out concert in Zurich. Zingg has played with other blues artists such as Ray Charles, Memphis Slim, Sammy Price, Champion Jack Dupree, Katie Webster, Michel Petrucciani and Jimmy Walker.

Zingg has recorded various CDs and DVDs playing solo and with his trio.

In 2010 he was invited to give a concert and lecture about the history of boogie woogie at the University of Texas. 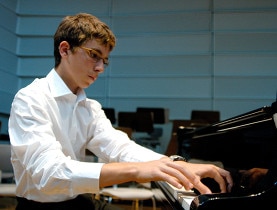 "I need to get my energy out somehow!"

Despite being outwitted by an online pirate, the organisers of the 45th Montreux Jazz Festival were all smiles at this week's launch of the ...

By Bernard Lechot in Zermatt

Unique live concert footage spanning the entire 44-year history of the Montreux Jazz Festival has been saved for future generations under a new ...

By Simon Bradley in Caux

Hitting all the right notes