Egyptian billionaire Samih Sawiris wants to team up with a Swedish company to link and upgrade Switzerland’s Andermatt and Sedrun ski resorts.

A letter of intent published on Wednesday shows that Andermatt Swiss Alps – a subsidiary of Sawiris’ Orascom Development – is joining forces with SkiStar. Together they plan to invest SFr140.8 million ($159.8 million) in the project.

“The development is conditional on agreements being reached with existing shareholders, creditors and the respective cantons of Graubünden (Sedrun) and Uri (Andermatt), as well as the federal government, with regards to contributions supporting the planned investments,” according to the statement released by Andermatt Swiss Alps.

Yet critics are already getting uneasy, citing concerns about the potential environmental impact as well as the possibility that the new infrastructure might grossly exceed the demand.

Work is currently underway as part of the Orascom project designed to convert the quiet central Swiss village into an upmarket and bustling resort.

On top of that there will be 35,000 square metres of commercial property, including a golf course. All that seems to be missing is the appropriate infrastructure for skiing.

“Today, the infrastructure in Andermatt is not very comfortable. If we want to attract new guests to Andermatt, we have to be up-to-date. From that point of view, we really have to take steps forward,” Andermatt Swiss Alps Manager Gérard Jenni told swissinfo.ch.

“This is why we’ve teamed up SkiStar, which is very experienced in developing ski areas.”

The two entities will share expenses as well as know-how. SkiStar runs five ski resorts in Sweden and Norway.

The basic idea is to modernise the existing infrastructure while linking the Andermatt ski area with that of Sedrun. More specifically, the plans include the construction of 18 ski lifts and cable cars as well as snow cannons, restaurants and other facilities.

“I don’t agree with expanding the ski area ahead of time. Rather we should invest in stages, in keeping with the demand,” said Franz Steinegger, the president of the Andermatt Gotthard ski lift company.

In an interview with the SonntagsZeitung newspaper on Sunday, Steinegger said he feared that a rash investment in ski facilities could create a deficit that the public coffers would have to absorb.

On the day after the partnership with SkiStar was announced, Sawiris told the Neue Luzerner Zeitung: “I don’t know who invented this ‘all-at-once’ scenario” – noting that building at such a pace would be neither technically nor financially feasible. He added that the area would not be able to cope with such fast development, anyway.

This week there was a meeting in Zurich between Andermatt Swiss Alps, SkiStar and the local ski lift companies. According to Sawiris, they discussed priorities as well as the stages of construction.

“To me, two important priorities are snow cannons as well as the connection from Nätschen to Hotel Chedi (the grand hotel currently under construction in Andermatt),” Sawiris said.

Like Steinegger, the Swiss Alpine Club is also sceptical about the plans announced by Andermatt Swiss Alps and SkiStar – in particular the intense development proposed between Andermatt and Sedrun.

“The impact on the landscape would be too strong. These southern slopes are almost untouched and very attractive both for ski touring as well as for climbing,” said Thomas Gurtner, the head of the Swiss Alpine Club’s environmental department.

He told swissinfo.ch, “We understand that they want to have a link between the two ski resorts, but we ask that they find softer solutions which are based on the existing railway.” He said that one or two new ski lifts would be reasonable, but not the ten to 12 that the plans call for.

Gurtner added that in addition, his club did not see the need for a second cable car from Hospental to Gemsstock, considering that the existing cable car reaches Gemsstock from Andermatt.

"The valuable landscape with the St Anna glacier has to remain as it is," he said.

However, he did speak up in favour of plans to build a new cable car from Göschenen to Nätschen-Gütsch: “That’s a good project – it’s a promotion of public transport, actually, so we support that 100 per cent.”

Jenni of Andermatt Swiss Alps remains unperturbed by the concerns that have been voiced: “Everybody is invited to give their opinion until May 26, so we will have the full picture by the end of this month. Then we can adapt the ski infrastructure plans after that.”

The Sawiris business empire, the Orascom Group, is divided into three sectors: telecommunications, construction and tourism.

The company's strategy is "the acquisition of undeveloped land in prime locations, the development and marketing of fully self-sufficient communities..."

The flagship El Gouna resort is a cluster of hotels, restaurants and shopping centres built around artificial lagoons.

Orascom administers the resort with a resident population of 10,000, including its airport, schools and hospital.

The sleepy village of Andermatt will become a “better place” once it’s been transformed into Switzerland’s newest alpine resort, its billionaire ...

By Jessica Dacey in Andermatt

The Swiss have just set two world records: they have built the longest rail tunnel, and above it they have erected the highest lighthouse. A ...

By Julia Slater on the Oberalp Pass 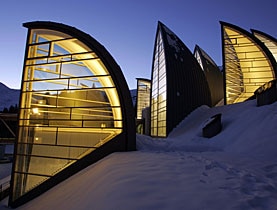 Designing the future of alpine tourism

Tourism schemes of all shapes and sizes are being dreamed up to lure visitors to the Swiss Alps. The designs range from a lowly, authentic ...

The village of Wassen in canton Uri has a landmark you cannot ignore. Despite the Alps towering above it, the baroque church dating from the ...

In 2013 an exclusive golf and ski resort will open in the alpine village of Andermatt, near the Gotthard tunnel. Well-to-do buyers have been ...