It’s astonishing that the Swiss can understand each other. Not only do they have four languages, but well over half of them speak one way and write another.

Switzerland is at the intersection of three major European cultures – German, French and Italian – and the only language it can truly call its own, Romansh, is spoken by less than 0.5 per cent of the population.

German-speaking Swiss, about two thirds of the population, have a plethora of different dialects, which are mutually understandable, but each with strong local colour.

The 35,000 speakers of Romansh are divided between five “idioms”, each with its own dialects. In some parts of Ticino there is a difference from one village to the next.

Language is a topic of endless fascination to the Swiss. Swiss German radio has a popular programme, Schnabelweid, where listeners can ask about the meaning and origins of words.

“Da Num e da Pum” in Romansh explores the derivations of names, and Italian language Swiss radio often talks about the dialects of Ticino and the neighboring areas of Italy in its “La domenica popolare” programme. “Intré-No” on the private Radio Fribourg is a weekly programme in patois.

A new exhibition at the National Library in Bern called Sapperlot! takes a closer look at the language landscape of Switzerland. It draws on the rich phonogram archive held at Zurich University, on the archives of the scholarly dictionaries of the four Swiss languages, and on the written holdings of the National Library itself.

“Half the audios are historic, and the other half are contemporary... We wanted to present a colourful potpourri,” co-curator Peter Erismann explained to swissinfo.ch.

From lake to lake

Laid out on the floor of the room housing the exhibition is a plain carpet with the Swiss lakes cut out of it, so visitors can orientate themselves.

Go and stand by Lake Zurich, and coming out of what looks like a low-hanging ceiling lamp, you can hear examples of local dialects.

These range from a woman describing the butchering of a pig in the 1950s, to young people discussing the 2009 “youth word of the year”: sbeschtwosjehetsgits, which means literally “the best there’s ever been”, or “fantastic”. It’s ungrammatical, an example of the “Yugoslang” popular with Swiss youth as a parody of the way young Balkan immigrants are said to speak.

Move a little bit west, and stand in canton Aargau, and you can hear horse traders – recorded in 1961 - speaking the now extinct Surbtal dialect of Yiddish, which developed in the two small villages to which Switzerland’s tiny Jewish community was once confined, or listen to Energy Minister Doris Leuthard speaking in her native dialect about the future of nuclear power in 2011.

Find Lake Lugano in the south, and you can hear examples of Ticinese dialect, including the oldest recording in the exhibition, dating back to 1913, the parable of the prodigal son, or the recent 2011 version of “Some Like it Hot”, with the Marilyn Monroe character straight out of a remote Ticinese village.

Between them the 13 audio stations contain about 40 examples of Swiss dialects from all over the country, stretching over nearly a century, consisting of readings, recollections, discussions and exhortations spoken by peasants, poets and politicians.

If the 1913 example is rather scratchy, it is not surprising: the exhibition also features examples of recording equipment through the ages. The very earliest had a funnel-shaped trumpet into which the subject spoke, and the sound was recorded by a needle cutting into a wax disc.

Those ancient machines were too cumbersome to go to the speaker, so the speaker had to come to the machine. But that did not stop scholars collecting from all over Switzerland.

“Although the phonogram archive is based in Zurich, the focus has always been country-wide,” said the exhibition’s second curator, Michael Schwarzenbach. “It was a strictly scholarly exercise to collect dialects, once sound recording became possible. That’s the only way you can really document a language.”

But interest in dialect predates the invention of the phonograph, even if the words could only be noted phonetically at that time. Not surprisingly, it was the national dictionary of the German dialects which was the first to be launched, back in 1862.

“In the 19th century the German influence was fairly strong, and there was a feeling that this living tradition should be preserved,” Erismann explained.

On show are examples of boxes filled with the slips on which the field researchers noted in considerable detail the words they collected.

“If you go to the editorial offices of the dictionaries you can see whole rooms full of these boxes, which are the basis on which the volumes are compiled,” said Erismann.

“The dialects in Switzerland are a major part of the identity of the inhabitants of this country,” said Erismann.

“As far as German speakers are concerned, they have two different forms of expression: the spoken language on the one hand, and the written on the other. I think that is a real piece of luck. It would be wrong to retreat into dialect. We need to stay open-minded and cherish both forms.”

Schwarzenbach, who comes from Italian-speaking Lugano, regrets that dialects are much weaker in Ticino. “But people are very interested. The Vocabulario [the Italian dialect dictionary] is very popular,” he said.

Dialect is not dead, and nor is dialect research. Visitors to the exhibition, and also people at home, can make their own contribution to it. An interactive station, which is online too, invites them to record specific examples of their own spoken language which will be analysed by language experts. [see links in sidebar]

Although it is still early days, the results are ear-opening!

The Sapperlot! exhibition runs until August 25.

It is open from Monday to Saturday during library hours.

There is an accompanying programme consisting of evening lectures and discussions.

Detailed scholarly dictionaries are being compiled of all four Swiss languages:

Since the work is so slow, they are published in booklet form, which are then bound together to form volumes.

The Idiotikon, was first proposed in 1862 and its first volume was published in 1881. It has now reached the letter Z. It is due to be completed in 2022.

The VSI was launched in 1907; it has reached the letter C.

A toned-down swear word, it is now a somewhat archaic and light-hearted exclamation of surprise, admiration, annoyance etc.

It derives from the word for sacrament in the four languages.

Identity at stake in war of words

The vexed question of language is back in the news as voters in canton Zurich accepted an initiative to make Swiss German the language of the ...

French is today Switzerland’s second language, but until about 200 years ago most people in western Switzerland spoke something quite different. ... 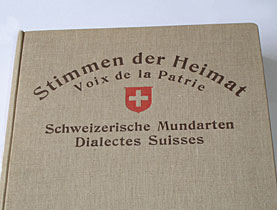 Listening to the voices of the past

When Thomas Alva Edison first succeeded in capturing the human voice on a phonograph, the ability to record speech opened up a brave new world for ...

How the Swiss watch their language

A book entitled The Swiss Idiotikon - which is still not finished after nearly 150 years - might seem like a foolish enterprise. But despite its ...

An ancient dialect is experiencing a renaissance in the canton of Valais. Patois, once principally spoken among farmers, used to be considered ...