Zurich’s Kunsthaus was bound to rock the art establishment when it invited the notorious Nahmad dealers to exhibit. The museum’s director stands by his decision.

Kunsthaus director Christoph Becker is convinced that the quality of the works on show in “Miró, Monet, Matisse – The Nahmad Collection” will dispel any thoughts that a world-class art institution is catering to the commercial interests of a family who happen to deal art on a global scale.

The Nahmads have been dealing in art for five decades, ever since the three sons of a Sephardic banker from Syria left Beirut for Milan, then Paris, New York, London and Monaco, to escape the tensions in the Middle East.

The latest exhibition at Zurich’s fine arts museum is a direct consequence of its centenary celebration in 2010, when it revived the 1953 Picasso retrospective. Because the Nahmads had loaned key paintings, Becker “suspected” that they possessed many more and hoped that they could be convinced to show them.

“When I first approached the Nahmads, they said that they did not believe that they had a collection. I told them to think about it,” Becker told swissinfo.ch. Two weeks later and following many internal discussions, the publicity-shy family acquiesced and agreed to produce a core selection of 150 pieces, later reduced to a hundred.

“The selection met the highest museum standards. If it had not, I would have cancelled the show,” Becker said. Furthermore, he discovered what he qualifies as a “Nahmad taste”, with the prominence of some artists and the exclusion of others.

“Miró, Monet, Matisse – The Nahmad Collection” focuses on the five artistic periods between 1870 and 1970 favoured by the Nahmads, including Impressionism, Fauvism, Cubism and Abstraction, Surrealism, and Picasso.

Visitors at the opening commented on the odd hanging, as if they were invited to discover crucial developments in art history, rather than the paintings themselves. A row of seven Modiglianis from the artist’s period of greatest artistic intensity in the years before his death in 1920 are lined up like models all sitting in the same chair facing the same window (they probably were).

Picasso’s colourfully riotous interpretations of Manet’s “Déjeuner sur l’herbe” or Delacroix’s “Les Femmes d’Alger”, all splashed on a single wall, prove to us that, yes, there can sometimes be too much of a good thing.

Becker wants us to understand that a collection “must be regarded as existing in a state of becoming”. What he is celebrating is the commitment of a group of individuals to art.

However, unlike the legendary art merchants who would discover and sustain artists, the Nahmads respond to auction barometers.

Depending on the source, the Nahmads are said to have accumulated between 3,000 and 5,000 works of art - including more than 200 Picassos, a collection that is second only to that of the Picasso estate.

Most of the works are squirrelled away in a secure duty-free warehouse near Geneva airport. Even the Nahmads had never seen them displayed together before the Zurich exhibition.

But it is not so much a collection, the art world says, as a stockpiling of works by specific artists in order to corner markets and influence prices. Hardly an art auction takes place in premier auction houses today without the Nahmad family either selling or buying.

With a fortune estimated by Forbes at more than $3 billion - also amassed from currency and commodity trading – they have the financial clout to invest, possess, squeeze or drive markets. Occasionally, they hold on to their goods.

“It’s the world upside down,” said Sami Kinge, who went to school in Beirut with David Nahmad. Contacted in Paris, where he runs an eponymous gallery that deals directly with artists, he said laconically: “The Nahmads only buy and sell.”

Becker admitted that the exhibition, even before it opened, had caused a stir. Accused of becoming an ally to the most influential art dealers in the world, he insisted that his aim is only “to bring something into being”. There was no deal, he emphasised.

He added that the value of the works presented was “above money” and that the exhibition would therefore not influence auction prices any more. “With works of this quality, it’s impossible. If we thought we were turning the screw, we wouldn’t have done it.”

Urs Lanter, Director of the Swiss Art Department at auction house Sotheby’s concurred. “Exceptional works command exceptional prices,” he said, “especially when they enjoy great provenance and when they are important in the art history and the career of the artist”.

Simon de Pury rejected the suggestion that the Kunsthaus could become the backdoor of auction houses. The head of Phillips de Pury & Company said that some of the greatest art collections in the world are the creation of art dealers. He gave the examples of Ernst Beyeler and Heinz Berggruen who built museums to house their collections, respectively in Switzerland and Germany.

Joe (Giuseppi), the elder and more flamboyant of the three Nahmad brothers, started his collection by commissioning paintings by Lucio Fontana and Wilfredo Lam in the lively Milan of the sixties. Almost 80, he now lives the life of a recluse.

His younger brothers, Ezra (1945) and David (1947) engineered their first business deals while still at school and invested in the stock market at the age of 15. They became interested in art through Joe.

For his first art transactions, David would lend a buyer the money to buy the work of art he was selling, then use the debt as collateral to obtain a loan from the bank.

Ezra’s son, Helly, opened the Helly Nahmad Gallery in London in 1998. He attended the Courtauld Institute of Art in London and has played a pivotal role in the organisation of the Zurich exhibition.

David’s son, also named Helly after the grandfather, opened the Helly Nahmad Gallery in New York in 2004. He is often pictured with celebrities.

Picasso’s “Petit Pierrot aux fleurs” (Harlequin with Flowers), a portrait of his son painted in 1923/24, is considered one of the highlights of the show.

The Kunsthaus Zurich averages 300,000 visitors a year, with records between 2,000 and 3,000 daily visitors for the major exhibitions, including the recent Picasso retrospective.

A sale of works that belonged to the late Swiss art dealer Ernst Beyeler, which include Picassos and a huge Monet, could fetch more than $50 ...

Geneva is all a Go-Go as Gagosian opens gallery

The Geneva art world is buzzing after the recent opening of a new venture by Larry Gagosian, arguably the world’s most successful contemporary art ... 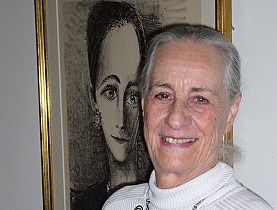 "Every picture here is a piece of my soul"

What makes Switzerland a good place for art. Switzerland is a popular place for trading expensive art. Apart from offering discretion and ...