Singer-songwriter Rezia Ladina has been raising awareness of Switzerland’s fourth language – Romansh – at a Eurovision-style song competition for minority languages.

Ladina was one of the 12 finalists performing before 2,000 people at the Liet International Song Contest for Minority Languages held in Italy.

The performer, who grew up in the Lower Engadine, joined acts from all over Europe singing in their own endangered languages including Gaelic, Asturian and Sami.

Romansh, a Romance language related to Italian and French, is spoken by less than one per cent of the Swiss population, mostly in the southeastern canton of Graubünden.

Ladina, who sang 'Id es capital' (It Happened), lost out to a Dutch female vocalist singing in Frisian at the contest on Saturday evening.

Before the event, Ladina told swissinfo.ch that she believed that she could make a deep connection with audiences even though few people could understand what she was singing.

“I'm talking about serious stuff – about violence,” said Ladina, whose music is described as eclectic but jazz-influenced. “The message is that aggression is all around us, but you don't need to accept what is happening.”

“Even though it's not a party song, I hope that I can really touch people with this song, with my voice and with the instruments,” she said.

The eighth Liet International song contest was hosted by the city of Udine in northeastern Italy. Udine is home to the minority language of Friulan, spoken by an estimated 800,000 people and which belongs to the same language family as Romansh.

Ladina was picked to represent Switzerland after winning the first national Romansh regional heats earlier this year. Similar events have taken place all over Europe to decide representatives from other minority language regions.

“I'm delighted that we have a participant from Switzerland for the very first time,” Onno Falkena, Liet International coordinator, told a media conference ahead of the competition.

He added that Ladina had really impressed her home audience during the regional heats and he was looking forward to seeing how the Italian audience reacted.

The Europe-wide song contest grew out an event in the Netherlands for performers singing in Frisian, which is spoken by about 600,000 people in the north of the country.

Organisers say the raison d'être for Liet International has strengthened over the years. Its more famous cousin, the Eurovision Song Contest, recently dropped the rule that all participants should sing in their national language.

“It has become practically monolingual English,” said Falkena. “It's a huge misnomer that all contemporary music should be in English and every year we get confirmation that this [minority] music deserves attention and that the competition is a worthwhile and interesting event.”

But critics claim that proponents of minority languages like Vepsian, a Finnish-related language which is spoken by about 6,000 people in Russia's Karelia region, risk isolating themselves further in a globalised world.

And the winner is...

In all, 12 music industry members from the participating countries made up the jury which decided the winners by a similar points system used by the Eurovision Song Contest.

Janna Eijer from the Netherlands was picked to win the €2,000 (SFr2,481) prize, with the Austrian band Coffeeshock Company, who sang in Burgenland-Croatian, winning the public vote – made up of audience and television ballots - and €1,000.

Ladina, who came seventh, plans to continue performing in Romansh. “I have this freedom. This means I can express what I'm feeling and I know it's going to turn into something deeply personal,” she said.

She hopes that more Swiss music lovers will now seek out Romansh music.

“Open your ears as it's a great language for music,” she said. “The next time you try to find some unusual music like Portuguese, Italian or Spanish, go and listen to Romansh because it's in your country.”

The eighth Liet International Song Contest for Minority Languages was held in Udine, northeastern Italy, from November 17-20, with the grand final on November 19.

The competition was organised and produced by the Friulan organisation Arlef in close collaboration with Foundation Liet International from the Netherlands.

The contest has the support of the Council of Europe.

Romansh is one of the four official languages of Switzerland. It is spoken only in canton Graubünden by about 70,000 people. There is also a large diaspora in Zurich and other Swiss cities.

Romansh has been a written language since the time of the Reformation. From the beginning, Bible translators and religious apologists sought to write in the local “idiom”, resulting in the establishment of five different written standard forms, each with its own literature.

Romansh Grischun (RG) was introduced in 1982 as a standard language. But it has been controversial and is not accepted by many Romansh speakers. It is, however, used in some media. Attempts have been made to introduce it into primary schools.

A mythical opera in which the part of God is played by a woman has wowed crowds at the Origen Festival in the Graubünden Alps. An original piece, ...

A long-standing controversy about the standardisation of Romansh has broken out again with surprising virulence in canton Graubünden, where the ... 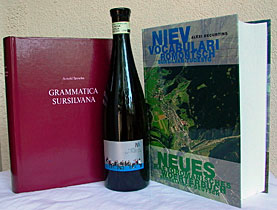 Getting to grips with Romansh

"Co has ti num?" a classful of adults diligently ask each other; after some hesitation swissinfo.ch's correspondent manages: "Jeu hai num Julia". ...