The committee behind a people’s initiative to restore capital punishment for murders involving sexual violence have decided to withdraw it.

On their website, the group said that the initiative, which caused intense debate in Switzerland over the past week, had been the only way for them to make the population aware of problems in the justice system.

The surprising turn in the story comes a day after the Federal Chancellery said the initiative met formal legal requirements. Its supporters would have had until February 24, 2012 to collect the 100,000 signatures needed to force a nationwide vote on the issue.

Switzerland outlawed the civil death penalty in the 1940s, and observers were sceptical whether the initiative would gain enough support. It also raised legal questions.

Parliament would have decided whether the content of the initiative was valid, had enough signatures been collected.

The text had called for the Swiss Constitution to be modified to reintroduce the death penalty for people who committed murder “in combination with an act of a sexual nature against a child, sexual violence or rape”. It had also, according to the Le Temps newspaper, called for the penalty to be applied retrospectively.

The seven-member committee was made up of private individuals related to a murder victim. Its spokesman Marcel Graf confirmed the withdrawal to the Swiss News Agency on Wednesday.

In a statement on its website, the committee said that the initiative – which it had on Tuesday called “fair and logical” - had been a way of airing grievances.

“Our main aim was to make people aware of serious shortcomings,” it said. This particularly concerned what the group alleged was a bias towards perpetrators in the Swiss justice system.

“Politicians must finally move the legal system on the side of the victims,” it said.

Media reports have pointed to a particular case, the murder of a young woman of Asian origin in Switzerland in 2009, as being at the origin of the launch of the initiative, although this has not been confirmed by the committee. Graf, from near Zurich, had stressed that the group was non-political.

The news on Tuesday that the Chancellery had allowed the initiative – on the grounds that it fulfilled formalities – caused a storm of debate within the media, as well as in legal circles and among politicians.

The move was reported as far away as the United States and the United Arab Emirates.

Political parties in Switzerland had roundly rejected the initiative. Only the rightwing Swiss People’s Party had said it was up to the people to decide. The parliamentary group for human rights was also “categorically” against the idea.

Experts also said it was open to question whether the death penalty would be constitutionally legal and in line with Switzerland's international obligations.

Even if it were accepted, they argued, it could have put Switzerland on another collision course on human rights issues – after the anti-minaret building initiative that was approved by the electorate last year.

One aspect that came out during the controversy was legal and political dissatisfaction with the way that initiatives are examined.

Presently, the Chancellery only pronounces on the formalities of the document and parliament has the final say on whether the content is valid – after the signatures have been collected.

Some experts say it would be better for the content to be checked before the text goes out for signatures. Many legal specialists would like to see a court rule on the content. This debate has been ongoing for some time.

There is also some political support for change. Dick Marty, a Ticino politician and human rights specialist, was quoted in Le Temps as saying that initiatives merited “a preliminary, much deeper examination before signatures are collected”.

The centre-right Radical politician Isabelle Moret had already launched a parliamentary initiative, with 23 co-signatories, calling for a court decision before signatures are gathered.

This is due to be examined next month by the Political Institutions Committee of the House of Representatives, according to Le Temps.

In terms of what happens next with the initiative, a Chancellery spokesman said on Wednesday that the text’s backers did not have to do anything and should let the initiative “quietly go to sleep”.

This would mean that the 18-month deadline would run its course and it would be noted as not having gathered enough signatures in that time.

Switzerland struck capital punishment from its criminal statutes in 1942. The last civil execution took place in 1940. A Zurich man was executed for a triple murder.

It was allowed under military law until 1992, for example, for murder or treason in times of war. In the Second World War, 17 executions by shooting took place, with the last military execution in 1944.

An attempt in 1985 to reinstate capital punishment for drug dealers failed as it did not gather enough signatures.

The latest attempt, a people’s initiative to restore capital punishment for murders involving sexual violence, was withdrawn, it emerged on August 25.

Two-thirds of United Nations member states have already abolished, or are in the process of abolishing, capital punishment.

Another 25 countries continued executions in 2009; of these, 95 per cent took place in China, Iran, the United States, Saudi Arabia and Pakistan.

According to Amnesty International, at least 2,390 executions were carried out in 2008 in 25 countries. But the actual number is believed to be much higher.

China announced this week that it is considering dropping capital punishment for economic crimes. International rights groups have criticised China for its heavy use of the death penalty, saying it is excessive.

Campaigners have been given the go-ahead to collect signatures for a people’s initiative to restore capital punishment for murders involving ...

Illustrators Patrick Chappatte and Jeff Danziger talk to swissinfo about the death penalty and their own 9/11 – the 2005 Mohammed cartoon controversy. 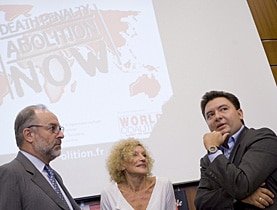 With the current wind of change blowing through the United States, the death penalty will be abolished there in the next 20 years, says a former ... 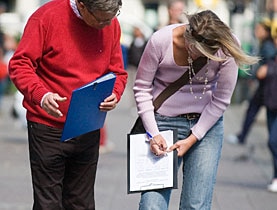 Defending popular rights – by limiting them?

Switzerland's system of direct democracy has won it praise in the past, but a vote to ban minarets has led many to question the much vaunted ...

A Geneva exhibition showcases press cartoons on the death penalty. The exhibition is being held at the Geneva International Conference Centre ...