Switzerland is on track to see the most cases of measles in years in 2017. Vaccinations are on the rise, but the government recently admitted its eradication strategy has failed.

In 1987, the Federal Health Office announced a vaccination strategy that it hoped would eradicate measles by the year 2000. Seventeen years after that deadline, the vaccination rate lies at 87%, below the 95% that the World Health Organization deems a target for eradication.

Daniel Koch, head of the infectious disease unit at the Federal Health Office, told swissinfo.ch that “the number of people who are vaccinated has been consistently rising, but we’re not yet where we want to be”.

Over the past several decades, Switzerland has had significant outbreaks roughly every four years. In a long-term outbreak between 2006 and 2009, Switzerland reached the highest measles rate in Europe with 4,371 registered cases.

To date, Geneva is the only canton to have reached a 95% vaccination rate. French- and Italian-speaking cantons have generally been more successful than the German-speaking part of the country at increasing the vaccination rate and reducing cases, a fact that Koch partially attributes to lasting effects from anti-vaccine movements several decades ago.

“There were more vaccine critics active in German-speaking Switzerland in the 1980s who very strongly resisted vaccinations,” he said. Children born at the time may not have received the measles vaccine as a result.  Koch points out that, today, more than half of measles cases are in adults older than 20.

Measles is the most contagious infectious disease known in humans. There is no cure but a vaccine has been available since the 1960s. In 2000, the disease killed more than 700,000 people worldwide, but by 2010 that number had decreased to 160,000 because of better preventative measures.

Still, a look at measles cases worldwide shows that the disease continues to affect countries all over the world.

Measles symptoms include fever and a rash over the entire body. It usually lasts about a week, but it can also last months and involve complications such as pneumonia.

A measles epidemic continues to spread across Switzerland and now threatens to compromise the fight against the highly contagious disease in other ...

Measles persists due to vaccination shortfall

Switzerland has reported an alarming increase in measles cases this year. As European Immunization Week draws to a close, president of the ... 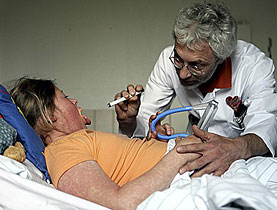 Measles is still a sore spot for the Swiss

Switzerland has one of the lowest measles immunisation rates in Europe, a health official says – far below the 95 per cent coverage needed to ...