Serbian tennis player Novak Djokovic produced the performance of his career to beat Swiss world number one Roger Federer at the Montreal Masters final on Sunday.

Djokovic won 7-6, 2-6, 7-6 in what was a tense and exciting match, putting paid - for now - to Federer's dream of achieving 50 career tournament victories.

Federer had been the overwhelming favourite to win his third Masters crown in Canada in as many appearances.

The five-time Wimbledon champion instead suffered an onslaught in the first set from the 20-year-old Serb, who will now rise to third in the world rankings.

Federer lifted his game in the second set, breaking Djokovic twice to level the contest. But after hauling himself back from 4-2 in the third set, he lost the deciding tiebreak to give Djokovic the Rogers Cup title.

The Swiss, who is 26 years old, was graceful in defeat, saying that the Serb had deserved to win.

"The goal was to win Wimbledon," Federer told reporters. "Done that. Then, try to stay number one in the world. It would have helped to have won... but you can't have it all."

"Looking at the US Open, and down the road, the Masters, there's still a long way to go. I can't start being disappointed about just one match," added the tennis player.

Federer wasn't the only scalp claimed by Djokovic in Montreal. The Serb also defeated Rafael Nadal and Andy Roddick on his way to the final.

This made him the first man since Germany's Boris Becker to beat three top-ranked players at the same tournament.

"It's an unbelievable win for me," Djokovic said of the final. "I couldn't ask for more. I played some impressive tennis all week. This is a dream come true."

"And I hope he's not angry, but I'd like to say to Roger that he can't win everything, sometimes somebody else has to win," added Djokovic.

It was the Serb's fourth tournament win this year and his first in five career matches against Federer. It is his stated aim to challenge Federer for his number one crown.

Federer said he expected Djokovic, a semi-finalist at Wimbledon and the French Open this year, to do well at the US open later this month.

"This might be a breakthrough tournament for him," he said.

In 2001 Federer ended Pete Sampras's 31-match winning streak at Wimbledon in the fourth round of the tournament.

By winning Wimbledon in 2003, Federer joined Stefan Edberg, Pat Cash and Björn Borg as the only players to win both the juniors' and men's Wimbledon championships.

Federer has won five consecutive men's singles titles at Wimbledon (2003-2007), a feat only ever accomplished by Borg. 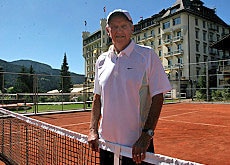 Emerson all set to be overtaken by Federer

Australian tennis legend Roy Emerson says he will cheer Roger Federer on when the Swiss tries to equal his 12 grand slam singles titles at the ... 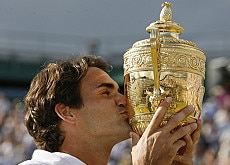