The edelweiss, one of the symbols of Switzerland, could soon be heading down from the alpine slopes into florists' shops.

Scientists at the Agroscope research station said on Monday that they had managed to grow the bloom at ground level and with stems long enough for bouquets.

The whitish star-shaped edelweiss normally grows at between 2,000 and 3,000 metres in altitude. It has been a protected species in Switzerland since 1962.

A research project, launched at the beginning of the year, is aimed at cultivating flower varieties that are typically Swiss to allow flower producers and florists to diversify their offer.

This is necessary to keep up with foreign competition and because energy prices are rising.

Preliminary tests have already shown that the edelweiss can be grown in greenhouses – on coconut fibres – as well as in the open air at ground level, said Agroscope in a statement.

"Our first aim was to see if we could grow edelweiss for cut flowers and to have a stem length of around 30 centimetres," Agroscope's Cécile Gilli told swissinfo.

This is, as far as Agroscope knows, the first time edelweiss have been grown in greenhouses, said Gilli. The flowers are already cultivated for medicinal and cosmetic purposes, but usually in mountain areas.

But Gilli said that it would still be a few years before edelweiss might be bought at the local florist's.

"I hope we'll see them in the shops. We have shown that its possible to grow edelweiss and have long enough stems and now you have to do further work on density of plantation and the production calendar before we can transfer our research to the producers," she said.

"But there are already producers interested in the edelweiss."

Agroscope researchers used the Helvetia species of edelweiss which has a longer flowering season. The first tests at flower growers will start in the spring.

Extracts of the edelweiss, and particularly the Helvetia variety, are used in suncare products and in anti-wrinkle creams. It is believed that the plant's antioxidant properties, a result of its exposure to strong ultra-violet light at altitude, means that it can counteract the human body's ageing process.

The gentian is another flower that is under Agroscope's microscope. Tests will be carried out this year on indigenous species such as gentiana asclepiadea and gentiana pneumonanthe, to observe whether they would be suitable for commercial florists as well.

Work will also be carried out to find out whether florists will take up the edelweiss, said Gilli.

The flower, one of Switzerland's symbols, has long been used in logos and in thousands of tourist articles. It still exerts fascination.

"It's an emblematic flower, an image of Switzerland. And normally it's quite rare," Gilli said.

There are around 41 types of edelweiss, which originally comes from Asia.

It can be found in the Alps, the Pyrenees, Siberia, Afghanistan, the Himalayas, Japan and China.

It is often identified with Switzerland, and is or has been used as the emblem of the national tourist board, as an army insignia and the name of a charter airline. 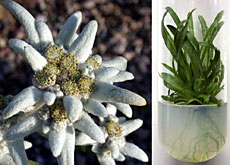 Edelweiss blooms in the test tube

Swiss scientists say they have developed a new method to speed up the process of reproducing the Edelweiss flower. The Agroscope research station ...