Elisabeth Kübler-Ross earned worldwide fame in 1969 with the book On Death and Dying. Fifty years after the book’s publication, Swiss film director Stefan Haupt looks back on the making of his documentary about the pioneering Swiss psychiatrist.

As told to author Jeannie Wurz.

I remember when I was 20, in the early 1980s, talking with my parents and saying how strange it was that I had never seen a dead person. Already, my interest in how we deal with death was there.

In 1998 I was on my way to a film festival in Marseille. In the train station bookshop I was looking for something to read while travelling and I saw The Wheel of Life, Elisabeth Kübler-Ross’s autobiography. I bought it and read it, and it really touched me.

A psychiatrist, she became famous after publication of her book On Death and Dying in 1969. She was known for her theory that the dying pass through five stages of grief: denial, anger, bargaining, depression and acceptance.

I thought that making a movie about her life would interest me, but I wasn’t yet established as a filmmaker. I decided to take it on anyway, mainly due to my curiosity and my interest in the subject. That documentary about the life of Elisabeth Kübler-Ross was one of my earliest projects.

A quick US trip

At first, it was quite difficult to get in touch with Kübler-Ross. Finally, I got her phone number from a journalist and I called her in Arizona, where she was living. I said I wanted to do a documentary about her life, and she said, “Well, I never say no to a Swiss person. You can come, but come fast, because I’m not sure if I’ll live until Christmas.”

So I went to the US. I had read The Wheel of Life and On Death and Dying. And I remember sitting in the airplane and thinking, “Am I crazy? I’m going to interview Elisabeth Kübler-Ross and I’ve only read two of her books.”

I took a friend of mine along. I couldn’t pay him a salary – only the plane ticket and hotel and food. He was also a director but knew how to film. We used a very, very simple consumer camera, with two very small additional lights, just to give tiny spots, and a bad-quality microphone. Elisabeth had had several strokes, and she was afraid that bright lights would cause another one.

The first day I remember that she was very, very tired and not so clear in her answers, and it felt like she told me things that she had told a thousand people a thousand times. That night my friend said, “Listen, you’ve really got to provoke her in order to get something new!” But I didn’t like that approach too much. I wondered all night how I could best reach out to her.

The next morning I told her, “I think it will be much more interesting if we just meander around. You can ask me questions too. I’ll tell you whatever you want to know. Let’s just talk.” She brightened up and said, “Oh, that’s just fine! That's the way I did it with my students.” And from that moment on we had really nice, interesting conversations, every day for one hour in the morning and one hour in the afternoon.

We were at her house in the desert for five days. Every day she talked more. Mainly we spoke English together. She would normally lapse into it. But to me she still felt very Swiss, even after living in the States for 40 years.

Swiss film director Stefan Haupt was born in Zurich in 1961 and has worked as an independent filmmaker and director since 1989.

His most recent film is Zwingli, about Swiss reformation figure Huldrych Zwingli.

She had a kind of stubbornness, a sort of pride, like, “Even if Switzerland is much smaller than the United States, if I believe that my way is the right way, then I do it that way. I do it my own way!” Not everyone liked her for this attitude, but it made her very strong.

From what I could tell, being the oldest of triplets, she must have had a lot of fights with her father. He had a rigid structure and rules, and if she didn’t understand these rules she would fight against them, really hard.

But her anger was not only directed at her father. There was one story in the film, of confirmation class, when she threw a Bible at the reverend’s head because she was so angry at what he had said. This was sort of a scandal in Meilen where they lived, outside Zurich, and the triplets didn’t get permission to be confirmed there. They had to go to Zurich, and funnily enough they went to a church that was 200 yards away from where I grew up.

Most of all, though, Elisabeth could really listen. That was a huge quality that she had. That she could listen to patients. And was not afraid to pose all sorts of questions.

We talked about many, many things but I couldn’t put everything into the movie. I didn’t want to make a holy person out of her – and I don’t think I do this in the film – but at the same time I didn’t want to provide easy ammunition for people ready to attack her for the esoteric beliefs that she held.

I had filmmaker friends who said, “Are you crazy? To do a film on her? Do you know what she said? I can’t take her seriously.” And I would say, “Hey, even with the parts to her that you can question, what she did was so amazing and so big, it’s worthwhile telling her story.”

The day before we had to fly back we had said goodbye to Elisabeth and were planning to film some more scenery. Then my friend said, “You know, let’s call her and ask if we should cook a Swiss meal for her. So we called and asked what she would want. And she said, “Älplermagronen” – Swiss Alpine macaroni.

So we went to the supermarket and got the ingredients, and we went to her place and we cooked for her, and together the three of us had this lunch. And she was so happy. She said that was the best Älplermagronen that she had had in decades. And then she said, “Now let’s call your mothers. I have to tell them that you are really nice guys.”

My friend’s mother was the head of a retirement home and was very fond of the books of Kübler-Ross. So it was very funny to hear Elisabeth call her and tell her “You have a really nice boy”. And then she called my parents and said the same thing. “Really great. You can be proud.” And for my parents, who always had this notion of being just simple people, it was really a thrill that Kübler-Ross would call.

When I got back from the trip, I had to start working on a feature film, so I just put all the tapes in a safe in a Swiss bank and waited. I shot more footage in Switzerland and the US in the years that followed, and four years after we started, Facing Death – Elisabeth Kübler-Ross was done.

Elisabeth wanted to see it. I was afraid to send her the VHS cassette – I was afraid of how she would react. But I knew I had to do it. So I sent it, and one evening I got a phone call, in Swiss German.

“Yes, this is Elisabeth. I just saw your movie. Isch aso cheibe guet.” She loved it. And I loved to hear that, of course.

Everybody was really surprised at how well the film did in the theatres. I remember a film distributor who wanted me to take out “Facing Death”. “Nobody wants to see a film where death is mentioned in the title!” he said. But since I produced the film myself I could say that this was the title and he had to accept it. We didn’t change it.

It’s interesting to me how different people describe the movie in different ways. I knew people who told me they were too afraid to watch a film on the subject of death, or thought they would be too depressed. Someone else said, “What a humorous, light film! I loved it from the beginning.”

When I think of the film I don’t remember it as sombre. Of course, you see people dying; this is not a funny subject. But I was always surprised by the way Elisabeth would talk about death.

I remember one day as we were talking she asked whether I had children. I said yes. “And do you talk with them about death?” And I told her about when I was with one of our children and there was a dead bird lying on the ground, and we watched it and talked about it. And I think we buried it. And she said, “Oh, great!”

That was her reality. There is life and there is death. We should have death more at the centre of our lives. Death is a part of life. That really impressed me.

A new film about the life of Elizabeth Kübler Ross is drawing big audiences across Switzerland. "Facing Death", by the Swiss film director, ... 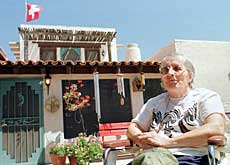 Elisabeth Kübler-Ross, an internationally known author and expert on death and dying who pioneered hospice care, has died. She was 78. Family ...