The Council of the Swiss Abroad has called for Swiss expatriates to be able to cast their votes electronically – by the 2011 federal elections at the latest.

The request was made at the spring meeting of the governing body of the Organisation of the Swiss Abroad (OSA) in Bern on Saturday, which focused on political participation.

The council also demanded that eligible voters abroad receive campaign information from all Swiss political parties ahead of the federal elections on October 21.

At the end of 2006, of the 645,010 Swiss residents living abroad, 111,249 were entitled to take part in Swiss votes and elections – "quite a significant" number of voters, according to the OSA. In canton Geneva the Swiss abroad represent up to 6.3 per cent of voters, for example.

The OSA is therefore pushing for the Swiss abroad to become more involved in political debate and to "defend their interests".

Together with swissinfo, the multi-language internet platform of the Swiss Broadcasting Corporation, the OSA is launching a special online forum ahead of the autumn parliamentary elections and is organising a campaign to encourage people to vote, together with the four main political parties.

The meeting was also an opportunity to discuss Swiss progress in the area of e-government and e-voting.

For the OSA, e-government is "an effective way for residents living far from Switzerland to keep in direct contact with their administration".

It therefore asked that efforts be stepped up and harmonised in Swiss consulates and embassies throughout the world.

But much work still needs to be done to be in a position to offer e-voting by 2011.

"Things have to be accelerated at both federal and cantonal levels," said ambassador Markus Börlin, head of the foreign ministry's Political Affairs Division VI which deals with the Swiss abroad.

The 100 OSA participants in Bern also received a snapshot of the programme of the forthcoming 85th annual meeting, which will focus on Swiss involvement in humanitarian work.

President Micheline Calmy-Rey and the president of the International Committee of the Red Cross, Jakob Kellenberger, will attend the meeting due to take place in Geneva from August 18-20.

Its main task is to promote the interests of all Swiss expatriates regarding the authorities and public opinion in Switzerland.

The council meets twice a year (once to coincide with the annual Congress of the Swiss Abroad) to examine political issues of concern to the Swiss living abroad.

The Council currently consists of 130 representatives of Swiss communities abroad and 40 members from inside Switzerland.

Benedictine missionaries Urs Egli and Gerold Neff are the joint winners of the 2007 Swiss expatriate prize, which is awarded each year to an outstanding member of the Swiss abroad.

Egli and Neff, who are both aged 80 and are attached to the Engelberg monastery, were awarded the prize for over 50 years' humanitarian work in Cameroon.

The Swiss expatriate prize, which is awarded by the centre-right Radical Party, is now in its sixth year. It is given annually as a way of supporting and raising awareness of the Swiss abroad. 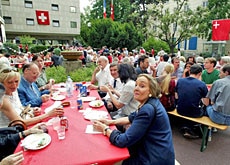 The number of the Swiss living abroad is growing constantly and now exceeds 645,000, the foreign ministry revealed on Thursday. At the end of ... 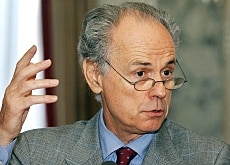 Parliamentarian Jacques-Simon Eggly may be bowing out of politics after 30 years but he is not about to turn his back on the many Swiss who live ... 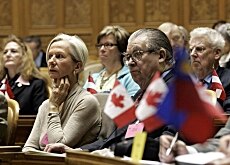 The Council of the Swiss Abroad is to step up efforts to raise awareness at home of the Swiss expatriates and facilitate their participation in ...