Cannabis and heroin are once again high on the agenda as the campaign ahead of a nationwide vote on Switzerland's drugs policy gathers pace.

A first opinion poll found that the prescription of heroin for addicts stands a good chance of passing on November 30. However, a proposal to decriminalise cannabis attracts neither a clear majority of supporters nor opponents six weeks before the ballot.

"Both camps are equally strong and the debate focuses on whether hemp is a health risk or not," said Claude Longchamp of the GfS Bern polling and research institute.

Those who believe that a ban on pot smoking is ineffective have a majority at present, Longchamp added.

Forty-five per cent of respondents in the poll said they would vote for decriminalisation, while 42 per cent came out against.

However, Longchamp is uncertain whether supporters will hold on to their lead.

The people's initiative foresees the legalisation of psychoactive hemp for personal consumption, while the trade and cultivation of hemp would be subject to state control. The state would also have to ensure that minors don't have access to cannabis products.

The government's four-pillar strategy on drugs – based on prevention, harm reduction, therapy and repression – is very likely to win a majority at the polls.

Longchamp says the 43 per cent margin between supporters and opponents is not expected to crumble because even the grassroots of rightwing parties approve the official policy.

It will be the third ballot on drugs in just over a decade. In 1998 voters rejected a proposal to decriminalise cannabis just one year after they turned down a call at the other end of the scale to introduce a restrictive drugs policy based on abstinence.

A government proposal to allow the handing out of heroin under medical supervision for addicts, but limited to a ten-year trial phase, was given the green light by the electorate in 1999.

Prescription, a component of therapy, is part of the four-pillar policy adopted in response to the open drugs scenes in Zurich and other Swiss cities during the 1990s.

Supporters of the revised drugs law, including most of the main political parties, say the government policy has been successful.

"The number of drug-related deaths per year dropped from 400 at the beginning of the 1990s to 152 last year," said Felix Gutzwiller, a Zurich senator of the centre-right Radical Party.

He said every year up to 200 out of some 3,000 registered heroin addicts complete a programme where they receive heroin under medical supervision and go on to join a methadone-supported treatment.

"It is telling that drugs issues are no longer top of the list of public concerns, unlike 20 years ago," he said.

Switzerland played a pioneering role which has been adopted by more than 80 countries worldwide.

Drugs experts are pleading that cannabis consumption should be considered in a wider context.

"A majority of the government advisory committee stands by its conclusions from 1999 to find a system regulating access to cannabis products."

The committee headed by François van der Linde said prevention and the protection of underage youth should also be taken into account.

In its campaign the government cautioned against rushing through legislation for which there was no majority in parliament four years ago.

Interior Minister Pascal Couchepin said decriminalising pot smoking could pose problems for Switzerland as a signatory state of international conventions on cannabis use.

Other opponents, particularly the rightwing Swiss People's Party, warned of the health hazards for young cannabis consumers and the negative impact for Switzerland's image abroad.

Supporters of cannabis decriminalisation argue that the proposal foresees state control for the trade and cultivation of hemp.

Such regulation is better able to protect young people who might otherwise try to buy dope on the black market, according to Maria Roth-Bernasconi, a parliamentarian of the centre-left Social Democrats.

The camp in favour also has backing not only from the Left of the political spectrum, but also from unexpected quarters, including the centre-right Radical Party and the Neue Zürcher Zeitung newspaper.

The respected daily describes both the amended drugs law and the hemp initiative as a step in the right direction.

"A policy which is only based on abstinence, bans and repression ultimately leads to more spending on welfare. It also is against the spirit of liberalism and leaves no room for people to take responsibility for themselves."

About 26,000 heroin addicts in Switzerland receive methadone under medical supervision, according to the government.
About 1,300 addicts are being treated in medically controlled heroin programmes.
The number of annual drug-related deaths has dropped from 400 to 157 over the past 15 years.
An estimated 500,000 people say they regularly or occasionally smoke cannabis.

The people's initiative, launched by politicians and experts, wants to allow cannabis for personal consupmption.

It was launched in the wake of parliament refusal in 2004 to decriminalise psychoactive hemp.

The drugs law was approved by parliament last March.

A small ultra-conservative party, supported by the rightwing Swiss People's Party, challenged the decision to a referendum.

An opinion poll commissioned by the Swiss Broadcasting Corporation, swissinfo's parent company, found the following intentions on the topics up for November's vote:

Drug policy
45% of respondents said they would approve the decriminalisation of cannabis, 42% came out against, while 13% were still undecided.

The four-pillar drugs policy, including the medical prescription of heroin to addicts, has the backing of 63%, while 20% reject it and 17% are undecided.

Planning permission
Proposals to curb the powers of environmental groups to appeal against building projects were supported by 42%, opposed by 40% and 18% were undecided.

The proposed extension of the statute of limitations for paedophile crimes - a fifth issue to come to a vote on November 30 – was not included in the survey.

Turnout is expected to average 41%.

The poll was carried out among 1,204 citizens across the country in mid-October. 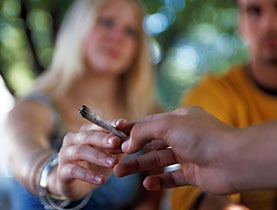 Interior Minister Pascal Couchepin says Switzerland could be in violation of international rules if voters in November approved a proposal to ... 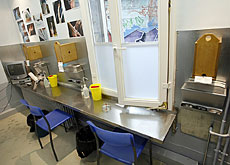 Drug prevention experts have expressed disappointment at a decision by voters in Lausanne to scrap plans for an injection room for the city's ...