Parliament has begun discussing the government's rescue package for the country's financial system, including a bailout plan for the leading UBS bank.

The House of Representatives agreed in principle on Monday to accept the Swiss National Bank's cash injection of SFr6 billion ($5 billion) and $54 billion government loan, with 116 votes in favour and 55 against the UBS bailout.

Parliamentarians debated the issue for nearly seven hours. The plan will go before the Senate on Tuesday.

As part of a reform of the law on banks, the House of Representatives on Monday unanimously approved a government plan to more than triple account holder protection to SFr100,000.

Special debates staggered over the next few days are an opportunity for politicians to comment on the impact of the global economic crisis on Switzerland and highlight the failures of the banks.

Several political parties have made approval of the financial rescue package conditional on additional measures and reforms of the banks. However, parliament's options are very limited and it is expected to rubberstamp the government's decision announced in October.

The centre-left Social Democrats have criticised the proposed bailout plan as irresponsible and called for an alternative, similar to the rescue plan by the British government.

The group – the second largest in parliament – also demands that managers' salaries be capped as well as a ban on huge bonuses, and it wants the reimbursement of payment made to top bankers held responsible for the meltdown.

The Green Party, alongside the Social Democrats, has slammed the government for bypassing parliament when the credits were approved nearly two months ago.

"We are not willing to simply rubberstamp the financial package. It goes against democratic principles to sidestep parliament," a party statement said.

On the other side of the political spectrum, the rightwing Swiss People's Party has come out in favour of the bailout plan in principle.

"State intervention in the market is not desirable. But the proposed emergency measures are needed to shore up the whole financial system and the country's economy."

The two centre-right parties have defended the government plan.

"It would be irresponsible to reject the package, jeopardising tens of thousands of jobs and small and medium-sized businesses," the Radical Party said.

The Christian Democrats say UBS has begun implementing the necessary internal reforms on corporate governance. The party also called for government plans for an economic stimulus package for private and public transport.

The government argued its rescue package for the financial system was vital to stabilise the country's economy, with the two leading banks UBS and the Credit Suisse Group jointly holding a 35 per cent market share for domestic credits.

"Households and firms would no longer be able to have access to cash and make investments if one of the big banks were no longer operational," the cabinet said.

The government is convinced that the creation of a special fund - financed by a Swiss National Bank loan worth up to $54 billion for securities that have gone bad - is a promising step. It would allow the federal authorities to sell securities again at a later date once the markets have recovered.

However, experts have dismissed the strategy as unconvincing.

Volker Grossmann, professor of economy at Fribourg University, said it was unlikely the value of the illiquid securities would increase.

"The general public will have to shoulder the burden," he told the Tages-Anzeiger newspaper.

In a similar vein, Rudolf Strahm, an economist and former price ombudsman, has described the Swiss model as "badly designed".

In an interview on public radio he called for improved account holder protection of Swiss bank customers and tougher capital requirements for the banks.

UBS was hardest hit by the US subprime-mortgage crisis. It wrote down about $44 billion and announced 1,500 job losses.

The Credit Suisse (CS) says it will axe 5,300 jobs worldwide, including 650 in Switzerland.

UBS is to benefit from a bailout plan to the tune of more than SFr60 million, while CS said it would not participate in the programme.

A $700 billion-rescue package by the US government was originally aimed at purchasing bad assets to reduce uncertainty regarding the worth of the remaining assets.

The £50-billion plan by the British prime minister, Gordon Brown, combines injections of liquidity into the market and guarantees to encourage banks to start lending to each other again.

Many European Union countries followed the lead of the British government.

The Swiss government's rescue package includes a $54 billion loan to the leading bank and a SFr6 billion injection of cash to bolster the bank's capital basis. 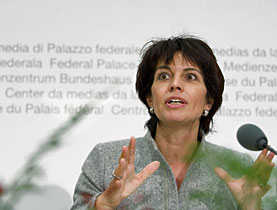 The government says it intends to stimulate the Swiss economy with up to SFr1.5 billion ($1.26 billion) in 2009 in view of the global financial ... 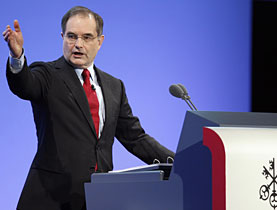 Shareholders at Switzerland's largest bank, UBS, have voted in favour of a $60 billion (SFr72 billion) rescue package from the Swiss National Bank ... 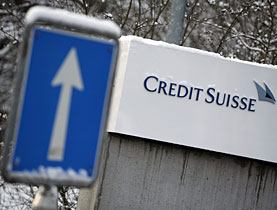 Credit Suisse on Thursday said it would cut 5,300 jobs – 11 per cent of its global workforce – including around 650 positions in Switzerland. The ...