One might think that Germans would have no language problem when they come to German-speaking Switzerland, but often they are stymied by the local dialect.

On the other hand, Germans who have been here for a while say dialect opens up the secret places of the Swiss heart.

Recently, there has been a wave of German immigration to Switzerland, mainly because of the EU-Swiss agreement allowing free movement of people to take up jobs.

One now meets Germans everywhere in the German part of Switzerland. They present a new cultural and linguistic challenge - mostly because they don’t speak Swiss German.

There are classes, books and CDs for learning Swiss German dialect, so if you really want to, there is no obstacle to it. However, research, journalistic investigations and everyday observation suggest that the majority of Germans who come here do not learn to speak Swiss German actively.

They are held back by inhibitions that do not bother other foreigners. They tend to say “when I try it, it sounds ridiculous!” or “it’s not my dialect!”. Meanwhile, Swiss commentators find it’s enough for the newcomers to understand Swiss German and not to speak it.

Elisabeth Maranta, a German who runs a bookshop in Chur specialising in languages, must be something of a record. She has lived here for 50 years and has never spoken Swiss German, although she certainly understands it by now.

She explains: “First I was in French-speaking Fribourg, then I married an Italian-speaking Swiss, and we have always spoken high (standard) German at home. Growing up with high German actually gave our children an educational advantage.”

“German Swiss are often at a disadvantage when they have to speak high German outside Switzerland, say on German TV. Even academics seem tongue-tied.

Why do they stick to Swiss German when it’s such a barrier?” Maranta wonders. She gives two reasons: “It is important for German Swiss to set themselves off from Germany and affirm their own identity. But also, dialect gives them a deep feeling of belonging.”

Harald Eichhorn is the rector of Chur Cathedral. A German from the Lake Constance area near the border with Switzerland, he came to this country as a young curate in 1985. He was a parish priest in Schwyz for many years before moving to Chur. Now a Swiss citizen, he is unusual in actually speaking Swiss German with gusto.

“There is no way you can avoid learning Swiss German as a pastor,” he says. “It is a matter of integration into local society. You need people to be able to communicate with you uninhibitedly.

“And a Swiss feels inhibited if he can’t talk Swiss German. He just can’t express his feelings or say what is in his heart, if he has to say it in high German. You can establish a relationship of trust with a Swiss if you can talk Swiss German yourself. So for me as a priest it was absolutely necessary.”

He explains: “it wasn’t all that difficult for me, because I come from a place where we spoke Alemannic dialect, which is like Swiss German. Other Germans who come here don’t learn to speak Swiss German because they can’t get their tongues around it. It’s not really arrogance on their part when they don’t want to speak it.”

Close to the heart

That idea of Swiss German as “language of the heart” is echoed by Klaus Scherer, director of the National Centre of Competence in Research in the Affective Sciences, an institute based at Geneva University which concerns itself with all aspects of emotion.

A German by birth himself, Scherer has had the opportunity to observe the emotional underpinnings of language in a career in Germany, the United States and latterly Switzerland.

“I think German Swiss always find it an emotional strain when they have to speak high German. As soon as a German joins the conversation, the emotional quality of the interaction changes: it is no longer spontaneous, it is slower and less expressive, the intonation gets flatter, even nonverbal behaviour is more inhibited.”

Swiss are able to express their emotions in Swiss German, not in high German - that is the key difference, he says.

“When one has learned a second language but doesn’t feel at ease speaking it, one cannot express one’s real feelings. Emotions are in themselves not verbal, but we do not know what emotions we have until we have words to express them. That channels the emotion. It also helps us to control our feelings. The expression of emotion is therefore an important function of language.”

So Swiss German survives and thrives because it fulfils important emotional needs. It is the language of the heart for German Swiss. Germans - and even other Swiss - need to learn to appreciate that fact.

Geneva Green deputy Antonio Hodgers, who arrived in Bern this past year, has been causing controversy with his comments on the challenges for a French Swiss living in the German area.

Recently he has introduced a number of motions in parliament, including the proposal that Swiss German should be recognised as a regional language under the European Charter on Regional and Minority Languages, to which Switzerland is a signatory.

At the same time, he proposes that Swiss German should be confined to the private sphere, and not used in public communication. Neither of these proposals is winning much interest or support from Swiss German commentators so far.

Swiss German is a classic case of what linguists call diglossia.

In many European countries dialect is stigmatised as being for the lower socio-economic strata and the uneducated.

But in diglossia situations like German Switzerland, this is emphatically not the case. Everyone speaks dialect, from dukes to dustmen.

There is not one Swiss German dialect, but one for every city and region. The high German language is used only when writing or in very formal contexts like political speeches and broadcasts – and of course when talking to Germans and other foreigners.

High German is the language of the schoolroom, and many German Swiss profess to dislike speaking it or even hearing it, because it reminds them of school. They are used to reading it as a written language, of course.

Swiss German is a remarkable success story that continues to make progress at the expense of High German - notably in broadcast media and in mobile phone texting by young people.

Learning how the other half lives – and speaks

Switzerland is a country with four official languages. While many Swiss are impressively fluent in more than one of them, barriers remain. Even ...

It has not been easy for Germans in Switzerland of late – right wingers think there are too many of them, and furthermore, Berlin may well buy ... 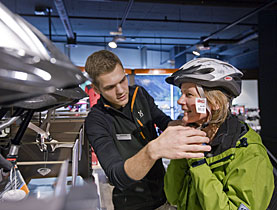 Foreigners who speak fluent German often get a nasty shock when they come to Switzerland: they find they can't make head or tail of what the Swiss ...

Pictures by the Magnum agency's Swiss photographer René Burri. Burri became a full member of Magnum in 1959, when he started work on his book, ...