Roger Federer has recently snapped up a plot of land on the shores of Lake Zurich. Although the law says waterways belong to the public, the tennis star, like many wealthy home-owners, isn’t losing sleep about a footpath being built through his land. The authorities, after all, are on his side.

Federer and family are moving to Rapperswil-Jona, a municipality in canton St Gallen, northeastern Switzerland, having bought a property the size of three football pitches with lake access.

There has never been a lakeside public path through the property, which previously was also in private hands, but its new high-profile owner means the spotlight is shining once again on this long-running issue.

Pedestrians have to go on a large detour around Federer’s property, despite the Federal Act for Spatial Planningexternal link having said for 40 years that “lakesides and riverbanks should be kept free and accessible to the public”.

Martin Stöckling, mayor of Rapperswil-Jona, doubts whether the spatial planning law presents a legal basis for expropriation but also says there’s no urgency from a political point of view.

“It’s not an issue for us because there are countless places where the public can access the lake without any problem,” he says, pointing out that a roughly seven-kilometre path runs along the shore of the upper lake part of Lake Zurich, where Rapperswil-Jona is located.

But should public pressure for an unbroken lake path grow in Rapperswil-Jona, things could get tricky for the local authorities. Which local politician wouldn’t think twice about sending in diggers onto the land of a national sports hero so that the world and their dog could walk by?

Stöckling will only say that implementing a lake path on private properties along the Gold Coast – as the wealthy lower eastern shore of Lake Zurich is known – is an “impossibility”.

In his view the demands of the cantonal parliament in neighbouring Zurich – to anchor unbroken lake access in the constitution – are neither politically nor legally feasible.

“There are enough people with enough money to prevent any legal action,” he says.

According to the spatial planning law, all lakes and rivers in Switzerland belong to the public. What’s disputed, however, is whether that includes riverbanks and lakeshores. In 2001 the federal court said waterways and banks were an “inseparable unit”.

Shore-dwellers see things differently. They point to the protection of property and have defended themselves in countless legal cases against what they see as expropriation.

The fact that access to all waterways is still not possible 40 years after the law came into effect is often because inhibited local politicians don’t want to upset their best taxpayers and therefore prevent construction or at least help to delay it.

The super-rich love to buy Swiss villas with private access to water. The snag is that, legally, the public have access to all lakes and rivers.

The Swiss vote on pretty much everything. But implementing controversial local ballot box decisions can be a major headache.

By Simon Bradley in La Tour-de-Peilz

Residents of La Tour-de-Peilz in western Switzerland are set to vote upon a controversial plan to build a public footpath in front of luxury Lake ... 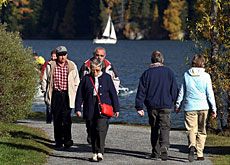 Millionaires may have to open lakeside footpaths in front of their luxury lakeside properties – that is if a Swiss lobby group gets its way. ...