Justice Minister Christoph Blocher has called on Swiss voters to back a new partnership law for gays and lesbians on June 5.

Blocher said the nationwide vote was not about promoting homosexuality but enshrining greater rights for gay couples within the law.

At a news conference in Bern on Friday, Blocher said the law would bring improvements in the areas of inheritance and pensions. Couples entering registered partnerships would have certain rights and obligations.

The minister said that while current legislation generally allowed for single-sex couples to be treated in the same way as their heterosexual counterparts, "there is a need that these unions be considered registered partnerships in the way that marriages are".

But he stressed that gay partnerships would not have the same status as traditional marriages and that homosexual couples would not be allowed to adopt children or have access to fertility treatment.

"A registered partnership is not a marriage, it is an institution for those people who by definition cannot marry."

A yes vote on June 5 would give a legal framework to gay rights and show the world that Switzerland had a progressive policy, Blocher said.

In canton Zurich 483 same-sex couples have registered their partnerships since a cantonal law came into effect on July 1, 2003.

Markus Notter, a member of Zurich’s cantonal government, said there had been a big response with 93 female and 390 male couples registering in the canton.

Notter said that although the experience in Zurich had been a positive one, the absence of nationwide legislation had caused problems. Three registered partnerships had since been dissolved because the couples concerned had moved out of Zurich.

Similarly couples arriving in Zurich from Geneva or abroad, where their partnerships had been registered, had been obliged to re-register with the Zurich authorities.

Ruth Reusser, deputy director of the justice ministry, stressed that the law was necessary to regulate inheritance and pension issues, as well as the right of foreign partners to live in Switzerland.

Comparing Switzerland with other European countries, Reusser said that while neighbours Italy and Austria do not have rights for gay couples enshrined in law, both the Netherlands and Belgium allow gay marriages.

On June 5, Swiss voters will decide whether homosexual couples are to be legally recognised.
Parliament gave the go-ahead last June, but Switzerland’s Evangelical Party launched a referendum.
The rightwing People’s Party, which Christoph Blocher belongs to, is the only government party opposed to registered partnerships for gay couples.
The Radicals, Christian Democrats and Social Democrats are all in favour.

The honeymoon is over for some of Geneva’s "married" homosexuals, who have begun dissolving their legally recognised partnerships. Some 215 gay ... 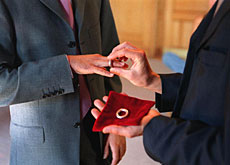 The Swiss parliament has voted in favour of allowing gay couples to register their partnerships. The Senate followed the House of Representatives ... 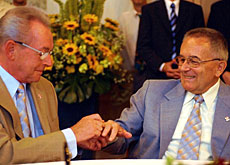