Ten years ago Swiss pharmaceutical giant Novartis commissioned clinical trials for a bird flu vaccine which ended up being carried out on homeless people in Poland. One man, who says they were told they were being tested for a conventional flu vaccine, is now suing the Basel-based company.

When the H5N1 virus broke outexternal link among birds in Europe in 2005, scientists feared it could be transmitted from human to human and cause a pandemic. The pharmaceutical industry across Europe rushed to develop a vaccine.

In 2007, Novartis engaged a company based in Germany and Poland to test a vaccine. This company did so in a clinic in the Polish city of Grudziadz. The subjects – homeless and poor people – were reportedly paid around CHF2 ($2) to be tested on what they thought was a vaccine for normal flu.

Although no deaths have been directly proved as a result of the trial, the director of a homeless centre in Grudziadz told a Polish paper that in 2007 there were 21 deaths in the centre, compared with the average of about eight.

Now, one of the subjects, Grzegorz S., has launched a civil suit against Novartis.

“No one told us it was a test for a new drug. The whole time they said it was a completely normal vaccine for the normal flu,” he told 10vor10external link, a news programme on Swiss public television, SRF, on Wednesday.

The arbitration process took place in Basel at the beginning of July but no agreement was reached, Grzegorz S.’s lawyer told 10vor10.

Grzegorz S.’s is now suing Novartis for CHF50,000 in compensation and at least CHF50,000 of the profits generated by the vaccine.

The lawyer said Novartis was clearly liable. “The sponsor of the tests – that is, whoever arranges them and receives the profits – must be responsible for the actions of their auxiliaries,” he said.

In a statement sent to swissinfo.ch, Novartis said: “The criminal proceedings of the case in Poland were concluded earlier this year with the conviction of the accused healthcare professionals for conducting clinical trials without proper consent of the subjects, and also for defrauding Novartis and another third party as to the veracity of the clinical trials.”

It added: “Novartis is pleased that this long-running criminal case in Poland has finally been concluded and that those who were guilty of fraudulent actions that may have put patients at risk have been brought to justice. We stress that while the criminal proceedings in Poland were comprehensive, Novartis was not under investigation at any time in connection with this case. Novartis is committed to the highest standards at all times and demands the same from external partners we work with.”

The company underlined that “all Novartis clinical trials adhere to the ethical values embodied in the Declaration of Helsinkiexternal link and Good Clinical Practiceexternal link, which safeguard the health and human rights of patients in clinical research”.

Regarding the civil suit in Basel, Novartis said it did not comment on ongoing legal cases.

Influenza – is it ethical to spread the H5N1 formula?

The planned publication of avian flu research papers has sparked global controversy. In response, the Geneva-based World Health Organization (WHO) ...

Flu shot debated ahead of vaccinations

As Switzerland prepares to roll out a national campaign for vaccines against the H1N1 virus, opinion is divided on whether mass vaccinations are ... 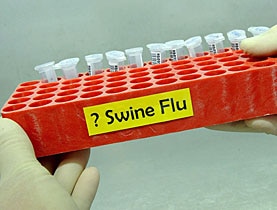 Pharmaceutical companies worldwide are poised for a race to find a vaccine for swine flu but are still waiting for the go-ahead from the global ...