An international relief effort for Haiti, devastated by a major earthquake on Tuesday, has gotten underway. Thousands are feared dead.

Haiti's worst quake in more than 100 years, measuring 7.0 on the Richter scale, struck late in the afternoon local time about 16 kilometres southwest of the capital Port-au-Prince, followed by numerous aftershocks.

The Geneva-based International Red Cross and Red Crescent Movement and United Nations agencies said they were mobilising dozens of disaster response teams, many of which would arrive in Haiti later on Wednesday.

The most urgent needs, according to the Red Cross, are search and rescue, field hospitals, emergency health, water purification, emergency shelter, logistics and telecommunications.

A spokesman for the International Committee of the Red Cross said the Haitian Red Cross was completely overwhelmed and that there was very little information about the scale of the disaster.

Normal communications have been cut off, the United Nations said, and the only way to talk with people on the ground was via satellite phone. Roads were blocked by rubble.

However, the UN said the airport in Port-au-Prince is operational and relief deliveries have started to arrive.

A quick-response team from Switzerland left for Haiti on Wednesday morning. Its task, according to the foreign ministry, is to "strengthen" the Swiss embassy and the ministry's development aid office "to identify what needs to be done and to initiate emergency measures".

Around 130 Swiss nationals are believed to reside in Haiti. At the moment, none have been found to be among the victims, the ministry said.

The Swiss government has offered its assistance to the Haitian government. A decision is expected to be taken shortly on the sending of Swiss search and rescue teams.

The headquarters of the UN mission in Haiti was seriously damaged by the quake, with the main structure collapsing and most of the 100-150 people in the building at time are unaccounted for. Fewer than 10 have been recovered from the wreckage, "some dead, some alive", said the UN peacekeeping chief, Alain Le Roy.

Among the missing is the head of the UN mission, Hedi Annabi.

Various governments have confirmed that at least 23 international peacekeepers were killed – 11 Brazilians, eight Chinese, three Jordanians and an Argentinian.

Haiti’s National Palace, a hospital and a big hotel are among other buildings badly damaged, and rescuers are digging under rubble.

According to the French government, only 100 of the 300 people staying at the hotel were able to get out of the building.

Haiti's envoy to the United States said it was a "catastrophe of major proportions".

"You have thousands of people sitting in the streets with nowhere to go," a charity worker, Rachmani Domersant, said in the immediate aftermath. "There are people running, crying, screaming."

"I think hundreds of casualties would be a serious understatement."

Witnesses said they saw homes and shanties built on hillsides come tumbling down as the earth shook.

The quake prompted a tsunami watch for parts of the Caribbean but this was later lifted.

The Swiss Red Cross has released SFr1 million towards emergency aid for the victims of the Haiti earthquake.

A Swiss team is expected to travel to the scene on Wednesday, the organisation announced.

Swiss Solidarity, a charity led by swissinfo.ch's parent body, the Swiss Broadcasting Corporation, is asking for donations for the victims of the earthquake.

The charity said it would work alongside Swiss relief agencies in the coming months to aid victims and support reconstruction efforts.

Swiss Solidarity and its partner organisations have freed up SFr2.5 million for the relief efforts.

According to Swiss seismologists, Tuesday’s earthquake was the worst tremor to strike Haiti since 1870.

Stefan Wiemer told the Tages-Anzeiger newspaper that Haiti sits on the boundary of two tectonic plates - the Caribbean plate and the North American plate - creating a fault system across the country.

“We knew that there would eventually be a release of this great tension, and that has now happened,” he said.

Tuesday’s earthquake has been described as a “shallow” tremor, meaning it caused a lot of shaking since it occurred not far under the surface. 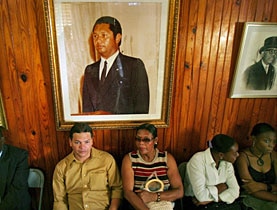 Switzerland is set to return the assets of former Haitian dictator Jean-Claude Duvalier, frozen in Swiss bank accounts, for use in development ...

Aid for stricken Haiti steps up a gear

As Haiti starts to bury hundreds killed in floods from hurricane Jeanne, Swiss aid organisations are appealing to the public to come forward with ...

Haitian photographer Daniel Morel's pictures from after the earthquake. The extent of the devastation is still unclear but there are fears ...