Born in Winterthur near Zurich in 1928, Georg Gersterexternal link studied languages before serving as the science editor of the Weltwoche news magazine from 1950 to 1956. After that he became a freelance journalist with a focus on science reporting and aerial photography.

Gerster took his first photo flight in Sudan in 1963. His work took him as far as Antarctica and appeared in National Geographic as well as in Swissair posters. His death on February 8 was officially announced on Friday.

Gerster used the alienation effect inherent in aerial photographs to inspire respect for the beauty of the planet and an understanding of the old structures and life forms that have evolved over the centuries. He aimed to document the impact of human intervention on the ecosystem.

+ Learn more about Gerster in our interview from 2005

In 2013, his “The Staff of Life” exhibition at the Swiss Foundation of Photography in Winterthur highlighted the theme of world food supply, a focal point in Gerster’s work. The photos in this gallery are from that show.

‘I see my best aerial photographs as a kick-start for flights of thought. The aerial picture is a tool of reflection. From high up, one sees not only what is, but just as well what could be – the inventory of our possibilities.’ (Georg Gerster) 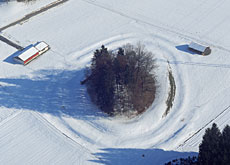 Adventures of an aerial photographer

What do you do when your aircraft is drifting away on a piranha-infested river, leaving you stranded on a sandbank? The answer: reel it back with ...

Fotomuseum Winterthur is celebrating its 25th anniversary this year by offering a peak into its history. The work of 51 artists who have ...

Is it possible to recreate an iconic photograph as a 3D model? That is the concept behind a project by artists Adrian Sonderegger and Jojakim Cortis.

A new exhibition features 140 photographs by Swiss photography legend Jakob Tuggener, all on the theme of machines and industry.