Donald Trump’s arrival in the White House has left Geneva nervous about future US policy towards the United Nations and other international organisations based in Switzerland. As clouds build, swissinfo.ch takes a look back at the United States’ closely interwoven history with ‘International Geneva’.

Recent statements by Trump and his new ambassador to the UN, Nikki Haleyexternal link, suggest that the UN and the multilateral system in general are heading for a challenging relationship with the US. Trump is a self-avowed “America First” president who seems to distrust international cooperation and disdains the global body.

Potential funding cuts are in the air and there is a possibility that the US could walk away from some multilateral treaties. On Wednesday, Erin Barclay, US deputy assistant secretary of state, told the UN Human Rights Council that the Trump administration was reviewing its participation in the UN rights body, with an eye to reform and a balanced agenda that ends the forum's "obsession with Israel".

This has led to unease in Geneva, which promotes itself as ‘a global hub for international cooperation’ and governance. Despite the rumours, Jussi Hanhimäkiexternal link, professor of international history at the Geneva Graduate Institute of International and Development Studies, says people should stay calm, adding that history offers some reliable pointers.

Daniel Warner warns that a new bill to disengage the United States from the United Nations could be very damaging for International Geneva.

“These are not unprecedented circumstances,” he said. “It’s not the first time that the US has threatened to disengage. Prior to the Obama era there was the unilateral crisis of the George W Bush years and we somehow survived. The world didn’t collapse. Then there was also trouble during the Reagan years and the US has also suspended funding in the past for organisations like UNESCO, the UN cultural agency.”

Not everyone is as Zen, however. Swiss-American political scientist Daniel Warnerexternal link is anxious about what he calls the Trump ‘tsunami’ threatening International Geneva. During these uncertain times, it is important to remind ourselves of the closely interwoven values and history between the sister republics America and Switzerland, and Geneva, he adds.

In 2011, Warner helped produce a book on this very subject, looking at influences ranging from the ‘Geneva Bible’ to philanthropists like Bill Gates and his foundation (see gallery below).

Historical ties The US and Geneva – key events and figures

The US has a closely interwoven history with the western Swiss city and one that dates back to the Pilgrims.

The Swiss city played host to key moments in their common story. Geneva’s town hall is one of the city’s oldest and most important buildings. Behind a discrete wooden door in the main courtyard is the Alabama Room. It was in this room in 1872 that a tribunal met to resolve a major dispute between US and Britain over damages caused by the Confederate ship Alabama and other British support for the southern states during the Civil War. The First Geneva Convention was also signed in this room.

“So in the heart of Geneva Old Town in the Alabama Room in the city hall we have the beginning of third party arbitration, international humanitarian law and the Geneva Conventions,” said Warner, who was former deputy director of the Graduate Institute.

These ideas and values, closely associated with Swiss neutrality, would be instrumental in helping Swiss diplomat William Rappard convince US President Woodrow Wilson to bring the League of Nationsexternal link (the forerunner of the UN) to the shores of Lake Geneva. The League moved to Geneva in October 1920, partly due to Wilson’s insistence. But the US was not one of the 41 member states present at the opening, as the Senate rejected formal US participation.

“However, during the 1920s-1930s, the US kept a mission in Geneva which had observer status and was actively engaged even though it had an officially isolationist stance,” said Hanhimäki.

US writes the cheques

The United States is the largest contributor to the United Nations, paying 22% of the $5.4 billion core UN budget and 28% of the $7.9 billion UN peacekeeping budget. It is also the biggest donor for many international organisations, such as the UN refugee agency (UNHCR), the International Committee of the Red Cross (ICRC) and the World Trade Organization (WTO), which are all based in Geneva.

The League of Nations was powerless in the face of the Second World War. But the idea of international cooperation and organisations was not dead.

“The paradox is that without the US there wouldn’t be a UN in the first place,” said the Finnish professor.

US presidents Franklin D. Roosevelt and Harry S Truman would become the leading ‘architects’ of the UN that was born out of the ruins of the war.

“America has led the international order. The system has basically been underwritten by the US,” said Hanhimäki, adding that the superpower has always been a major beneficiary of the UN but also one of its fiercest critics.

“The basic rules of the UN are very beneficial to the US. They pay more than other countries but they get a lot of influence. The US would never agree to change the Security Council P5 set-up [US, Russia, China, France and Britain] and veto rights. They are happy to keep the current status quo, as they are with Nato. With these organisations they are happy to be a vocal critic until they reach the point where they realise that if they change the funding structure it will have an inevitable impact on their influence.”

The US sees value in the UN system but International Geneva is not a major issue in Washington, said Hanhimäki. Geneva-based organisations like the UN refugee agency (UNHCR)external link and World Trade Organization (WTO)external link rarely make the headlines in the US but they remain a very successful tool, he added.

So what mark is the Trump era likely to leave on Geneva?

Hanhimäki says it is very hard to predict definite changes but one thing is certain.

“My guess is that much of his rhetoric is for domestic consumption and one shouldn’t immediately panic,” said the Graduate Institute professor.

Warner shrugs. He worries Trump will struggle with foreign policy concepts like international cooperation, neutrality and consensus, which together form the bedrock of a place like Geneva. And specialised international agencies could receive less US funding.

“The problem is that history is not big on Trump’s agenda,” he added.

Donald Trump is an anti-Obama who peddles the opposite of hope and openness, says former US ambassador to Switzerland Suzi LeVine, adding that ...

With Donald Trump headed to the White House, we examine the intersection of US-Swiss priorities.

The international city of Geneva, home to the United Nations and other organisations, is nervous after Donald Trump’s upset presidential election win.

What if the United Nations were called upon to resolve a Game of Thrones conflict? 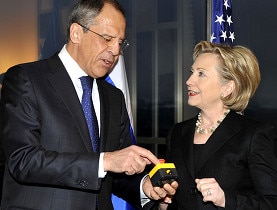 Nuclear security and weapons are the top priority for Russia and the United States, the country's two diplomacy chiefs said after meeting in Geneva.