Switzerland has launched its first-ever national campaign to mark International Literacy Day. An estimated 800,000 adults have problems with reading and writing, yet the topic generally remains taboo.

“With the ‘Simply Betterexternal link’ campaign we want to raise awareness about basic skills but we also want to target the people directly concerned,” explains Christian Maag, director of the Swiss Reading and Writing Associationexternal link, which is collaborating on the initiative with the Intercantonal Conference for Continuing Education and Training.

Despite its highly-advanced education system, 800,000 people in Switzerland have difficulties with reading and writing and around 400,000 have problems making simple calculations. The small alpine nation has a population of 8.4 million.

Literacy is largely a taboo subject and those concerned tend to hide the problem in everyday life. Most illiterate people in Switzerland have completed compulsory education but have missed numerous classes. Others have simply lost the basic skills over the years through lack of practice.

“Only 5% of those affected actively do something about the issue and sign up to courses,” Maag added.

To help sufferers overcome their fears, the association has launched a national awareness campaign which uses humorous messages on posters and flyers and in TV and radio adverts. The literacy association has also set up a hotline where people can ask questions and seek advice via the free telephone number 0800 47 47 47.

“In German-speaking regions we receive two or three calls a day. We work out what the person needs and organise courses for them. We explain how we work in small groups and encourage them to take the necessary first step,” said Susanne Leutenegger, who works on the hotline service.

Modern society is becoming increasingly demanding for people who have problems with reading and writing, she added.

“Today, practically everyone must fill in application forms and write reports or minutes,” she said, adding that employers must also be made more aware of the problem.

Further education Hotline launched for those struggling with literacy

The Dutch are the best non-native English speakers, according to a survey. The Swiss came 14th.

Student comparison PISA survey: young Swiss are the best at maths in Europe

Swiss teenagers are the best in Europe at mathematics, according to an international survey. They are also strong at science and reading. However, ... 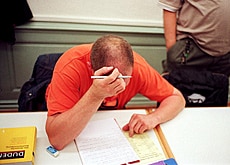 A large number of adults living in Switzerland cannot read and understand a simple text or even hold a conversation in the local language, ...