As Baghdad suffered its deadliest bombings since October, Iraq’s human rights minister said violence was likely to intensify ahead of general elections on March 7.

Speaking on a visit to the Swiss capital Bern, Widjan M. Salim said terrorists were intent on seeing democracy fail in Iraq. She said the death penalty would not be abolished in the current climate of violence.

Similar attacks in the past have been blamed on Sunni Islamist insurgents such as al Qaeda and the outlawed Baath party of executed dictator Saddam Hussein.

Iraqi Prime Minister Nuri al-Maliki described the bombings as an attempt by enemies to destabilise Iraq after parliament on Sunday ended an impasse over an election law, allowing national elections to be held next year.

There are currently two million refugees living outside Iraq, as well as 2.8 million internally displaced people. Salim indicated that it would be safer for refugees to return next year. “After the election, stability and security will be better,” she said.

Salim was joined at a media briefing in Bern by Rudolf Knoblauch, Swiss ambassador and special envoy for human rights, who said SFr21 million ($20.5 million) had been earmarked by the government for humanitarian spending in Iraq from 2008 to 2010.

“In the framework of the Paris Club, Switzerland has also forgiven SFr280 million of Iraqi debt, which amounts to 80 per cent of Iraq’s debt to Switzerland,” Knoblauch added.

The extreme level of violence in Iraq after the United States-led invasion prompted the Iraqi administration to reintroduce the death penalty in August 2004. At least 1,000 people have been sentenced to death since then.

According to Amnesty International, 900 people face imminent execution in Iraq, which has one of the highest execution rates in the world.

Salim said the death penalty might be abolished at some point but not at present. “The violence in Iraq is so high, the number of terrorist victims is so large. It’s not for me to stop it or not. I think it will not stop until another time” she said.

With a mandate to educate society about human rights, uncover the violations that happened under Saddam Hussein’s regime and monitor human rights abuses today, the Iraqi human rights ministry is a challenging portfolio by any standards.

But this former town planner and seems quietly determined to get on with her job.

“We have gone through 30 years or more of dictatorship and never heard of human rights during that time. Now with everything that we are going through, we live in a violent society ... That all is reflected in the Iraqi people.”

Salim welcomed the fact that seats in parliament have been allocated to minority groups under the new electoral law but she still has some concerns for their long-term protection within Iraqi democracy.

“We need a special law to protect minorities, we need more support and have more work to do on this issue and especially dialogue between the Iraqi people on how to accept each other,” she said.

According to a Human Rights Watch report last month, minorities in Iraq find themselves in an increasingly precarious position as the Arab-dominated central government and the Kurdistan regional government vie for control of the disputed territories.

"Iraqi Christians, Yazidis, and Shabaks have suffered extensively since 2003," Joe Stork of the non-governmental organisation said.

Salim believes that all Iraqis share a common enemy. “The minorities in Iraq face the same problem as the rest of society, namely the terrorists we have all faced as one.”

“But some terrorists have been targeting the minorities because they see they are small communities and that action on them will have a greater impact,” she added.

The human rights ministry monitors the situation of all minority groups, according to Salim.

“We also have a team who are responsible for monitoring prisons and detention, a team working on women’s issues, and others on children’s issues, displaced persons’ issues and also for the victims of terrorists.”

Salim was reluctant to comment on the recent Swiss vote to ban the construction of minarets, a decision which has sparked angry reaction in many Muslim countries.

Baghdad alone has dozens of visible churches of various Christian denominations but Salim made the distinction between the freedom to practice religion and the freedom to display religious symbols.

“I think people have the right to pray, to go to a mosque or a church and I don’t think Switzerland has prevented anyone from doing that,” she said.

Salim was appointed human rights minister of Iraq in May 2006. At the time, she was among four women named to the Cabinet in Iraq’s new, non-sectarian government and the only Christian.

Her background is in urban planning.

She began her governmental career in May 2003 as a member of the Wahda Neighborhood Advisory Council, soon joining the Karadha District Council as well. Salim became a member of the Baghdad provincial council in February 2004.

In recent years the Swiss foreign ministry has concentrated on human rights training for the Iraqi administration.

“Part of training was to teach the officials how to carry out state reporting. That was something completely new to the Iraqi government. They had never had to answer the questions of a UN special rapporteur, for example,” Simon Ammann , deputy head of the human rights policy section, told swissinfo.ch.

The Swiss also organised study tours with the focus on federalism earlier this year and in 2009, financed by the World Bank.

Violence in Iraq has fallen sharply in the past two years.

November's monthly civilian death toll of 88 was the lowest since the 2003 US invasion.

Tuesday's attacks were the worst in Baghdad since October 25 when two truck bombs killed 155 people at the Justice Ministry and the Baghdad governor's offices.

In August, 95 people were killed when the Finance and Foreign Ministries were targeted. 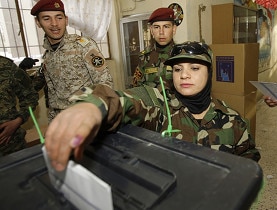 Saturday's provincial election in Iraq, which may redraw the country's political map, is a crucial test of Iraq's tenuous stability, say Swiss ... 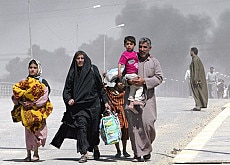 The Swiss government has decided against receiving further refugees from Iraq, contrary to the wishes of the Geneva-based UN refugee agency (UNHCR). 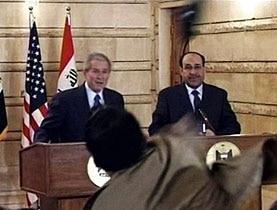 The Iraqi journalist who pitched his shoes at former United States President George W. Bush is in Geneva setting up a foundation to help Iraqi war ...