Switzerland is renowned as the home of many global sporting associations, including Fifa, Uefa and the International Olympic Committee. Such bodies are granted tax breaks and flexible legal terms that allow them to govern their own affairs.

The attraction of playing host to an array of some 50 international sporting governing bodies is clear. Switzerland enjoys the prestige of having such a glittering array of guests on its doorstep, a fact that enhances the country’s reputation for neutrality and tolerance.

But the latest scandal to engulf Fifa has raised questions about how to regulate the activities of such bodies that control the fortunes of so many multi-billion-franc sports.

Fifa stands accused by the British Sunday Times newspaper of certain members paying and receiving huge bribes to secure votes for the privilege of hosting of the World Cup.

Such an activity by Fifa officials would not break Swiss anti-corruption laws because non-profit sporting entities are exempt from such legislation – last updated in 2006. Anti-corruption watchdog group Transparency International has long criticised the exemption.

“This is a big mistake,” Anne Schwöbel, director of Transparency International’s Swiss branch, told swissinfo.ch. “The government decided that these bodies are non-commercial, but there are huge financial interests behind sport.”

“Switzerland benefits from the fact that it has a lot of sporting organisations because they bring prestige. These bodies are in the comfortable situation of knowing that if they have internal malpractices then they do not have to fear an external investigation.”

The Swiss justice ministry told swissinfo.ch that there were no plans to change the exemption of sporting associations from anti-corruption laws.

“It is very simple to create an association, we have very few mandatory rules,” he told swissinfo.ch. “Associations are given a lot of freedom to govern themselves.”

The only possible legal proceedings that Zen-Ruffinen can see coming out of the current Fifa affair is a banned member or member state complaining to the civil courts. A national football association that loses out on hosting the 2018 or 2022 World Cups could also sue Fifa for any legitimate expenditure on its bid, if the voting procedure is proved to have been corrupt.

Fifa has been involved in one recent criminal investigation in Switzerland that focused on its bankrupt commercial marketing partner ISMM-ISL. Legal proceedings in canton Zug uncovered a series of kickbacks worth SFr138 million ($143 million), some connected to Fifa.

But the proceedings, which took place between 2005 and June of this year, were settled with compensation payments from the accused parties without an admission of guilt.

With diminishing confidence in sporting associations, courts of law and politicians to sort out corruption in sport, some observers are calling for an independent international organisation to be formed – along the lines of the World Anti-Doping Agency (Wada).

But Fifa says it is determined to restore confidence by launching its own internal investigation into bribery claims.

Sulser said the decision was taken to “protect the integrity” of the bidding process for the 2018 and 2022 World Cups.

The investigation, which is due to publish its findings in mid-November, is also probing the suspicious behaviour of certain unnamed bidding countries. A decision on which countries will host the 2018 and 2022 World Cups will be made on December 2.

Fifa President Joseph “Sepp” Blatter told reporters on Wednesday that the “devils” to be found in society could also be found in football. But he insisted that the investigation would “bring back credibility”.

“Trust us and you will see [that] confidence will be restored,” he said.

How the scandal evolved

The alleged bribery scandal that has enveloped Fifa revolves around the bidding process for the 2018 and 2022 World Cups.

An article in the British Sunday Times on October 17 alleged that two top Fifa executives – Nigerian Amos Adamu and Tahitian Reynald Temarii – had offered to sell their votes to undercover reporters, who were secretly filming the meetings.

Fifa announced an immediate inquiry to be headed by its ethics commission – an independent judicial body set up in 2006 to enforce Fifa’s code of ethics and oversee the bidding process for hosting World Cups.

On October 18, the investigation was widened to look into the conduct of other Fifa officials. It also promised to probe rumours of collusions between member associations relating to the bidding process.

On October 20, Fifa’s ethics commission announced that it had provisionally suspended the two executives named in the Sunday Times report plus four other officials.

A full report will be submitted after the investigation is complete in mid-November.

Fifa executive members will meet in Zurich on December 2 to decide by secret ballot which countries will host the 2018 and 2022 World Cups.

The International Federation of Association Football was created in Paris in 1904 and moved into permanent headquarters in Zurich in 1932.

Swiss national Joseph “Sepp” Blatter joined Fifa in 1975, first as Technical Director and then as General Secretary. In 1998 he was voted in as the federation’s 8th president.

Blatter was re-elected as president in 2002 and 2007. The post is up for election in 2011 and Blatter has indicated that he will stand again.

Fifa has not been far away from accusations of corruption in recent years. Blatter’s election in 2002 was surrounded by rumours of bribery. The same year, General Secretary Michel Zen-Ruffinen was sacked after alleging financial mismanagement.

The book was followed up by similar allegations in a BBC Panorama documentary. 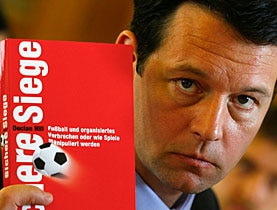 Contrary to what Fifa says, it is highly likely that some World Cup football matches in South Africa will be fixed, says investigative journalist ... 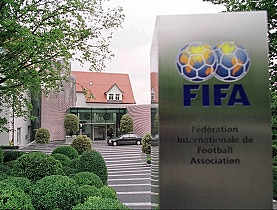 Six executives of a former marketing agency employed by the world football governing body Fifa have gone on trial in Zug charged with fraud and ...

Records are constantly being broken in sport but Switzerland’s claim to fame is unique: it is home to more international sport bodies than ...

Football around the world

It's not called the world game for nothing. Football: a game where two 11-member teams try to push a ball into the opposing team's goal, using ...