On September 25-26, 1942, the annual conference of cantonal immigration directors took place in Montreux. On the agenda was Switzerland’s policy towards the growing number of refugees trying to enter the country, specifically Jewish people fleeing the Nazis.

Archive documents from 75 years ago make uncomfortable reading and show how the government’s policy of turning away desperate Jews at the Swiss border was controversial at the time and far from accepted by the rest of the country.

“Here, as elsewhere, it is undesirable for the Jewish population to exceed a certain proportion. Switzerland does not intend to let itself be led by the Jew, any more than it would like to be led by any foreigner … The Jew is not easily assimilated … Nor must one forget that many of them pose a danger to our institutions, being used to conditions in which the Jewish instinct for business has a tendency to run free.”

That was Heinrich Rothmund, head of the Federal Immigration Office between 1919 and 1955, speaking in Montreux. The full minutes of his speech on September 26 start at the bottom of page 19 of this document, in French, taken from the Diplomatic Documents of Switzerlandexternal link:

These comments reflect a letter written to Rothmund ten days earlier by Daniel Odier, a military police officer of the Territorial District of Geneva. The letter was quoted in “Switzerland and Refugees in the Nazi Eraexternal link”, written by an independent commission of experts led by Jean-François Bergier.

“Many Jews newly arrived in Switzerland wish to start up businesses immediately and also want to engage in trade. These people’s correspondence clearly shows that they tell their friends and acquaintances to come join them in this paradise that is Switzerland, and the mere fact of accepting one in Switzerland gives ten others the chance to follow him here and get so settled in that we will have a lot of trouble getting rid of them. … These refugees have little discipline and often need to be dealt with very firmly if they are to respect the promises they made when they entered Switzerland.”

WWII The flight to Switzerland

Six weeks earlier, on August 13, the government had effectively closed the border to Jews. “Political refugees, that is, foreigners who declare themselves as such when first questioned and can also provide proof, are not to be expelled. Those who seek refuge on racial grounds, as for example, Jews, are not considered political refugees,” it decreed.

According to the Bergier report, “there is proof that about 24,500 refugees were turned away at the border between January 1940 and May 1945”, although recent research claims the figure is a lot lower. In addition, it notes that “it was widely known after the summer of 1942 at the latest, that refugees who had been turned away would almost certainly be deported and killed”.

The decision on August 13 triggered protests among the public, some politicians on the left, relief agencies and religious groups of all denominations. On August 30, Justice Minister Eduard von Steiger delivered his "boat is full" speech to the protestant Young Church of Zurich-Oerlikon – the first time this metaphor had been used regarding refugees.

“Whoever commands a small life boat that is already quite full, of limited capacity, and with an equally limited amount of provisions, while thousands of victims of a sunken ship scream to be saved, must appear hard when he cannot take everyone. And yet he is still humane when he warns early against false hope and tries to save at least those he had taken in,” he said.

On September 7, a class of girls from a secondary school in Rorschach, northeastern Switzerland, wrote to the government “utterly outraged” that refugees were being sent back “so heartlessly into misery”. They called for a more generous and welcoming attitude on the part of Switzerland:

A week later, another young disappointed Swiss girl who had written to the government received a four-page response, annotated by justice minister Eduard von Steiger.

“When your anger has passed, you might be patient enough for a moment – young people are seldom patient – to think about something,” he wrote somewhat patronisingly. He then asked a dozen or so “did you know?” questions, for example did she know how many refugees Switzerland had in fact taken in and did she know how many of these had turned out to be spies. “Did someone tell you that or did they keep that information from you?”

Von Steiger concluded: “I’m convinced that your accusations would make you blush if you were better informed about the difficulties connected to the refugee situation and the efforts of those working with devotion and love for refugees.”

At the conference on September 26, Rothmund, seemingly in denial, defended the decision to close the Swiss border to Jewish refugees.

“The Swiss people have protested vigorously against these measures – less out of sympathy for the Jews, more because they condemn their persecutors. These reactions are healthy because they show that our country has resisted, until now, the virus of anti-Semitism.”

A major source of news for Swiss expats during the Second World War was the Short Wave Serviceexternal link (SWS), a precursor of swissinfo.ch. Nevertheless, as the SWS archives show, the current affairs dispatch for the following week – the transcript of a radio programme – made no mention of how Switzerland was dealing with Jewish refugees, focusing instead on international news and the Battle of Stalingrad:

Swiss at war Coming to terms with a tarnished wartime record

In March 2002, the Bergier commission presented the Swiss government with its final report examining Second World War relations between ...

Wartime Switzerland closed its borders to Jews. Albanian Muslims chose to save them. These heroes, captured on camera and now on show, should ...

By Isobel Leybold-Johnson in Lucerne

Two views Looking back at the Holocaust assets controversy

Fifteen years ago Swiss banks reached a settlement in a US lawsuit over money belonging to Holocaust survivors and heirs. Today, two diplomats ...

Holocaust How a Polish envoy to Bern saved hundreds of Jews

Aleksander Ładoś saved hundreds of Jews from the Holocaust with help from Jewish associations active in Switzerland and the United States.

By Zbigniew Parafianowicz and Michal Potocki

A Swiss diplomat credited with helping more than 60,000 Jews escape the Holocaust in German-occupied Hungary is the subject of a special ... 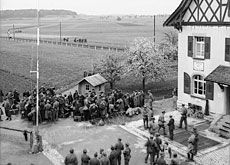 Pardons for refugee helpers to continue

Switzerland has rehabilitated over 100 people condemned for helping victims of Nazi persecution enter the country during the Second World War. ...

The Swiss and French who defied the Nazis by smuggling weapons, microfilm and Jews finally have a memorial in their honour.

On the airwaves Wartime radio archives come to light

During the Second World War, Switzerland’s fledgling short wave radio service was essential to its attempts to communicate its policies and ...

Jean-François Bergier, the historian who chaired the expert commission which investigated Switzerland's role in the Second World War, has died. ...