Rethinking global cooperation and business values will be at the heart of talks at the 40th World Economic Forum (WEF) meeting in Davos next week, say WEF executives.

The annual five-day brainstorming, which opens on January 27 in the eastern Swiss mountain resort, is due to attract 2,500 participants from more than 90 countries. Haiti and global warming will also be top agenda items.

World leaders and business figures will be meeting under the motto “Improve the State of the World: Rethink, Redesign, Rebuild” to take stock in the aftermath of the deepest recession since the Great Depression of the 1930s.

As a consequence of governments’ fiscal situations public and private households will have been squeezed and unemployment figures will have increased, he added.

“We have to rethink our values – we are living together in a global society with many cultures. We have to redesign our processes – how we deal with the issues and challenges on the global agenda. And finally, we have to rebuild our institutions,” said the WEF executive chairman.

On Monday WEF published the results of a Facebook survey in which two-thirds of the 140,000 respondents said the current economic crisis was also a “crisis of ethics and values”.

“The general public is increasingly distrustful of leaders from any kind of organisation,” Schwab told swissinfo.ch. “Something is fundamentally wrong; we want to confront leaders with this issue.”

The Davos meeting will be the first big global gathering of leaders since the failed Copenhagen climate talks in December.

“We have to look at the Davos meeting in the context of what’s happening in the world... and we see that, clearly, the present system of global cooperation is not working sufficiently,” said Schwab.

“Global multi-stakeholder cooperation lies at the heart of the forum’s mission to improve the state of the world.”

Cooperation and assistance from business leaders to reconstruct Haiti, which was devastated by a 7.0-magnitude earthquake last week, will also be a major point of discussion in Davos.

“It will be about encouraging the business community to invest in the island, partnerships with Haitian organisations and creating a network to encourage long-term sustainable growth to help the population out of poverty,” said chief business officer Robert Greenhill.

In all, 30 heads of state and government will attend, as well as over 60 senior ministers, 1,400 top executives from the world’s leading companies, 100 officials from international organisations, as well as 200 academics and media leaders.

There will also be sessions with South Korean President Lee Myung-Bak and Canadian Prime Minister Stephen Harper, who respectively chair this year's G20 and G8 summits. And the meeting will also discuss climate change with Mexican President Felipe Calderon, who will chair the follow-up climate summit later this year.

Another session will look at the uneven and often sluggish pace of reform of financial regulation, with European Central Bank President Jean-Claude Trichet.

But many US bankers are avoiding Davos for the second successive year in a sign they remain wary of being seen there at a time when they are still being attacked for their role in the financial crisis and over huge bonuses.

The World Economic Forum started life as the European Management Forum in 1971.

Formed by German-born businessman Professor Klaus Schwab, it was designed to connect European business leaders to their counterparts in the US to find ways of boosting connections and solving problems.

It is a non-profit organisation with headquarters in Geneva and is funded by member subscription fees.

The forum took its current name in 1987 as it broadened its horizons to provide a platform for finding solutions to international disputes.

WEF conducts global and country specific reports and other research for its members. It also hosts a number of annual meetings – the flagship being Davos.

Davos has attracted a number of big names in the world of business, academia, politics and show business. These include: Nelson Mandela, Bono, Bill Gates and Sharon Stone.

As the forum grew in size and status in the 1990s, it attracted rising criticism from anti-globalisation groups, complaining of elitism and self-interest among participants.

The 2010 WEF in Davos will be held from January 27 to 31. A small protest is scheduled in Davos itself on January 28.

In its annual report on global risks, published on January 14, the WEF warned that a fully-fledged sovereign debt crisis, an asset price collapse and a slowdown in Chinese economic growth were among the biggest threats facing the world this year and beyond.

The report said: "Many countries are at risk of overextending unsustainable levels of debt, which in turn will extend strong upwards pressures on real interest rates. In the final instance, unsustainable debt levels could lead to a full-fledged sovereign debt crisis."

A slowdown in China could lead to serious unemployment and social unrest, and badly hit the country’s trading partners, as well as global commodity and capital markets, the WEF warned.

One week after the devastating earthquake crippled Haiti, it is still proving difficult to translate international goodwill into practical help. ... 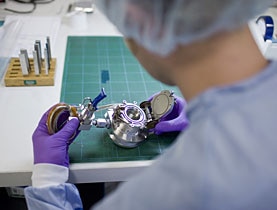 Switzerland has climbed from second to first position in the World Economic Forum's global competitiveness report 2009-2010, replacing the United ... 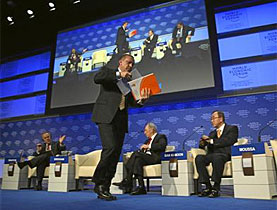 Can WEF help save the world from ruin?

As business leaders and politicians pack their bags to exit the World Economic Forum, they leave behind the burning question: what has the annual ...

Looking back Davos through the years

Security, pomp and platitudes. The World Economic Forum was founded in 1971 by Klaus Schwab, a business professor in Switzerland. Beyond ...