Bern announced on Tuesday that it had lifted a visa ban on President Thein Sein and 86 other Myanmar officials. The changes, dated March 30, came into effect on April 3.

A spokeswoman with the economics ministry said funds belonging to these officials in Switzerland would remain frozen. Economic sanctions, including against 39 firms in military hands, remain in place.

The European Union eased its travel restrictions in February but has yet to lift economic sanctions. The European Commission hinted on Monday that the bloc’s foreign ministers could begin lifting sanctions when they meet in three weeks.

"We do expect the foreign ministers will recognise the changes and there will be a positive signal from the Council," EU foreign affairs spokeswoman Maja Kocijancic told a regular daily news briefing.

Elections judged free and fair were seen as one of the final steps required for the West to ease sanctions.

“It is vital to support the people who intend to reform the country,” the former International Committee of the Red Cross delegate told swissinfo.ch.

“Lifting sanctions is a first step that lends weight and credibility to the reformers in opposing the government hawks. Once that has happened, western governments should keep up the pressure for improvements, for example in the area of human rights.”

Myanmar has been set on a course of change since March 30, 2011, when military leaders formally handed power to the “civilianised” government led by Thein Sein.

In January, hundreds of political prisoners were released and a ceasefire was signed with the Karen National Union, fuelling hopes for an end to the group’s 60-year armed resistance.

On April 1, by-elections were held to fill parliamentary seats left vacant by the appointment of ministers. Suu Kyi’s National League for Democracy (NLD) took part in the process, competing in elections for the first time since 1990.

The result was a landslide for the NLD, which took 40 of the 45 seats being contested, Myanmar’s election commission announced.

De Riedmatten says the changes which have taken place in the past eight months would have been unthinkable even a year ago.

“I would never have imagined that Aung San Suu Kyi’s party would have won all the seats it contested. It’s a dream come true, even if we shouldn’t yield to euphoria,” he said.

The former mediator said that with her election to parliament, Suu Kyi was entering the political system. The authorities and the parliamentary majority would have to be prepared to cooperate with her over her reform programme.

“If those who hold power and those who want to keep military rule consider her a danger, her position could become difficult,” de Riedmatten said.

“The risk is she takes on a political function but is not able to contribute to the development of the country and the necessary political reform. And that would damage her credibility.”

The future role of the military was the decisive factor, he said. If the army refused to fall in behind the reformers, no progress would be possible.

“On paper, the positions of the military and Aung San Suu Kyi are irreconcilable: the big question is who will get the upper hand between now and the 2015 parliamentary elections.”

Myanmar, formerly Burma, has been under military rule since 1962.

The country has faced political and economic isolation since the military refused to recognise the results of a democratic election in 1990, won by the pro-democracy National League for Democracy of Nobel laureate Aung San Suu Kyi.

Neighbouring China is its biggest political and economic ally and has capitalised on the West's reluctance to trade with the junta. It relies heavily on Myanmar for its energy needs and backs the regime in the international arena.


(With input from Luigi Jorio), swissinfo.ch

Just a day after her release, pro-democracy leader Aung San Suu Kyi is already encouraging people to stand up for their rights in Myanmar. On ...

Foreign observers and analysts have no illusions that the first elections to be held in Myanmar since 1990 will be democratic. According to the ... 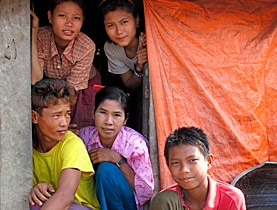 Hope flies in to cyclone-hit Myanmar

Birds – and hope – are slowly returning to southwestern Myanmar, one year after it was devastated by Cyclone Nargis, Caroline Morel from Swissaid ...

A photographic journey across the country. Myanmar is not just a country of generals and human rights violations. It is above all the home of ...