The lynx, which was reintroduced to the Swiss Alps in the 1970s, is flourishing better in Switzerland than in any of its neighbouring countries.

Other alpine nations such as Austria, Italy and France have also made attempts to reintroduce animal, but with less success.

The decline of the lynx in western Europe occurred in the 19th century, when the habitat of its natural prey, roe deer, was destroyed by farmers clearing forest for agriculture.

The few remaining lynx were finally hunted to extinction, after they began killing livestock for food.

Last year the Council of Europe approved a conservation strategy for the lynx in the Alps, but the species is still regarded with suspicion by rural farming communities.

Although the lynx, which is a member of the big cat family, is a protected species in Switzerland, animals are killed every year by hunters who claim they prey on sheep.

This week, representatives from all the alpine countries have been meeting in the town of Amden, canton St Gallen, to discuss ways of monitoring and managing the lynx population.

Urs Breitenmoser, head of the University of Bern's coordinated research project for the conservation and management of carnivores (KORA), says an important aspect of the conference will be to discuss ways in which the lynx can coexist with farming communities.

"Although the lynx has broad acceptance among the general population, there is still local disagreement," Breitenmoser told swissinfo.

"We don't want a fight with the hunters and sheep farmers, we want to involve them in the process and come to a plan for coexistence.

Switzerland's lynx population now numbers over 100, while neighbouring Austria has only a handful of the animals.

But even in Switzerland, where the lynx is doing best, there are potential problems.

Anja Molinari, head of the Scalp project (Status and Conservation of the Alpine Lynx Population), has already spotted possible trouble ahead.

"We may have genetic problems," Molinari told swissinfo. "Because the lynx population is still relatively small, there is interbreeding that is causing a reduction of the gene pool."

"But we need to do more analysis before we can be sure that it really is a problem. It may not matter at all."

What Molinari and Moser are both hoping for is that all the other alpine countries will adopt a similar lynx monitoring and management system to the one already in place in Switzerland.

That would encourage the growth and spread of the lynx right across the Alps.

"What I would like to achieve is a monitoring system in every alpine country," said Molinari."

"And I would like a consensus between conservationists and hunters so that the lynx can spread all over the Alps."

The alpine lynx was hunted to extinction in the late 19th century.
Today, after reintroduction in the 1970s, there are around 100 lynx in Switzerland.
Neighbouring Austria has only a few lynx; Liechtenstein and Germany have none.
Rural communities remain suspicious of the lynx, which is a carnivore and preys on deer.

Activists fight to protect the wolf

Environmental groups are calling on the Swiss government to retain the ban on hunting wolves. The World Wide Fund for Nature and Pro Natura warn ... 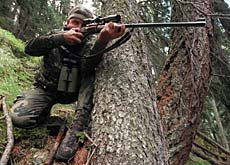 As the hunting season gets under way, animal rights groups are calling for tougher measures to protect wild animals. Groups are also calling for ...

Animal rights get a boost

Swiss law now recognises pets as living beings rather than as objects, granting them an improved status. The revised legislation that came ...