A Zurich zoo conservation project that helps to both preserve rainforests in Madagascar and provide locals with better living conditions has been hailed a success.

Ten years after starting its work at the African island state, the zoo has helped convert many farmers to conservation ideas. And four years ago it created its own replica rainforest in Zurich.

The zoo invests $100,000 (SFr118,000) a year on a number of projects in Madagascar to provide park wardens and infrastructure in the national park and improve rice farming methods, irrigation and drinking water supplies for surrounding villagers.

Four years ago the zoo created its own Madagascan rainforest biosphere in Zurich – called Masoala – to aid research of the ecosystem and to keep a stock of flora and fauna that may need reintroducing to their natural habitat in future.

It was then that the zoo joined forces with the Wildlife Conservation Society to safeguard the newly formed Masoala national park in Madagascar.

Rochel Rakotonarivo, deputy Malagasy consul to Switzerland, told swissinfo that the zoo's efforts have been vital in the battle to conserve Madagascar's largest national park – situated on a peninsula in the northeast of the country - from destruction by farmers.

Madagascar has some of the world's most pristine rainforests that are home to some species only indigenous to the country, such as the unique lemur primates. It also boasts numerous orchid species and is abundant with amphibians, reptiles, insects and birdlife.

"With the Zurich zoo project we can save the situation before the region is exploited and destroyed by man," he said on Wednesday.

"The development [of the park] has to go hand in hand with nature preservation education because people don't always understand why animals and flora get preference sometimes.

"For us, the government and the zoo, this involves working to improve the financial situation of households and generating revenue for families."

Much of Madagascar's rainforest has been cut down by farmers who need more space to grow rice as the population increases.

Much effort has also been put into diversifying farming methods, for example, honey and vanilla production. Zoo staff have also spent time teaching locals about the importance of the rainforest, and plan to open an information centre complete with schoolroom in the next few months.

"To conserve the last great rainforest on this peninsula it was really important to work with the people in the villages," Rübel told swissinfo.

"We provided education to make them proud of what they have in their backyard. For them the forest was just a place they could cut down for more space to grow rice.

"Sometimes they only realised that when the forest was gone. We tried to give the forest another quality so that they understand that it is very important for them."

Madagascar is 14 times the size of Switzerland.

It is the fourth largest island in the world and has a population of 15 million.

Only four per cent of the original rain forests of Madagascar are still completely intact.

Masoala is the largest national park in Madagascar, encompassing 840 square miles, and was created on October 18, 1997. It contains 1% of the total world's biodiversity.

The Masoala rainforest at Zurich zoo cost SFr52 million ($44 million) to build and has a floor space of 11,000 square metres and a volume of 200,000 cubic metres.
It houses thousands of plants and 50 different animal species – around 300 individual animals in total.
The temperature inside the biosphere varies between 20 and 30 degrees Celsius to reflect winter and summer seasons and the air has 80% humidity.
A system of pipes throughout the hall sprinkles around 6 millimetres of "rainfall" on a daily basis.

Zurich’s zoo is celebrating its 75th anniversary with a series of special events to raise funds for new projects, including the construction of a ... 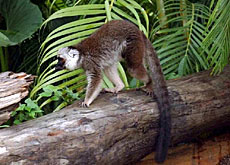 Building a Madagascan rainforest at Zurich zoo has posed huge technical and logistical challenges. But the SFr52 million project has also cast a ...