Switzerland’s Federation of Small- and Medium-Sized Enterprises (SMEs) supports a proposal to do away with mandatory licence fees for public service broadcasters, which will come to a nationwide vote on March 4. Two of its members sat down to discuss the issue.

The SME umbrella organisationexternal link is up against an alliance of most political parties, parliament, the government, trade unions and most sectors of the business community, who recommend voting against the initiative. But it is a political force to be reckoned with, representing about 300,000 companies grouped in 250 trade associations.

The federation spearheaded a campaign to try to scupper a reform of the public radio and television funding system in 2015. It has also been at the forefront of political efforts to abolish public broadcast licenceexternal link fees, but not all of its members toe the line.

Jürg Schär, who made a name for himself as a e-bike pioneer, is a chairman of several SMEs outside Bern. Konrad Rüegg, a former owner of a travel agency outside Zurich, is now renting out apartments. Both are members of the Federation of SMEs, but Rüegg says he will vote in favour of the initiative, while Schär is opposed. They shared their reasons in a discussion with swissinfo.ch.

swissinfo.ch: Do you use the services of the Swiss Broadcasting Corporation (SBC)?

Konrad Rüegg: I have to pay the licence fee and therefore I use some of the content on offer, particularly news and sport. The SBCexternal link offers good products in principle…

K.R.: No, the only thing I want to scrap is the mandatory licence fee. The SBC could survive without it.

swissinfo.ch: How much would you have to pay if you still owned your travel agency?

Inevitably, small companies in the travel business have turnovers beyond this level.

swissinfo.ch: Every company has devices (such as TVs, radios and computers) which allow for the consumption of SBC programming.

Jürg Schär: [Yet] I agree that it’s not nice to impose such a levy on companies. Let me give you an example. A friend of mine runs a company in this part of the country with more than 100 employees. He owes about CHF130,000 in SBC licence fees even though he has banned the use of radio and television during work hours.

I’m afraid this flaw encourages citizens to approve the initiative.

swissinfo.ch: Is it therefore right to abolish licence fees for public radio and television altogether?

J.S.: I think it is wrong to take drastic measures. Also because the SBC programmes are not the only ones to benefit from licence fees but also more than 30 private local and regional radio and television stations.

swissinfo.ch: My fee as an individual consumer will soon drop to CHF1 a day. Is this too much?

K.R.: Switzerland has the highest public service fees in Europe. The annual CHF365 may be a fair price for the service provided. But it must be possible to get the funds from elsewhere, without a mandatory fee.

swissinfo.ch: Mandatory fees are presumably not a welcome method for a liberal-minded entrepreneur like you, Mr. Schär?

J.S.: If the principle of this initiative were applied in strict terms, you could launch an initiative calling for education-related tax for those who don’t have children, [for example].

The radio and television licence fee is a de facto tax. It might be simpler if it were added to the tax bill.

swissinfo.ch: Do you agree that the fee is too high?

J.S.: In comparison, Switzerland has high radio and television fees. But my income and the salaries of my employees are also higher than in Portugal or in northern Germany.

swissinfo.ch: One of the key arguments brought forward by opponents of the initiative is that the SBC guarantees interest-free and reliable information, both essential for Switzerland’s system of direct democracy. Do you agree?

K.R.: Independent reporting will continue to be guaranteed. There are no quality norms in journalism…

swissinfo.ch: …. the SBC media must adhere to strict journalistic principles….

K.R.: …. this is also true for private media. What counts are the contents. If they are balanced and of interest to a majority of the audience, there will be enough demand and the SBC can continue to generate revenue from advertising.

The opponents of the initiative want us to believe that only populist radio and television programmes would be feasible if it is accepted. This is nonsense.

J.S.: Small private media organisations can generate income from advertising under current rules. I’ve often bought advertisement or sponsored programmes in the past. Regional television or radio are more suited as advertisement platforms than SBC outlets.

It is already a largely a free market and I doubt whether this initiative will bring great new opportunities for small media providers.

There is also the question of who will take over a broadcasting licence, to be given to the highest bidder. Will this inevitably lead to television programmes like under Berlusconi in Italy? Will some right-leaning billionaire buy up broadcasting rights and use them to influence politics?

swissinfo.ch: The SBC has an official mandate to provide all of Switzerland’s four language regions with a comparable information offer. Do you take these linguistic minorities into account?

K.R.: Certainly, it is worth cultivating. But it is a matter of costs. The SBC in the Italian-speaking part of Switzerland has about 1,100 fulltime jobs. This is stifling every private competitor.

J.S.: I have no reservations about contributing to pay a relatively high price for a comparable information offer for the language minorities. A country made up of German, French, Italian and Romansh speakers – which I hope will always be the case – depends on the spirit of solidarity.

On March 4, the Swiss will vote on getting rid of the compulsory radio and television licence fee. What are the arguments and what is at stake?

Opinion ‘Would you still vote no if you had to pay?’

People's Party parliamentarian Claudio Zanetti says that when it comes to No Billag, those who don't pay shouldn't have a say, including Swiss abroad.

Opinion ‘No Billag is an attack against Switzerland’

For social democrat Tim Guldimann, the 'No Billag' initiative is a full-on attack on objective and balanced reporting.

On March 4, the Swiss will vote on getting rid of the compulsory radio and television licence fee. What are the arguments and what is at stake?

Communications Minister Doris Leuthard has made a strong case for media diversity in Switzerland to bolster the country’s democracy. In a ... 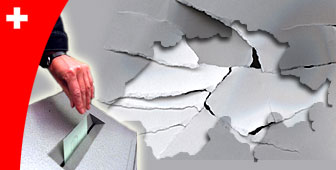 In one of the closest votes for several years, the people of Switzerland narrowly approved reforms which will change the future role of the army.