On Wednesday, the House of Representatives followed the Senate in agreeing to Economics Minister Johann Schneider-Ammann’s spending recommendation as part of one of the 10 supplements it accepted for the 2017 budget – enough to cover what’s needed to sell off nine cargo ships and four tankers.

A total of 119 parliamentarians voted in favour of the additional money but 65 were against. Though none among the 46 senators voiced any objections, none expressed any enthusiasm, either.

"We have a choice between yes and yes," said Christian Levrat, president of the left-wing Social Democrat Party.

The reason that the Senate felt it had no choice but to approve the spending has to do with economics.

Earlier in May, the cabinet informed the parliament about the potential loss resulting from guarantees issued for the 13 ships. “Deep-sea shipping is suffering a major crisis worldwide,” the cabinet said in a statement, adding that it had been trying to “minimise losses” to the country since mid-2015.

Today, 49 cargo ships ply the waters under the Swiss flag. Over the past decade or so, however, these vessels have no longer carried full loads, since the shipping sector is over capacity. The situation has become so bad that Switzerland has to sell the 13 ships.

The cabinet said it had signed binding sales contracts for the 12 ships and found a potential solution for off-loading the 13th vessel. The sales would be completed within three months, it said, and further details including the identity of the purchasers could not be provided.

As the Swiss commercial fleet celebrates three-quarters of a century, dark clouds gather on the horizon.

Pride of the seas

These types of bonds also are a relic of the past. Since 1959, Switzerland has granted financial guarantees to Swiss shipping companies, which can then obtain credits at favourable rates. In return, Switzerland has the right to requisition their ships in times of crisis, in order to ensure supplies for the country.

Thanks to this system, Swiss shipping companies have gained the best possible support and been able to sail well-maintained ships. These proud vessels were a flagship for Switzerland and the Swiss people who, despite being landlocked, admire the professionalism of this exotic branch. But there was no question of its economic utility, for it has never been of importance.

But today, the administration, parliamentarians and taxpayers are rubbing their eyes. How is it possible that the accountants from the federal office for keeping the country supplied, who are usually so scrupulous, did not see this multimillion-franc disaster looming?

"The amount is huge and each million hurts. We certainly did not do the optimal checks. We have assumed that we had this in hand but were wrong," Economics Minister Johann Schneider-Ammann said regretfully on German-speaking Swiss public radio, SRF.

Out of control system

So it was not just the crisis in the maritime sector that dug a hole in the federal finances. Part of the problem comes from within. The money was too generously handed out and the controls too lax.

It was not until 2016 that the highest auditing body filed a criminal complaint. The complaint was directed against a ship owner on federal bail and a federal official. The financial controllers accused the ship owner of overvaluing the price of a ship to get a higher bond. At the same time, an official had allowed a ship owner to end reimbursements. An administrative investigation then brought the case to light. Until now, however, the accused persons have succeeded in blocking the report from being published.

But the government has already learned from the case. It no longer wants to continue the bonding system. However, the government guarantees still cover some 40 ships; CHF500 million are destined to disappear, but without any lifeboat on the ship.

Ahoy! Flying the Swiss flag on the high seas

It might seem strange for a landlocked country to have a merchant navy, but the 41 commercial ships sailing under the Swiss flag represent a vital ...

With 90 per cent of international trade transported by sea, landlocked Switzerland has grown into the world’s second biggest shipping power and ... 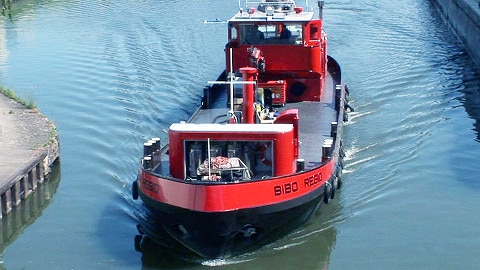 Goods continue to flow through the Port of Switzerland. Switzerland's key export sector has been hit hard by the economic crisis. And the ...