Their fat faces grace postcards, and their fat is used in salves. In Switzerland, the marmot is part mascot, part medicine chest – and for game lovers, a meal.

A member of the squirrel family, alpine marmots have powerful paws and strong claws to help them dig their burrows in mountainous areas. They live in groups of up to 20 animals, and juveniles stay with their parents and siblings until ready to breed at about three years old. The tubby little guys double their weight in preparation for hibernation, which lasts from early October until mid-April.

In addition to its wild marmot populations in the Alps and the Jura region, Switzerland has a number of captive marmot clans that can be seen in parks near mountain railway stations.

Hikers are apt to hear marmots before they see them. The watchful rodents make shrill whistling noises to warn their friends of potential danger. A long whistle means an aerial predator, like an eagle. A series of short whistles indicates earth-bound predators, such as foxes.

A current exhibition at the Swiss National Museum names the marmot as one of Switzerland’s four most iconic animals. And while it documents the case of a marmot kept as a pet, it also displays examples of medicinal products made from marmot fat. Commonly sold at Swiss pharmacies, these salves and oils are used to relieve pain, swelling and rashes.

“So sweet!”, coo the tourists. “Shoot them,” say the authorities in Zermatt, where marmots have become a plague.

By swissinfo.ch and Radio SRF

Marmots also appear on the menus of restaurants serving more common game options, like venison. Indeed, every September and October, game keepers hunt down thousands of marmots to control their Swiss population. Like foxes, deer and chamois, marmots are fair game.

For example, there are too many marmots in Zermatt at the moment. Farmers complain that they dig too many holes in pastures, creating a nuisance and a hazard. Zermatt Tourismexternal link acknowledges the conflict, but also celebrates the presence of some 1,000 marmots living near the Matterhorn village.

According to the Swiss newspaper Blick, marmot tastes like rabbit. Here’s the newspaper’s recipe for marmot ragout.

Preparation: Sauté the marmot pieces, and drain the fat. It’s important to do this three times, allowing the meat to cool down between sessions; otherwise the meat is hardly enjoyable. Then fry the meat with the onions, season it, and then add the wine, bouillon and cream.

Weight: 3-8kg, depending on time of year

Where to find: Mountainous terrain and sub-alpine pastures at elevations ranging from 800-3,200m

“So sweet!”, coo the tourists. “Shoot them,” say the authorities in Zermatt, where marmots have become a plague.

By swissinfo.ch and Radio SRF

Pop quiz: What’s the national animal of Switzerland? Actually, there isn’t one. But the Swiss National Museum is highlighting four candidates. 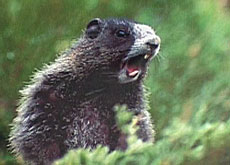 Following in the footsteps of the United Nations, an international family of the four-legged variety is making Switzerland its home. Marmots from ...

Alpine ibex In the thrall of the mountain king

Alpenrose Not a rose but a rhododendron

Immortalized by Swiss singer Polo Hofer, this flowering plant thrives in the Alps and in the Jura region.

Golden eagle The raptor with the unjustified bad rap

This is the only large Swiss predator that survived the days when the bearded vulture, the lynx, the wolf and the brown bear were exterminated.

Fuzzy and white, Edelweiss flowers are a lucky find for hikers, and a ubiquitous sight on Swiss marketing materials.

Emotions run high whenever this elusive creature appears. As wolves make a comeback in Switzerland, they spark feelings of awe and fear.