It’s associated with Christmas traditions and even the ancient Druids but Viscum album, better known as Europe’s most common mistletoe, has a more practical use: as a treatment for cancer patients.

In fact, the healing power of the plant was already known to doctors around the time of Hippocrates, in ancient Greece. However, it wasn't until 1917 that co-founder of anthroposophical medicine Ita Wegman first used it in Zurich as a treatment for cancer, after her colleague Rudolf Steiner had first realised its cancer-specific healing potential.

Ever since, mistletoe has become an increasingly recognised component of complementary cancer treatment, especially in Europe (though it is not yet approved as part of palliative care in the United Kingdom or United States). Here are some of the features that make it so special.

It lives from its tree
Mistletoes are flowering plants, but they don’t form a root and they are wholly dependent on food from the host tree. Their leaves are permanently green, but not optimised for photosynthesis. The material and quality of mistletoe is thus shaped by the mother tree, without which it could not exist.

It grows slowly, but beware of toxins!
Mistletoe bushes grow very slowly. Rather than forming roots and a rapid wealth of leaves, they form fascinating pharmacological and toxic substances: mistletoe lectins are most concentrated in winter and in the older stems, whereas viscotoxins (small proteins that are toxic for various types of cells) are concentrated in the young leaves in summer.

It is harvested not once but twice annually
The mistletoe is harvested separately from host trees in June as well as December. Most commonly it is reaped from stocks of pine, fir, apple tree, oak or elm, which are increasingly cultivated for their mistletoe.

Carefully selected, mechanically crushed and then mixed with water, the mistletoe is subjected to lactic acid fermentation, which enables a gentle extraction of the ingredients. Extracts of summer and winter mistletoe are finally combined in a technically sophisticated apparatus to produce the active pharmaceutical ingredient. 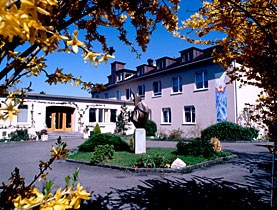 Swiss voters will decide later this month on whether alternative medicine should be a form of treatment covered by mandatory health insurance. ...

Whole forests of Scots pines are dying out in canton Valais, due to heavy infestations of mistletoe. The parasitic plant bores into the host tree ...