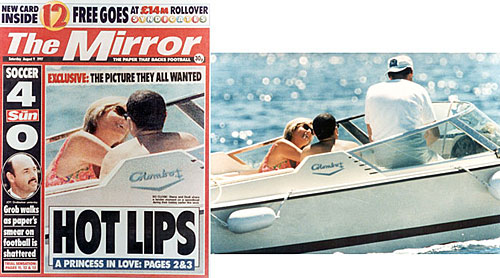 The English tabloid The Mirror used creative journalism to deliver "the picture they all wanted" on its front page. (Foundation for the History of the German Republic). On the right the original photo of Dodi Al-Fayed and Princess Diana (SIPA Press)

A few days after the terrorist attacks in New York on September 11, 2001, the alleged "last tourist photo from the roof of the World Trade Centre" started circulating on the internet. The fake photo became a cult image online. The "tourist guy" was identified as Peter Guzli from Budapest. He created the image as a joke for his friends. (Photos from the internet) 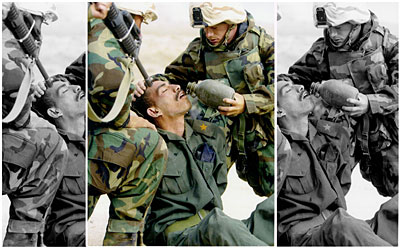 An Iraqi soldier surrounded by American soldiers in the Iraq war in 2003. This example shows how the cropping of a picture can radically change what it appears to depict. (Photo: AP Photo/Itsuo Inouye/Montage: Ursula Dahmen/Der Tagesspiegel)

Beirut after a bombardment by Israeli planes on August 5, 2006. This photo by Adnan Hajj was disseminated worldwide through the agency Reuters. It struck some British journalists as odd that there seemed to be a repeated pattern in the smoke column on the left of the picture. It was later established that the photographer had tampered with the image. The agency apologised, removed all the photographer's images from its databank and terminated the working relationship with Hajj. (Keystone)

March 19, 2005: The Lausanne ice hockey player Eric Landry is fouled during a game against Fribourg Gottéron. He suffered nose and jaw fractures and concussion. His club put in a complaint. The club management presented a photograph to the media showing the severity of Landry's injuries (left). Comparison with a picture taken by the agency Keystone showed that the player's injuries had been digitally enhanced. 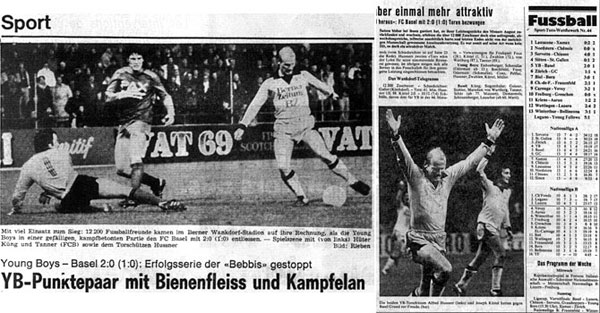 Spot the difference. The local football club in Bern, Young Boys, wore shirts carrying the logo of the Berner Zeitung newspaper in the 1978/79 season. In the pages of the newspaper's competitor Der Bund, the shirt sponsorship logo mysteriously disappeared. Young Boys' striker Alfred Hussner shoots his goal against Basel in the Berner Zeitung with the logo (left), however he celebrates in Der Bund logo-free. (Photos from the exhibition brochure)

Postcard of the original photo of Lenin with Kamenyev and Trotsky (left) on Sverdlov Square in Moscow. Later Lenin's two former comrades were removed from the image. (State History Museum, Moscow)

The Swiss tabloid Blick turned a puddle of water into a river of blood flowing from the temple of Hatshepsut, the site of the Luxor massacre in November 1997 in which 58 tourists were killed by Muslim extremists. (Photo: Michael Jensch, Axel Thünker, Foundation for the History of the German Republic; AP PHOTO/Mohamed El-Dakhakhny.) 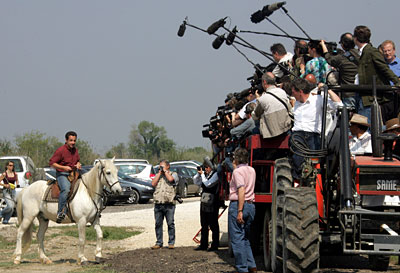 French presidential candidate Nicolas Sarkozy takes part in a photo opportunity in Saintes-Maries-de-la-Mer in April 2007. A look behind the scenes reveals the working methods of mass communication. Reality appears in a different light. (Keystone) 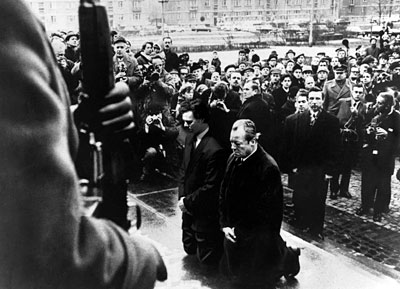 German artist Matthias Wähner alters historical photos by inserting himself into them. (Photo: Matthias Wähner/Foundation for the History of the German Republic) 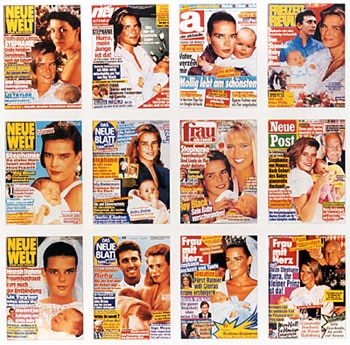 Princess Stéphanie of Monaco, darling of the international tabloid press, "posing" with various babies, sometimes weeks before the actual birth. (Courtesy of Spiegel-Verlag)

The picture they all wanted turned out to be doctored.