Parliament has pardoned a woman who helped smuggle wartime refugees - mostly Jews - into Switzerland during the Second World War.

Aimée Stitelmann became the first person to benefit from legislation introduced on January 1.

The law grants a pardon to anyone imprisoned or fined for helping refugees get into Switzerland during the Nazi era but does not require compensation to be paid.

Between 1942 and 1945, Stitelmann – herself a Jew and now 79 years old – helped around 15 people, mainly orphaned children, cross the border secretly from France to Switzerland to escape the Nazis.

“I believe it’s very, very important to publicly recognise the work of these people. It’s to Switzerland’s credit,” said parliamentarian Martine Brunschwig Graf, a member of the commission which granted the pardon.

Helping refugees enter the country was considered a criminal offence and refugee helpers risked fines, the loss of their jobs or even imprisonment.

In 1945 Stitelmann was sentenced to 15 days in a military detention camp after she was caught trying to lead two refugee helpers into France. Ever since, the Swiss authorities have kept detailed records of all her activities.

During the war, Switzerland accepted around 300,000 European refugees, but it also turned away at least 20,000 people – mainly Jews.

At the same time several thousand Jewish refugees were helped by local people.

To maintain its neutral status and to prevent an influx of wartime refugees, Switzerland imposed strict controls along its borders.

The Swiss government apologised officially for its treatment of wartime refugees in 1995.

And moves to change the law on granting pardons to refugee helpers began after parliamentarian Paul Rechsteiner tabled a parliamentary initiative.

Rechsteiner set a precedent when he won a posthumous pardon for Paul Grüninger, a Swiss police officer prosecuted for faking documents to save thousands of Jews from the Nazi regime.

In 2002 the government declared that the punishments handed out to those who had helped refugees during the war had been unjust. Parliament approved a change in the law in June 2003

Stitelmann is the first person to have her name cleared; the cases of another 27 people are still pending.

“It’s important that the commission’s work is transparent and that its decisions get as much coverage throughout the Swiss media as possible,” Brunschwig Graf told swissinfo.

Aimée Stitelmann is the first wartime refugee helper to be granted a pardon under the new law.

She helped around 15 refugees cross the French-Swiss border between 1942-1945.

Switzerland accepted around 300,000 European refugees during the war, but turned away at least 20,000 people, mostly Jews.

The Swiss government apologised officially for its treatment of wartime refugees in 1995. 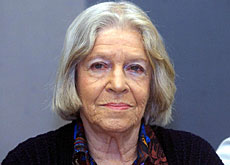 A woman who helped Jews cross into Switzerland during the Second World War is seeking rehabilitation under a new Swiss law. Aimée Stitelmann ...

Swiss people who were punished for helping victims of the Nazi regime cross the Swiss border will now be pardoned under a new law. But the ...