Nestlé’s decision to invest in the Democratic Republic of Congo by building a new factory has been met with scepticism about how much the local economy will benefit.

The Swiss-based food giant announced two months ago that it would spend $40 million (SFr41.9 million) over the next three years on a factory in the capital Kinshasa. It will produce culinary and coffee brands including Nescafé 3-in-1 and Maggi stock cubes.

But the granting of generous tax benefits to the group’s Congo subsidiary has fuelled debate in the local business community.

With its wars and political instability, Congo has not been an attractive option for foreign investors in recent decades. It was ranked 182 out of 183 countries for its weak business regulations in the World Bank’s Doing Business 2010 report.

But spurred on by a series of measures taken by President Joseph Kabila’s government to improve the business climate such as joining the Organization for the Harmonisation of Business Law in Africa, Nestlé took the leap.

Construction is now underway on a factory in the industrial district of Kinshasa.

It is an investment that will "facilitate the availability and adaptation of its products to some 70 million Congolese consumers, a huge market in Africa", says Philip Bassem, CEO of Nestle Congo.

The plant is expected to start production by late 2010. But its strategy of first using imported packaging, coffee and ingredients for producing bouillon cubes, and only changing to locally sourced raw materials by 2011, has aroused criticism.

Not all of the local business community believes Nestlé’s investment will bring real financial benefits to the country.

Some members of the Congo Business Federation have denounced the government’s largesse in allowing Nestlé to enjoy a unique tax status, despite the apparent lack of a guarantee that it will create the added value of more than 35 per cent needed to qualify for tax exemption.

The group will not have to pay taxes, duties and import taxes on raw materials for three years.

Nestlé, based at Vevey on Lake Geneva, told swissinfo.ch that the added value of its initial investment in Congo was “exceeding the requirements stipulated by the local authorities to benefit from the investment subsidy scheme”, a calculation “confirmed by a third party external to Nestlé Congo”.

Nestlé said it would create employment for up to 300 employees by 2012 and indirect employment for local companies that provided materials and services to its factory.

The tax advantages are deemed by many industrialists as "discriminatory and undeserved". As a result the government plans to do away with tax breaks which are ruining the treasury as they are constantly being granted, although only the finance ministry has the power to do so and claims to grant them sparingly.

Bassem, convinced Nestlé merits the tax breaks although he cannot precisely quantify the company’s added value, says "this investment will generate more than 230 new jobs by 2012, when a second plant will open, exporting part of the production in the Democratic Republic of Congo’s neighbours”.

Eventually, more than 300 people will be employed by the Congolese subsidiary, in addition to the 70 employees already working at the offices in Kinshasa, Lubumbashi and Goma.

New ambitions of the world’s largest food group are raising fears about its ownership of arable land, especially coffee plantations, to the detriment of local farmers.

Nestlé says it is actively reviewing options to source local raw materials but they have to respect standards for their products and ensure a long-term and stable supply.

Fears about land use are based on experiences of farmers in other countries, and what they see and hear on the television and radio. Bassem rejected these fears in an interview produced by Nestlé and published in Kinshasa newspapers.

“Nestle has no desire to appropriate, or even acquire farmland to invest in the production of its raw materials.

"We leave that activity to the care of local producers to contribute to the creation of economic prosperity in the country,” Bassem told Congo’s Observateur newspaper.

The company did not comment further. But Nestlé Congo does run a social project called New Hope which aims to strengthen the entrepreneurial skills and income of poor women by giving them the opportunity to sell Nestlé products like Nescafé, Nido or Cerelac.

In Congo, however, there are still hopes that Nestlé’s investment will, over time, help boost the emergence of a middle class and improve the living conditions of thousands of small producers.

During a reception organised in the garden of the Swiss embassy in Kinshasa on Swiss National Day (August 1(, Ambassador Linus von Castelmur was positive about the country’s situation.

He said Congo’s recent achievement of the completion of the programme for Highly Indebted Poor Countries showed an "encouraging start of macroeconomic stabilisation”, with a cancellation more than 90% of external debt, estimated at nearly $14 billion.

"Switzerland is interested in Africa and the Democratic Republic of Congo," says von Castelmur, echoing remarks by Swiss Foreign Minister Micheline Calmy-Rey, during her visit to Kinshasa last February.

Each year, Switzerland contributes $30 million in the form of humanitarian assistance, development cooperation and support for stabilisation

The $40 million factory in Kinshasa is part of a SFr150 million investment by Nestlé in equatorial Africa over the next three years.

This zone has 400 million potential consumers. By 2012, Nestlé expects to create 750 jobs in the region.

The group will extend existing capacities in Zimbabwe by SFr35 million and in Kenya by SFr30 million.

Chocolate bar lovers may soon have to pay more for their treats as a consequence of poor harvests and financial speculation driving up the price ...

Coffee is set to make a splash in the French courts after Swiss food giant Nestlé was stirred into launching legal action against a rival this week.

The Swiss-based food and beverage giant, Nestlé, has turned in a solid performance for 2009 and expects to see higher growth in 2010. Nestlé, ... 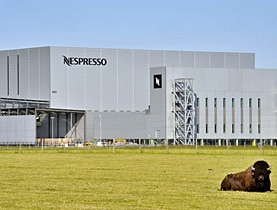 Nespresso plant opens in Avenches – where else?

Advertising Swiss products Switzerland exports products all over the world. We take you on a quick journey around the planet to uncover Swiss ...

Chocolate is said to reduce the risk of cancer and cardiovascular disease, as well as making you feel happier by releasing the hormone Serotonin.