In Switzerland churches of the state-recognised faiths – mainly Catholic and Protestant – receive SFr1.9 billion ($1.9 billion) annually from the cantons via taxes on individuals and companies. But amounts and tax regimes vary hugely by region.

“We don’t think what they did was correct but we have to look to the future and alert our partners as there will be a shortfall in the money available and we need to assess the damage.”

Bader was referring to the decision by Philip Morris to stop paying SFr1.5 million in voluntary church tax to the canton of Neuchâtel in western Switzerland . The company employs some 1,300 people in the canton, at a cigarette factory and tobacco research centre and is its largest taxpayer.

The Protestant church was due to receive SFr800,000 from the tax, while the local Roman-Catholic Federation would have got SFr700,000 and the Christian Catholic church SFr20,000; these represent ten and 15 per cent of the Protestant and Roman Catholic churches annual budgets, respectively.

Bader regrets the suddenness of their decision made in October, which affects outgoings for 2010 that have already been made.

“And it’s extremely serious that we were kept out of recent talks between Neuchâtel government and Philip Morris concerning the tax,” he added.

Philip Morris says it took the decision under internal global regulations, which “exclude support to religious causes”, Patrick Lagadec, the company’s spokesman explained, adding that the churches were informed about funding being ended at the end of 2008.

The three churches, which have a total budget of SFr3.6 million allocated to regional social programmes, say the cuts threaten services at the Protestant Social Centre, Caritas, funeral services and religious support in prisons and health centres.

For the moment it is not clear whether the local authorities will be stepping in to meet the churches’ sizeable funding shortfall.

In Switzerland, churches of the state-recognised religions – Roman Catholic, Protestant, as well as the much smaller Christian (or "Old") Catholics (who broke from the Roman Catholic church in the 19th century) and the Jewish community - are financially supported by the cantons. This support comes from a tax levied on those individuals who declare their religious affiliation on their tax form and, since the 1960s, on companies.

“That was when the churches ceased to be state entities and were transformed into public law corporations,” René Pahud de Mortanges, director of the Institute of Religious Law at Fribourg University, told the Swiss News Agency.

Cutting the churches’ ties to the state did, however, have an impact on their income.

"State churches used to get most of their money solely from the cantons but more recently they have been mostly funded by members," said Pahud de Mortanges. This meant a reduction in revenue. That was when church tax started to be levied on businesses, in order to make up the deficit, he explained.

Under Switzerland’s cantonal system, church tax has evolved into a complicated mosaic.

Most cantons now have a compulsory levy on companies. The only ones without it are Solothurn, Basel-City, Schaffhausen, Appenzell Inner-Rhodes, St Gallen, Aargau and Geneva.

Neuchâtel and Geneva, which have a strong secular tradition, are the only cantons where payment of the church tax by individuals and firms is voluntary.

In Neuchâtel the percentage of people paying their non-compulsory church tax has fallen by half over the past forty years.

As a result, Neuchâtel churches are among the worst off in Switzerland, according to recent research by the Swiss National Science Foundation.

Half of the public funds come from cantonal church taxes on companies based in Switzerland, or SFr264 million. The taxes are collected with scant regard to firm’s areas of activity.

“We feel each company in some way has a duty to share some of the added-value it has created in the region; Philip Morris has done this via jobs and paying taxes but it should also do this via the church tax,” lamented Bader.

But not everyone agrees, like this contributor to this week’s Tribune de Genève newspaper letters page.

“I am shocked by the ethics of these churches. How can churches that promote life accept money from an industry that sells deadly products? Before accepting such money that discredits them they should reflect a bit more on their morals,” he wrote.

In Switzerland, churches of the state-recognised religions – Roman Catholic, Protestant, Christian Catholic and the Jewish community – are financially supported by the cantons. This takes the form of a tax which is levied after the payer declares his or her religious affiliation on their tax form.

Church tax accounts for about eight per cent of taxpayers' cantonal tax bills. Taxpayers pay taxes to their community, canton and federal government. The church tax is levied to cover church expenses and varies from canton to canton.

In Neuchâtel some 800 people work at a factory producing cigarettes for the domestic Swiss market and for export, while 500 work at a research and development centre.

Some 1,700 work in Lausanne which is home to Philip Morris SA, responsible for sales and marketing activities in Switzerland, and to PMI’s worldwide operations centre

The company is reportedly the largest private employer and taxpayer in canton Neuchâtel. The firm also supports cultural, educational and associative activities in cantons Neuchâtel and Vaud.

With a view to attracting new members, Swiss Capuchin friars have come up with some clever ways of marketing themselves. In early November they ...

The dispute over crucifixes in schools has once again come to the fore with the firing of a schoolteacher in canton Valais who took them down. ... 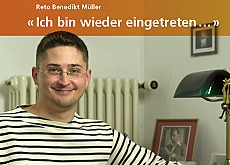 State-recognised churches in Switzerland are so desperate to stem the exodus of believers that they are even resorting to professional marketing ...

How a former pimp found his true calling. In his former life Jo Scharwächter was a pimp and a criminal. Then he found God and became a pastor.